The Cross, The Archpriest Christ’s Symbol of Redemption

The feast of the Veneration of the Cross is undoubtedly one of the greatest in Orthodoxy and is especially loved and honoured by members of the Church.

The focus of the feast- which the faithful are invited to venerate- is the Precious Cross, upon which Christ, after He had stretched out His holy palms, ‘united what had been divided’. God died in the flesh and, with His ultimate sacrifice, His love and submission, which culminated in the mystery of divine self-emptying, He atoned for sinful people before our holy God, satisfied divine justice for the sins and guilt of the whole world, redeemed His creation from the evil of the devil and the snare of death, pledging His most holy Blood as ransom. This blood was not that of an ordinary person, but of the Son of the Virgin and God. With His passion, He demolished the separating wall of hatred which had been created between people and God from the time when we were cast out from the ancient paradise of Eden because of our senseless disobedience. Through His death on the Cross, Christ dispelled the power of the devil, dealt death to death and opened wide the path which leads to the bright tabernacles of the heavenly kingdom. On the Cross of Christ, humankind once again became citizens of Paradise, we returned to our true home, mounted the real pedestal of our existence and cast off the threadbare tatters in which we were clothed by our senseless misdemeanour in Eden. […] 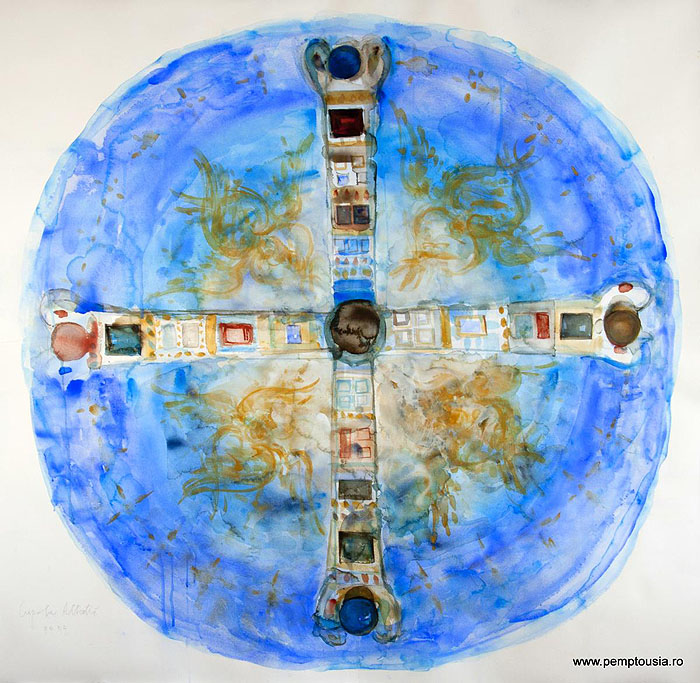 The Precious Cross is the symbol of Christ’s redemptive work. On His holy Cross, a mighty battle was fought. All the dark forces of sin, inspired by the demonic spirit of apostasy, hastened to crucify the Son of God and the Virgin, the Lord of Glory. Unknown to them, of course, they were fighting a losing battle. They clashed with the lightning of divine wrath, which seared their malformed flesh, forestalled the dread mechanism of deceit, and made a mockery and example of the forces which opposed Christ. ‘It is, indeed, a terrible thing to fall into the hands of the living God’.

The blood of Christ washed away the opprobrium of sin which had marred our recalcitrant nature from the moment when our forebears had so senselessly trampled upon the commandment of God. It rid us of the tatters in which our nature had been clad  by the wicked serpent, the father of lies and slayer of humankind. It returned our fallen nature to its former nobility and glory, restored our ancient beauty, endowed it with the effulgence of the divine energy which had blazed upon it before the Fall. It shone upon the God-like and God-formed creation which was lifeless in the dark and saturnine depths of Hades. It made humankind the children of God and God by grace!

Our Church is proud of the Precious Cross, the symbol of its theanthropic hypostasis and of its struggles. It places its joy and its hope in it. In its holy shape it sees the great triumph of the faith, the victory over the forces opposing Christ which suffocate it and war against it in an effort to annihilate it. And the Church honours and glorifies the most Precious Cross. It incorporates it profoundly into its worship and its places it at the centre of the veneration of its flock.

On the third Sunday of Great Lent it is displayed with festal joy, devotion and all due respect in the middle of Orthodox churches, in an invitation to the faithful to venerate it, to draw blessings and grace from it and strength for the harsh struggle for virtue and the noble skirmishes against visible and invisible enemies.

The Gospel reading reminds us of the ground rules for this struggle, which are:

‘We bow before your Cross, Lord, and we hymn and glorify your holy resurrection’, we sing with dignity and joy in our Orthodox churches. This is the victory cry which fills and resounds in the soul of Orthodoxy, which is profoundly rooted in the Saviour’s Cross and Resurrection, in these twin pillars of God’s dispensation. In the end, death was swallowed up and the world was decked in God’s beauty, in immortality and incorruption. Because the Easter to which Great Lent aims and where it ends is the Easter of the Cross and of the Resurrection. The Cross culminates in the Resurrection; the Resurrection is rooted in the Cross. You can’t split the one from the other. The Cross enjoys great honour in Orthodoxy and it matters not if the heterodox condemn us for supposedly ignoring it in our theology and leaving it in the shade. It’s celebrated with brightness and redemptive tones of joy as are the Resurrection and Easter. These two are the unfailing axes along which Orthodox moves, the one holy catholic and apostolic Church of Christ.

I pray wholeheartedly that, from the feast of the Veneration of the Precious Cross, which falls in the middle of Great Lent, we will draw strength and blessings in our spiritual effort in the arenas of the virtues and that we will peacefully reach Great Week when we will worthily celebrate the holy Passion and glorious Resurrection of our Saviour Jesus Christ.