The Doxastiko at Lauds on the 1st Sunday in Lent

When we commemorate the saints for the first Sunday in Lent, the Sunday of Orthodoxy (when we read the Synaxari), we see: on that day, the first Sunday of the Fast, we commemorate the memory of the restoration of the holy and venerable icons, effected by the Emperors of Constantinople, Michael and his mother Theodora, of blessed memory, in the reign of Saint Methodios the Confessor, Patriarch’. In other words, we celebrate the adoption of the feast of Orthodoxy, which was established triumphantly by the Synod of Hierarchs residing in Constantinople [Σύνοδος ενδημούσα] on 11 March 843. In establishing this feast, the Synod applied the resolutions of the 7th Ecumenical Synod.

But the hymns for the feast don’t refer exclusively to the Fathers who attended the Synods, especially those of the 7th Ecumenical, and the dogmatic events of the period of the iconoclast schism. They also mention, at the same time, the Prophets of the Old Testament, headed by Moses, as is apparent in the stichera at Vespers [1] and in the doxastiko at Lauds in Matins. 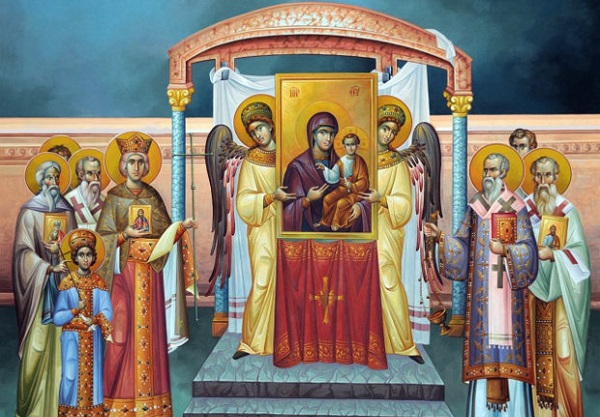 This doxastiko reads:
‘In the time of abstinence, Moses received the Law and proclaimed it to the people; by fasting, Elijah closed the heavens; and, through fasting, the three Sons of Abraham overcame the lawless tyrant. Through fasting, make us worthy also, Savior, to attain the Resurrection, crying aloud: Holy God, Holy and Mighty, Holy and Immortal, have mercy upon us’.

There is another reference to Moses and the other prophets of the Old Testament in the Epistle reading, where, in his letter to the Hebrews, the Apostle of the Gentiles says:

‘Brethren, by faith Moses, when he had grown up, refused to be known as the son of Pharaoh’s daughter. He chose to be mistreated along with the people of God rather than to enjoy the fleeting pleasures of sin. He regarded disgrace for the sake of Christ as of greater value than the treasures of Egypt, because he was looking ahead to his reward. (Heb. 11, 24).

The Prophets of the Old Testament appeared in Israel at times of apostasy and idolatry among the people. They checked the idolatrous aberration which polluted the tribes of Israel and preached that God is one, unique, true, transcendent and universal. The prophets believed that the God of Israel was not a national God, but universal, which is why they emphasized His universality. The main task of the prophets, as instruments of God, was to guide Israel in its great mission, which was, on the one hand to understand and observe the Testament which had been agreed with God on Mount Sinai; and, even more importantly, to prepare Israel and through it the whole of humankind to agree a New Testament, through the mediation of the Messiah, Who was foretold by the prophets and awaited by the people of God. 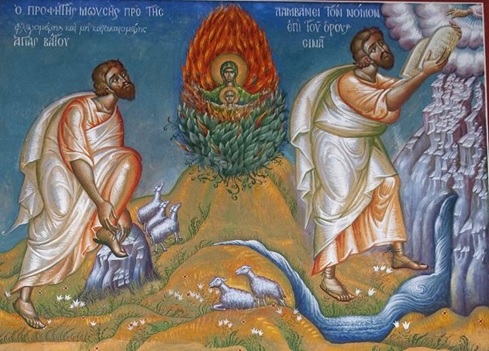 On Mount Sinai, Moses received the Law of God and, according to the information provided by the books of Exodus [2] and Deuteronomy [3], throughout the whole of the time of the forty days that he spent on the mountain, Moses ate no bread and drank no water. Saint Basil the Great adds that, had Moses not been armed with the virtue of fasting, he wouldn’t have been in a position either to receive the Law or even to reach the top of the mountain.

This is why, at the end of the first week of the fast, on the first Sunday, the Sunday of Orthodoxy, the hymns of the Orthodox Church highlight the personality of Moses and the other prophets of the Old Testament, who achieved feats beyond the comprehension of the human mind. These feats were achieved by the prophets of the Old Testament through strict fasting, prayer and exclusive dedication to God. So it is that the Holy Church emphasizes their living example on the first Sunday of Lent, as models of people who have attained sublime spiritual states through the observance of the fast, as commanded by God.

In other words, no sooner had God made our ancestors than He put them into the garden of delight and tested them, giving them only one commandment: not to eat of the tree of the knowledge of good and evil. This was a command to abstain and was given not as a restriction on freedom, but as training.

This is why Christians are called upon from the very first week of the fast, which culminates in the celebration of the triumph of Orthodoxy, to imitate the outstanding personalities of the Old Testament, become worthy children of Abraham and able to pass through all the stages of the virtues.

Notes:
[1] ‘The prophets, inspired by your Spirit, Lord, foretold that You, Who cannot be comprehended, Who shone forth in eternity before the morning star from the immaterial and bodiless belly of the Progenitor… Your prophets who preach You by word…’.
[2] ‘And Moses was there before the Lord forty days, and forty nights; he did not eat bread, and he did not drink water; and he wrote upon the tablets these words of the covenant, the ten sayings’ (Ex. 34, 28).
[3] ‘when I went up into the mountain to receive the tablets of stone, the tablets of the covenant, which the Lord made with you, and I was in the mountain forty days and forty nights, I ate no bread and drank no water. (Deut. 9, 9).