The Liturgical Context of the Veneration of the Cross

On the 3rd Sunday of Lent, and, indeed, throughout 4th week, a time within the reverential climate of the fast which is so beneficial to the soul, the Church displays the Precious Cross of the Lord, for the support of the faithful. The appointment of the veneration of the Cross on that day, the mid-point of the fast, was also made for another, practical reason. The commemoration of the finding of the Precious Cross by Saint Helen is celebrated by the Orthodox Church on 6 March, as is clear from the corresponding date in the Feasts of the Month.

That day, 6 March, almost always fall in Lent. Given that the atmosphere of those days is one of mourning, and that, in accordance with canons 49 and 51 of the Synod of Laodicea and 52 of the Quinisext Ecumenical Synod, a full Divine Liturgy is not to be held on weekdays, the feast cannot be celebrated with fitting splendor. The fathers of the Monastery of Studion, in Constantinople, who re-organized the services of the Triodio in the ninth century, transferred the feast of the Cross to the 3rd Sunday of Lent, the mid-point of the fast, and established the practice of placing it in the middle of the church for the faithful to venerate. 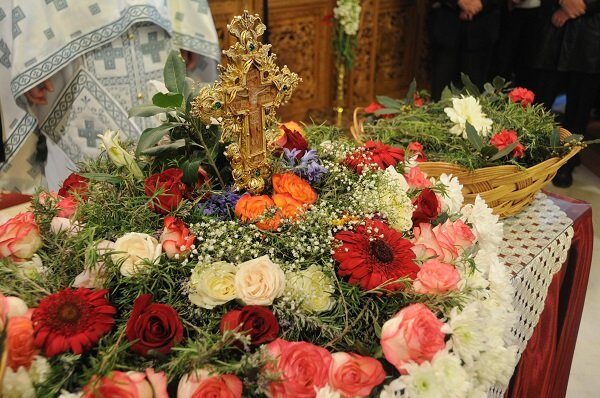 On the basis of all this, the Church elevates its most powerful weapon in the midst of the Eucharistic body. The rubrics for the ceremony are as follows: after the end of the Doxology, while the choir is singing the Thrice-Holy Hymn, the priest exits by the north door of the sanctuary, bearing the Precious Cross on his head, on a tray decorated with flowers, and with three lighted candles, which symbolize the Trinity of the hypostases of God. When he reaches the center of the church, he approaches the small table- ‘four-legged’ according to the rubrics- and walks round it three times. He then stands to the west of it, facing east and exclaims ‘Wisdom, let us attend’. He then sets the Cross and the tray on the table. He circles the Cross three times, censing it, and singing the tropario ‘Lord, save your people and bless your inheritance’, which is repeated by the choir. He then venerates the Cross three times, singing the tropario ‘We bow before your Cross, Lord and we glorify your holy Resurrection’, which is also repeated by the choirs. The Cross is then kissed by the priest and the laity, while the choir sings the appointed hymns until everyone has venerated the Cross, taking some of the flowers as a blessing. There follows the Dismissal Hymn, ‘Lord, save you people’, and the Divine Liturgy begins.

The more modern custom of holding the veneration of the Cross at the end of the Divine Liturgy, after ‘The name of the Lord be blessed’ is not found in any of the formal orders of service. It has no ritual status and is best avoided, despite the benefit it has for latecomers. Moving the ceremony to the end of the Divine Liturgy alters both its structure and the rich content of its symbolism.

The Cross remains in the center of the church for veneration until the 9th hour of the Friday of the following 4th week of Lent. After the priest has read the prayer: ‘Most Holy Trinity, consubstantial power’, at the end of the 9th hour, he leaves the sanctuary, approaches the Precious Cross in the middle of the church and, having censed and venerated it, takes it back into the holy altar, blessing the faithful with it and being preceded by a server holding a candle and incense.

The bright window of the Resurrection, which is opened by the opportunity to venerate the Precious Cross is abundantly clear in the hymns for the day. The canon at Sunday Matins is a typical example. Apart from its content, which is related to the Cross and Resurrection and shows us the connection between the Cross and Christ’s three-day victory, even the external morphology of the canon prepares us for the joyous event of the Resurrection. The canon in question was composed on the model of the Matins canon at Easter, that is, it’s set to music in tone 1, on the basis of the irmos of the first ode, ‘The Day of the Resurrection’. The tidings of the Lord’s Resurrection run all through the canon, though always in connection with the veneration of the Precious Cross.