The voice of Archbishop Anastasios of Albania from the other end of the telephone exudes as always serenity and wisdom. Either in person or from a distance, His presence sooths; in all difficult conjectures and even more so in this unprecedented situation we experience on the universal level. He Himself is now in confinement, seeing His daily life drastically changed: “Here in Albania, we too are adjusting to the government’s orders and the instructions of the medical authorities. After a discussion with the members of the Holy Synod we promptly made the proper decisions relating to the liturgical, educational, catechetical, and charitable ministries of our Church. What I have learned over the course of a long lifetime is, asking for God’s help, to look for new pathways out of the gorge of hardships”.

Further, I asked Him if the compulsory social distancing for us, the citizens, has the features of a temporary monasticism. “It is worth recalling that the Orthodox monasticism to which you referred is inspired by three basic principles: obedience, chastity, and poverty. Something that could be drawn from this great tradition, for example, would be obedience: obedience to those responsible for dealing with the crisis, obedience to the experts working on treatment and research, obedience to the ‘stay home’ injunction. Let our home become our hermitage. It is not easy. The danger of conflict and strife from the restrictions is ever-present. As we remain at home, let us not become isolated. Let us support one another with words, with an affectionate silence, with a cheerful disposition”. 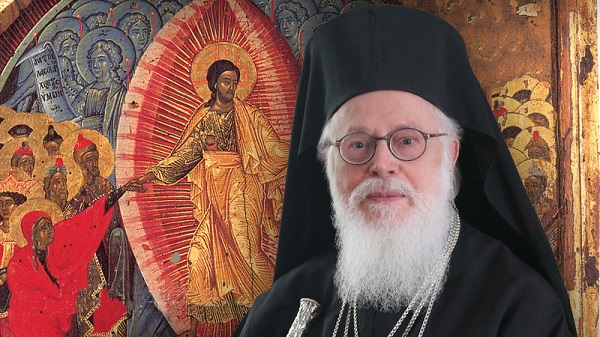 “We must take care however,” He notes, “not to confine our interests to our own family. There are many people facing greater difficulties. Modern electronic media enables us to be near them. We need to engage in the struggle to banish the fear that hangs over us. Finally, let us become more moderate in our daily lives. Your mention of monasticism reminds me of an admirable definition from the Philokalia: “A monk is one who having been separated from all is also united to all”.

How can we fight the continuous state of fear that came with the pandemic? “Fear is indeed a very dangerous counselor”, underlines His Beatitude, “it seeps into our thoughts and our volition in many different ways, sapping our endurance. I believe that the syndrome of fear can be countered by faith in the God of love, and by practicing love in action. As St John said: “There is no fear in love, but perfect love casts out fear” (1 John 4:18). As Christians we believe that the sense of the presence of God frees us from all fear: “Yea, even though I walk through the valley of the shadow of death, I will fear no evil: for you are with me”, declares the Psalmist. And the poet Ioannis Polemis adds: “Fear not the one who based his hope on faith; in life I saw him do battle, but always I saw him invincible”.

However, even if someone suppresses the anxiety about the virus, they dwell with ominous thoughts about the future of the economy at a moment that a boost was predicted. How can we face this? “First of all, by not letting these gloomy become the ‘homeowner’ of their minds” he states. “Obviously, the problem exists. This pandemic is not only spreading disease, but it is also causing broader economic complications. It is particularly catastrophic for countries that have recently come through a financial crisis, like Greece, and countries with limited economies, like Albania. We hope that all governments will make the right decisions. The richer countries ought to help the poorer, where economic and social problems that stem from the crisis will be more acute. The global wealth-holders – multinational corporations, groups, organizations, foundations, individuals – ought to act with generosity”.

He continues: “At this time, the Corona Virus seems to advise: ‘Take a new look at the values and the type of humanism you boast of having. All you humans are a single family’. With regard to treatment and dealing with a new outbreak of the pandemic, no country can succeed on its own. The same principle should apply to overcoming the economic crisis. This certainty is, of course, being undermined by various individual, social, and national interests. Personally, I believe that the truth has its own dynamic, both in science and in social life, and it will prevail”.

He adds: “The two World Wars brought about radical changes in the life of mankind, overturning alliances, ambitions, economic theories. I think that this new unprecedented global war will also play a role in the rethinking of our values and priorities. World War II was followed by a series of declarations of human rights, with an emphasis on the individual. It is obvious that what are needed now are declarations of human obligations regarding the huge responsibilities for the destruction of the environment and climate change”.

– Has the trial that we are going through now helped for the awakening of solidarity? Will it endure in the future?

– “Great disasters bring out amazing virtues surging forth from the depths of the conscience of our people, qualities such as decency, solidarity, and self-sacrifice. You see, the DNA of our people, influenced by the Christian faith, has concentrated unique values. I have repeatedly observed that the real enemy of any form of peace is not war but egocentrism–personal, racial, ethnic, and religious. And the antidote to this is solidarity inspired by love –the fulfillment of which was revealed by Christ. The flowering of solidarity is a hopeful phenomenon. Now, how long it will endure, I do not know. I am however persuaded that we all have a duty to strive to promote the universal Christian values”.

Faith, the most effective antidote to every kind of fear

“I ponder on how pandemic has taken unaware the general staffs of the world’s largest countries. They had not foreseen this invisible, vehement enemy. I am persuaded that only a universal mobilization of solidarity will defeat the pandemic and its side effects. The semantics of reputable humanism needs to be re-examined. We need a humanism that respects the psychosomatic unity, of the individual and of the whole human race, and that ensures justice for all, without exception. The ideal for the continuance of humankind cannot consist of the right of the strongest and the globalization of technology or the economy, but rather the globalization of solidarity. And I think that the contribution of religion is critical here”.

His Beatitude adds: “In times of trial the human soul spontaneously seeks a refuge from pain, seeks protection and consolation, in religious faith. Those of us who granted to believe, we know that the human being is not the author of him or herself. There is a Supreme Reality. For Christians He is the inconceivable and yet truly existing Being, the Triune God of love. His relationship with humankind is unchanging, and He has given us the right to ask for His help ‘in all times’ and especially in times of ‘dangers and sorrows’.

Religious experience is innate in humankind. Just as water exists in all living organisms in different forms, so religion exists in all the civilizations of the world. It exists in its familiar form, or like water vapor in the atmosphere of indifferent or non-religious communities. The faith that seems to emerge from the depths of the Christian consciousness will certainly help people deal with the fear generated by the pandemic. Those of us who have the gift of faith should take care to nurture it, with humility, study, and prayer, asking, like the disciples, ‘Lord, increase our faith’. Faith is the most effective antidote to any kind of fear. Nor let us forget to pray for those who find difficulty in believing. That is a duty of love and respect towards their search.

As Easter approaches, let us try to live more profoundly the Christian experience that leads from the pain of the Cross and the anguish of the Passion to the jubilation of the Resurrection. Therefore, a Blessed Easter with the resurrectional light of peace and hope in our hearts”.