Blessed are they who have not Seen

Some joke that Thomas Sunday is the name-day of unbelievers. Certainly, unbelief is hardly a virtue to rejoice over, nor should we congratulate those who have it. Even though some hymns consider Thomas’ unbelief to be ‘good’, it’s still a flaw. This is how Saint John Chrysostom sees it. Referring to Saint John the Evangelist, he says: ‘See how the apostles love the truth. They don’t hide their own flaws, nor those of others, but record them with great honesty’.

He deigned to be touched

This is why Chrysostom notes that Christ’s encouragement to Thomas to touch him and not be unbelieving but a believer isn’t merely a suggestion, but a rebuke. He says: ‘He used the words as a sharp reprimand’. Another interpreter, Zigavinos, observes that Thomas is justly condemned because he didn’t trust his fellow disciples, who were the most reliable witnesses of the Resurrection. Of course, these same disciples hadn’t believed the myrrh-bearing women when they told them that they had seen the risen Christ. 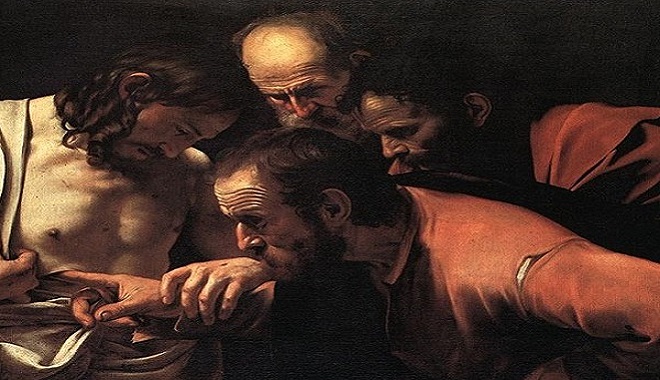 After His resurrection, Christ continued to show understanding of  the weaknesses of His disciples and He appeared to them in order to support them in the proper faith. For eight days He left the one who wasn’t there when He first appeared, both so that he could hear about it from the other disciples and also that Thomas’ desire to see Him would be heightened, according to Saint John Chrysostom. He appeared again, in order to confirm His resurrection to one disciple. And He didn’t wait for Thomas to ask, but invited him straight away to touch Him. Chrysostom concludes in amazement: ‘See the Lord’s  loving-kindness!’. And together with him, we sing: ‘Lover of mankind, great and immeasurable is the host of your merciful acts, for you deigned to be touched by the apostle’ [doxastiko at Vespers for Thomas Sunday].

Certainly Thomas’ unbelief is different from all the qualifications and the various justifications we come across in today’s world. Thomas had believed that Christ was the Messiah. This faith had been reinforced through his daily contact with Him, through listening to Him preach, experiencing His divine power, which was manifested in His many miracles. He loved and trusted Him so much that when he realized that He was going to Jerusalem for the last time, he said: ‘Let’s go and die with Him’.

But things turned out differently. After Christ’s arrest, Thomas abandoned Him, as did the other disciples and they all hid, out of fear.

Thomas was deeply disappointed and his hopes were dashed. Where was He ‘Who was to redeem Israel? Christ’s cross and death shattered his faith in His divinity. When the other ten disciples told him they’d seen the risen Lord, however, it was rather difficult to dismiss their words as mere ramblings, so he compromised by saying he would see Him, but also wanted to touch Him.

A condition for faith

In today’s world there are a lot of people who wouldn’t believe even if they witnessed miracles. Partly because of our secular life-style, partly their passions, partly because of their total reliance on reason and the supposed all-pervading power of science, they’ve been blinded to such an extent that, as the Patriarch Abraham says to the rich man in the parable, even if they saw someone risen from the dead they wouldn’t believe.

There is, however, a more common form of unbelief- that of the hypocrites who, according to the Prophet Isaiah, honor God only with their lips, whereas their hearts are far away  from Him. Saint Paul says that these are hearers of the law of God rather than practitioners of it. They’ve looked into the mirror of God’s law- as Saint James, the brother of the Lord tells us- seen where they’re found wanting, but have then departed and forgotten what they saw.

God’s commandments  truly liberate us from sin and it’s only by keeping them as a reference point and attitude that we can become doers of God’s law and acquire genuine and firm faith in Him. Then we’ll have no need to see the risen Christ with the eyes of our body nor to touch Him. We’ll have experienced the power of the Resurrection  in our own personal life because- through our struggle of repentance- we’ll have been crucified, buried and raised together with Christ. Then we’ll be worthy of the beatitude: ‘Blessed are those who have not seen and have believed’.