Corona and the New Tower of Babel

The editors and staff of both the online magazine Pemptousia, which focuses on Orthodoxy, scholarly research and culture, as well as the Orthodoxia News Agency have become aware of the crucial need for all of us to unite our voices and to strengthen the presence of the Orthodox world, especially now amid this ominous pandemic.

Moreover, the International Association of Digital Media and Orthodox Pastoral Care is participating, along with its members, associates, researchers, lecturers and clerics, in this initiative with Pemptousia and the Orthodoxia News Agency.

Today we present an article by Fr. Antoine Melki, Associate Professor, Department of Computer Science, University of Balamand and Member of the International Association of Digital Media and Orthodox Pastoral Care, DMOPC. 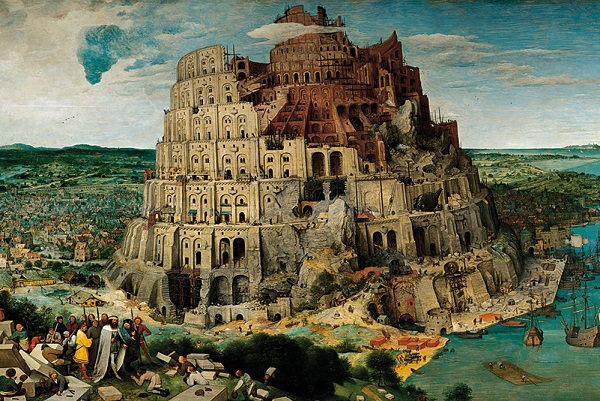 The Orthodox Church begins the fourth week of Lent with the Veneration of the Holy Cross, and thus stresses that the cross is at the middle of the cosmos the way it is at the middle of Lent. In the evening prayer on Thursday of this week, after the church chanted “We deserved to see your holy cross and shake hands with joy”, comes the reading of the story of the Tower of Babel from the Book of Genesis (1: 10-9).

In this narration, we learn how the human race spread on Earth. Because humans, in their pride, wanted to build a tall tower that would reach the sky, but God confused their tongues. This account is a great turning point in the history of the people who after the flood inclined to go away from God and sought to glorify their own efforts, forgetting the inner peace that God had given them after the flood. That is why the Christian understands that the diversity of human languages is a great mercy from God, as He prevented them from joining together for evil, and taught them humility. From this point stems the understanding that the veneration of the cross replaces the exaltation of the tower, to remind the human being that the remedy of the expulsion from heaven is with this cross, not anything else.

Many Church Fathers taught about the Tower of Babel, the fourth century St. Ephreim the Syriac, St. John Chrysostom, St. Gregory Nazianzen and many later fathers. In specific, St. John the Romanian [1], the New Chozebite, who reposed in 1960, speaks to us with words we understand well because he is our contemporary. The saint has a letter titled “Today’s Tower of Babel” where he says:

“After the flood, people again turned away from God’s ways; and having turned away, they again began to expect a flood. Therefore, they decided to build the Tower of Babel, that is, the Babylonian fortress. They wanted to build it up higher than the clouds, so that water would no longer be a threat to them. For this madness God confused their tongues, and they weren’t able to do any of this.

Modern people are no better than the people of those days. Today all people know that they have departed from God, and they expect punishment from heaven. But instead of choosing the ark of salvation (that is, the ark of the Church) in the right faith and repentance, instead of seeking God, people intoxicated with civilization are again building a ‘tower’ for themselves like in Babylon of old. The ‘Tower of Babel’ of our times is not a building made of stone or brick, but a mad race for inventions.

People say that the invention of cars and weapons make life easier for man and guarantee his safety, that is, protect him. But how mistaken is that opinion! After all, it is obvious that according to the measure of the world’s modernization and increase of inventions so has evil increased, and man’s life has become more bitter and fraught with dangers. People have never been so tormented with anxiety and despair as in our times, when civilization has increased… False civilization has taught people how to invent, that is, concoct the most horrifying weapons for people, and thereby it has cast out love from the world…

Thus, to speak briefly about this danger—civilization (or progress), then here is what those born of earth have to boast: Like never before it has flooded the earth with tears, horrifyingly expanded the graveyards in wars, carpeted the horizon with the exhaust from motors, and filled the sky with gigantic birds with metal beaks, ready to vaporize the world.

And in order to win time for the completion of the “Tower of Babel” (that is, scientific inventions), the brokers of fattened countries constantly call peace congresses. But God, seeing their craftiness, has confused their minds as He confused the Babylonian tongues, and they can no longer understand each other.” [2]

According to the Romanian Saint John, every invention adds floors to the Tower of Babel. In the last few decades, many floors were added. The saint rested in peace before knowing about Star Wars, cloning, robots, humanoids, genetic engineering, augmented humanity, organ donation, and digital anthropology. He passed away before the social media era, even before the Internet’s. He did not see people boasting that they had made the world a small village connected by fiber optics and covered by an aviation network that reaches everywhere.

And finally, our saint did not live to know Corona, the virus that disrupted airlines and turned back the small village to countries with closed borders. He did not read about communities forced to make a selection on who is going to die, due to lack of respiratory devices. The economies of the world are shaken, and huge and global companies are dismissing their employees. The Tower of Babel is defenseless as those who built it exchange accusations and skepticism about who produced the virus. The medical sciences which bragged for being close to produce a new human being, are standing traumatized facing a small virus, unable to find a vaccin. In the age of information, there is a huge amount of information so it is difficult to gauge and eliminate discrepancies.

The Tower of Babel is in risk because the language that humanity sought in sciences and inventions is not the language of God, but the language of reason, logic, research, methodologies, utilitarianism, and commerce. We came to a point where reason is deified, knowledge is deified, and man is deified, but the true God is cast away, forgotten or exploited. The Tower of Babel might not fall by Corona, but the world will have to reconsider its priorities, arguments and projects. It is a phase, a chapter. We are confident that in the end God will rise up and judge the earth, for all the nations belong to Him.

[1] The saint is Romanian, born in 1913, started his monastic life in the Nymts Monastery in Romania, then moved to the monastery of St. Georges Khouzibi in Palestine, where he remained until he fell asleep in the 1960’s knowing in advance the date of his departure. In 1980 his grave was opened and his body was found incorrupt. In 1992 the Roman Church added him to the list of saints. He has many poems and letters.
[2] Saint John of Neamt – Hozevit. “For those with a needy soul like me.” Iaşi: Doxologia, 2010. P. 392–393.