On the morrow, with the power and grace she had received, Mary left and crossed the river. She went to the most isolated part beyond the Jordan, to the desert, where she lived for forty-seven years, without any contact at all with either man or beast. In a region that was harsh, parched and forbidding. A place where we wouldn’t last forty-seven days. Forget that. Not even forty-seven hours! Yet this woman, a fragile vessel, totally unaccustomed to the hardships of life, lived there for forty-seven years on end, with the sun beating down mercilessly on her by day, the cold freezing her at night, and living off a diet of wild plants and roots. 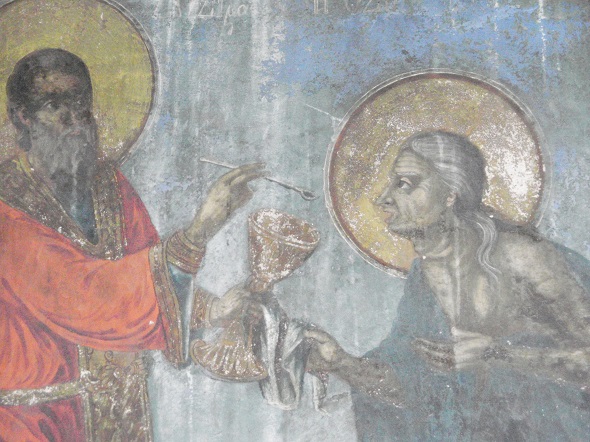 How can we well-nourished Christians of the 21st century even begin to imagine that? Yet she dared to do it. She renounced Satan and all his works, the whole life of sin, and left. She took an enormous step, the great step towards salvation:  “For you took up the Cross and followed Christ. By your actions you taught us to look beyond the flesh, for it passes, and to be concerned, rather, about the soul which is immortal”, as her dismissal hymn so felicitously puts it. She walked in the steps of Christ in the desert of fasting, prayer and the strictest ascetic life. “In patience, she awaited the Lord and through the words of His lips kept to difficult paths.”

She watered the desert with the streams of her tears and, through the sighs from the very depths of her heart, she reaped a hundredfold the rewards of her sacrificial asceticism. As the psalm puts it, her throat became rough, because she called out and shouted day and night to the Lord to forgive her sin and to grant her and the whole world His great mercy. The name of her new, now sole, legitimate, spotless, pure and most holy Lover, that is the Saviour Jesus Christ, the Crucified Love of the Church, became one with her breathing. She was an inextinguishable candle of continuous prayer of the heart. A burning flame, an unquenchable torch.

But her body also took part in her prayer, through her harsh, merciless asceticism. Saint Basil the Great said that we slay the outlook of the flesh, which is not able to submit to the law of God, in order to strengthen the outlook of the spirit, because it’s through this that we acquire life and peace. As the psalm says, her knees became weak with fasting and her heart was altered through oil. She became as shrivelled as a raisin as her flesh fell off her. She became no more than a skeleton covered with skin, grew her hair unnaturally thick and long, so that it served in a sense as a substitute for clothing, and took on an entirely different aspect, like that of a wild bird.

She became like a night-owl on the rooftops. Sober in all things, in accordance with the apostolic exhortation, she kept her mind and heart clear and lived every night and day in extreme mourning before God. But in this way she fortified the outlook of the spirit and strove courageously and boldly against the passions, which the devil attempted to kindle in the depths of her heart. Because, of course, when the hater of good, that murderous serpent of old who lurks in the fathoms, sees people fighting honourably and systematically the good fight of repentance, he doesn’t sit with them saying the komboskini on their behalf, but strives rabidly either to bring them back to their former way of life or to lead them astray with delusions and fantasies that will destroy their souls, or impel them towards despair and hopelessness, so that, one way or another, he can snatch them away as a prize to that outer fire which was actually prepared for him and for his dark and filthy angels, that is the demons.

But Mary who, by the grace of God, now belonged exclusively to Christ, crucified her flesh, as the Apostle says, together with her passions and desires. She slew, or better, with God’s unstinting assistance and grace, transformed the human passions. “Dwelling in the desert you expunged the image of the passions from your soul and wrote the most Godlike depiction in your soul, the imprint of the virtues”, as one tropario puts it.

In Mary’s spiritual struggle, a central role is played by the cleansing of the imagination. External stimuli and the practice of sin stamp evil images on the soul, impure imaginings, which pollute the world within us and make us susceptible to sin. They fox our reason, emasculate our outlook on life and debilitate our spiritual powers, so that we slide easily into sin again and again. The imagination is purified through the “retention” of the mind, which is achieved through the restriction of external stimuli (through the senses), by sobriety, study of God’s word, attentiveness, practical observance of the commandments and continuous prayer. Then, by God’s grace, the holy virtues are “imprinted” on the soul, and these are the exact opposites of the passions.

Because Christ is to be found concealed in every virtue, He then becomes the very substance of the heart and the object of our innermost contemplation and the incontestable desire of those who strive well in repentance. This is precisely what occurred with the former prodigal, Mary the Egyptian, who not only became the chastely restrained, but actually most virginal bride of Christ.