At moments like these, we feel that we should both be crying and joyous! With tears of contrition!

That the only thing proper to these spiritual individuals is contrition and being moved.

And, most likely this is the only way for us to feel. But this is also the way to meet them.

That, knowing the bodily and spiritual struggles–many times surpassing nature–struggles, but also “intoxication” and eros to come to know Christ, one becomes inept and inebriated from such a great struggle and violence for the One Beloved [Christ].

And this violence and struggle and frenzied love cannot and should not be properly described, nor neglected due to the wondrous experiences that have occurred nor the blessings and graces that have been received. That their philotimo is great and awesome, and this gives birth to the Spirit.

Their love of struggles cannot be described, and the graces that they received are also incomparable and indescribable, and surpass space and time! 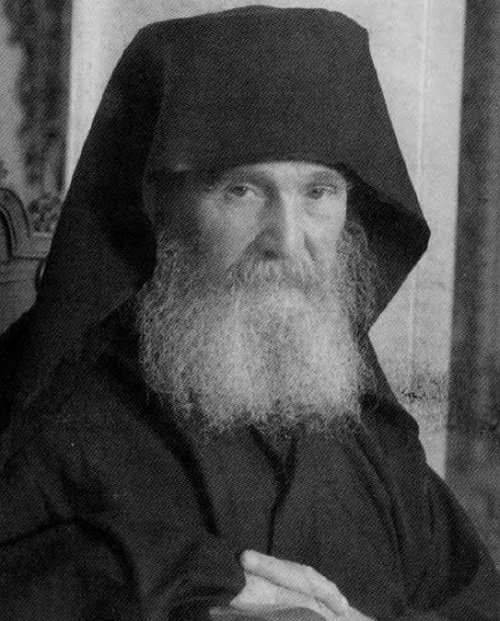 However, “where God wills, the laws of nature are overcome”!

The dormition of Elder Ephraim, the memory of the Venerable Joseph the Hesychast!

The memory of their whole venerable synodeia: Fr. Arsenios, Fr. Athanasios, Fr. Theophylaktos, Fr. Joseph of Vatopedi, Papa-Charalampos of Dionysiou, and the Venerable Ephraim of Katounakia.

One further venerable prayer rope is perfected, as befitting monastics, disciples and Elders that have most importantly been worked during the course of their lives, in caves, makeshift dwelling-places, huts and kalyves of Athos.

There they wrote with an uncreated ink of their spiritual feats in deserts, dens and Athonite crags.

They shown forth as novices, disciples, monks and Elders, with a robe shining with light, and an offering of uncreated gifts!

And thus, they themselves shine throughout the world amidst the world’s vanity!

It is worth experiencing where they lived!

Yes, they have been justified, and our life is unjustifiable!

And finally, one can see, somewhat, from within their struggle to know a little, even the smallest amount, of course, of their divine grace which they were made worthy of!

And this little empathy serves as another gift and participation in a mystery!

This gives you the ability to commune and to touch their blessed and venerable giving, which they were granted as the fruit of grace!

We are speaking of the Blessed Father Ephraim, and we are greeting his Venerable Elder Joseph, together with his synodeia. And this resembles his dormition, or to be proper, we should speak of his end as a “journey”. A journey, but where?

To Paradise, and to the bosom of his Fathers. A journey of return, as young children of Adam.

“Journeying towards eternity”, as St. Seraphim of Sarov says!

Because of this, the Venerable Joseph, with his fellow ascetic Fr. Arsenios lived a ravenous and ragged existence, seeking their corresponding necessities according to their measure. And did relent, even of the clothes they wore, but were arrayed with light as their garment and eternal raiment.

It was sufficient for them to cover their every human weakness and nakedness and to communicate everywhere the light of Christ! Him they were worthy of!

And that “the Light of Christ illumines all!”

And He fulfilled their every weakness, abandonment and pain with Himself eternally, in a manner which we could not bear or hide upon the earth.

Children of Paradise, our Elders, in the caves and sands of their blessed and ascetical toil and the Divine grace of Athos! There where are our taxi cabs towards eternity and the return to their homes, did not meet the terrible “Nobody”, but an Elder of the same nature as ourselves, a citizen of the radiant dwellings a Paradise. In other words, a leader partly of earth and partly in heaven!

A sure guide and teacher and intercessor, but also an unmercenary standing as an intercessor for the sick homes and dwelling-places of their homelands and country. A taxi cab of return which for them was the unending personal and communal journey.

And behold, suddenly we are together for the first time after 60 years and four months. Since the repose of the Venerable Joseph the Hesychast on August 15/28th, 1959.

Let us remember the impatience of the Venerable one when he appeared to his fellow ascetic Fr. Arsenios and asked him: “For how long will we live apart?”

And the simple Elder Arsenios responded: “Do you think it’s in my hands?”

The synodeia is complete. A venerable synodeia, full and wholly shining.

And the beloved Johnny, Fr. Ephraim of Philotheou and Arizona, the newest of the synodeia of the remaining beloved ones, having received the message of the canonization of his Venerable Elder, hastens to travel to him!

He came to know this of course, how the heavens are rejoicing together, they are spiritually fragrant and rejoicing!

As were the caves of Athos where Joseph the Hesychast lived through asceticism his blessed hesychia, he has made the Heavens like these.

In the mean time, he did not neglect to honor his children, and to open the door of Divine mercy for them and to make them extraordinary communicants of Divine experiences…

Elder Ephraim has reposed in the Lord.

And our mind goes to the reception of 19-year old Johnny by the Venerable Joseph the Hesychast on Athos. The last little lamb of his fold, who however, would later play a leading role throughout the territory of the Garden of the Most-Holy Theotokos. This, the Venerable Joseph saw, as he said: “from these little huts will come Abbots”.

And his words were not idle talk, but were a work of divine illumination.

And this John from Volos, Johnny, the monk and Hieromonk, Father Ephraim would gather around him by his feet a multitude of monks, as the Elder of a cell at first, which became a larger cell, and then an Abbot–through the mouth of the Venerable One, of the Monastery of Philotheou, the lover of God.

And he did not neglect, as a new Abraham, to sacrifice of his flock–and not only optionally–and showed forth new Abbots, new Elders and Athonite monasteries! Repopulating the Monasteries of Karakallou, Konstamonitou and Xeropotamou.

And these monasteries were not captured stubbornly, but were inhabited by request in order to renew them and show forth their ancient beauty, and to make them spiritual workshops. The center of their art and way of life, and of the cenobia in general, was the ascesis of noetic prayer.

The small and single-phrased prayer: “Lord Jesus Christ have mercy on me.”

Thus, this small and simultaneously incomparable workshop of noetic prayer which was founded with the personal struggle and pain by the Elder, and the Venerable Joseph the Hesychast, will bear fruit! They will transform these into large gardens of the Holy Mountain and of the Orthodox Church. And these little huts became monasteries, and were transformed into cenobia from being idiorhythmic!

And what will we say of this “Johnny”, Hieromonk Father Ephraim, the Elder of Abbots and Elders of Athos, but beyond this, a new Apostolic Mission seems like it was totally unforeseen (We do not know if the Venerable Joseph the Hesychast foresaw this. It is a worthy question!)

Perhaps, however, it was not some mission but more so a state and grace-filled essence? Otherwise, how could he have become a fisher of men, in other words, an Apostle, if his presence were not one Apostolic, Missionary!

Thus, when he found himself in America, he would fish for men there, not only from Orthodox peoples, but from unchurched, hungry and thirsty people–if not starving and desperate spiritually–people from other nations. That they might be one flock and one shepherd, in the larger and greatest flock with One Shepherd [Christ], “that they might be one!”

We remember, however, that his children on Athos began to feel like orphans as Elder Ephraim was gone for long stretches of time in the USA and Canada. They could not be consoled, not even when St. Paisios the Athonite praised the work of their Elder in America! And even the number alone, of 19 monasteries (17 in the USA and 2 in Canada) serves as a spiritual feat!

But also the Venerable Porphyrios allegedly expressed favor for the Blessed Elder in America, and his potential to attract Americans to the Orthodox Church.

A peaceful, spiritual conqueror of America, and even a Christ-bearer, a new Christopher* Columbus, Elder Ephraim of Arizona. Thus he began the “annexation” of America to Orthodoxy. And yes, once again the Hellenism of the mighty Romiosine will once again conquer its conquerors! At a time when American civilization has conquered the world. Even our land [Greece]. But this vacuousness does not give rest, does not console, does not embrace…

It covers the inner emptiness of men by placing garbage below the rug, if not showing trying to show the garbage as treasure!

How beautiful is the video that I had seen before, which showed Elder Ephraim loading food to hasten to feed the poor, homeless and drenched people, to offer to them from the overflowing of his heart.

And behold, once again, the unity of Hesychasm with action. Our Elders and Hesychasts have a burning heart for all of creation, and thus find the way to benefit and multiply for their fellow men even material gifts, not just those spiritual!

And the little Johnny from Volos, the Athonite Elder, Hieromonk Father Ephraim of Arizona and all America, and the former Abbot of the Monastery of Philotheou, he appears to spread out and unfolded Orthodox spirituality in the epicenter of the modern world in the USA. And thus, the Athonite huts have “conquered” the world, offering indelibly the Light of Christ, Who shines upon all!

May we have his blessing!

*Note: The name “Christopher” is translated as “Christ-bearer”.