Homily for Sts. Cyril and Methodius, illuminators of the Slavs

Wonderful is the missionary work of Sts. Cyril and Methodius, who are commemorated together on May 11th.  Their mission was spread over a vast area of central Europe, which consists of what is now the Czech Republic, Slovakia, Slovenia, Croatia, Bosnia, Montenegro, and Ukraine.  Their reach even extended to parts of Austria, Hungary and into Russia.  Whole nations abandoned paganism and superstition, in favor of Christian civilization.  They worked as equals, determined to plant the Christian faith as Apostles to the Slavic peoples.

The saints were brothers, born in Thessaloniki to an aristocratic family.  Cyril was born in 827 AD, with his older brother Methodius born in 815 AD. They attended the most renowned schools in Constantinople, where they excelled.  Constantine (St. Cyril’s name before becoming a monk) earned the name of “philosopher” for his intellect.  He spoke eight languages, including Slavic, which is why St. Photios appointed him Director of the Center for Slavic Studies, which he had founded in Constantinople.  His brother Methodius had been appointed Governor of Slavonia (a province in the Balkans with a Slavic population), so he too was able to learn their language.  Yearning for the solitary life, he resigned his position and became a monk in a Monastery of Olympus, in Bithynia.   Through unceasing prayer, study, and asceticism, St. Methodius would be equipped for the great work that God would call him to later. 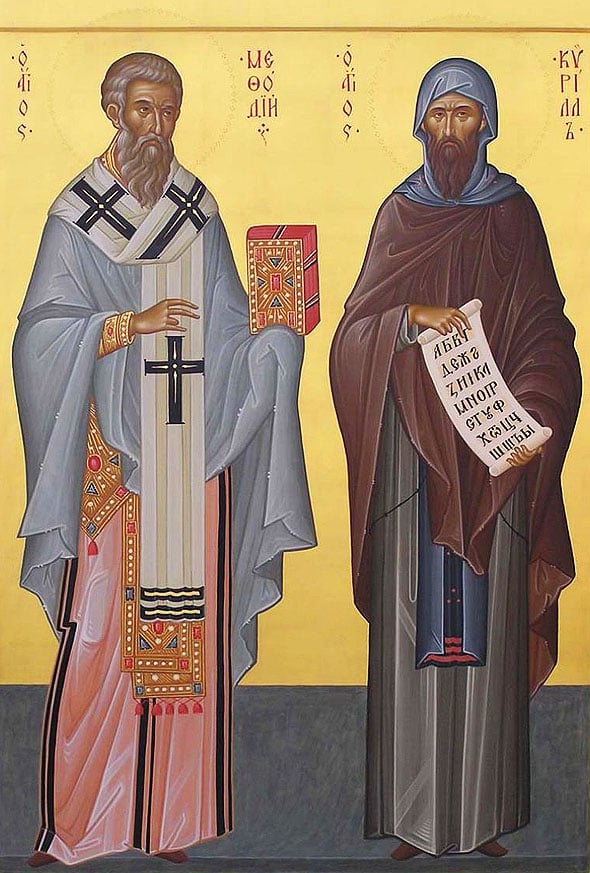 It was the Ecumenical Patriarch St. Photios who fully appreciated St. Cyril’s qualifications, assigning him to various ecclesiastical missions, which he successfully completed.   In one of these, he was sent to Chersonas, where he baptized the first 200 Slavs, among them members of the upper class.  This created the conditions for the continued growth of the Church there, which after a century spread throughout Russia.   While in Chersonas, St. Cyril realized that the greatest obstacle to his missionary work was the lack of writing, due to the Slavs having no alphabet.  This is why, when the Patriarch commissioned him to go to Moravia with his brother St. Methodius to preach the Gospel, he created the Slavonic alphabet.  It was this alphabet which he then used to translate and record the four Gospels, the Acts of the Apostles, the Epistles, the basic Holy Services and the Divine Liturgy.  Upon arriving in Moravia with his brother and associates in 863, they were happy to offer the Holy Gospel translated into Slavonic as a gift to the Ruler of Moravia.  He gladly received this gift, as his request to Emperor Michael III was now fulfilled.

The two missionary brothers, who have been described as Isapostles (Equals to the Apostles), then began work on the establishment of a school in which they taught the Slavic alphabet and grammar, using the Bible as the basic text.  They trained their Slavic associates, ordaining the most suitable to the priesthood, and expanded the Church throughout the territory.  Naturally, this was not without difficulty due to a variety of factors, particularly from the successor to the Moldavan ruler Rotislav.  Sts. Cyril and Methodius went to Rome in 869, where they were welcomed by the Pope.  It was during this visit that St. Cyril reposed, and was buried there.   St. Methodius, now Archbishop of Sirmium, continued his work and ordained a multitude of Slovenians, Croats, and Serbs to spread the Gospel in other countries where the Slavic peoples were established.  Enduring persecution and imprisonment for two years, he died in 885.

It is impossible within the limits of a single sermon to describe all of the great pioneering work accomplished by these holy brothers.  What can be said is that the apostolic and cultural work of Sts. Cyril and Methodius was of immeasurable benefit for the people they ministered to.

When we consider all that they did, we see how the Saints willingly took on the holy work entrusted to them by God through His Church.  They were totally committed, despite the difficulties, persecutions and reactions they received from others.   After his imprisonment and the death of his brother, St. Methodius did not even consider leaving and going back to his Monastery.   They were determined to follow God’s exhortation to the Church of Smyrna: “Be faithful unto death, and I will give you the crown of life” (Revelation 2:10).

This is a great lesson for all of us.   Whatever mission God has given us in our lives, we must persevere to the end, no matter what obstacles or temptations we may face.  We cannot give up when we encounter the first challenge. A student has to complete their studies.  Spouses should be loyal, and devoted to each other their whole lives.  Whether the work is for the Church, a public work, or something to do with our profession, we are bound to complete it.  But most of all, our spiritual training as Christians, a labor that continues even if we are not able to see the amazing results we may want.  We do this, so that we can also say to God: “Father … I have finished the work which You have given me to do” (John 17:4).   With this we can be at peace, knowing in our hearts that we have struggled and overcome all things, continuing our journey to Christ to the very end.