Jesus Christ: the Son and Word of God (Sunday of the Holy Fathers)

The Sunday of the Holy Fathers, which our Church celebrates during the period of Pentecost, is dedicated to the memory of the Holy and God-Bearing Fathers of the 1st Ecumenical Synod in Nicea, at which Athanasios the Great and Saint Spyridon the Wonder-Worker were present and testified as to the true faith.

The Synod, acting in the Holy Spirit, expressed the traditional faith of the Church and formulated its dogmatic teaching on the second Person of the Holy Trinity, that is, Jesus Christ the Son and Word of God, Who was both God and human. The importance of the 1st Ecumenical Synod lies in the fact that it protected the faith from the heretical teaching of Arius and his supporters, who taught that Christ was a human being, but not God. This is the greatest heresy of all, throughout the centuries. Because, as the Fathers made clear, if Christ is created, i.e. a human person, how could He save us? 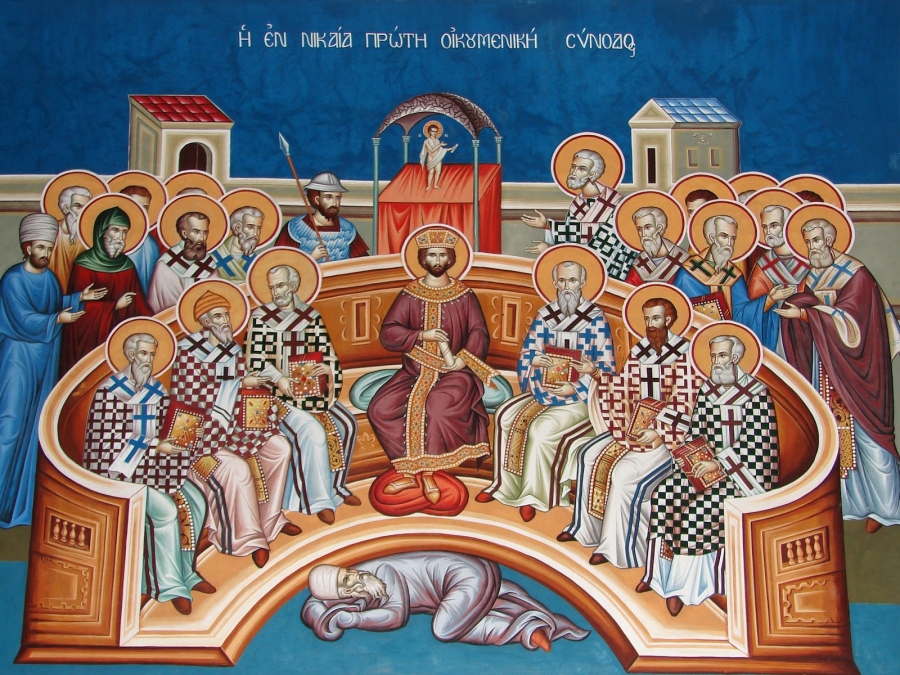 According to the teaching of the Orthodox Church, the name of Jesus Christ manifests the whole of the Holy Trinity. ‘An address to Christ is a confession of all. For it denotes God, Who anoints, the Son Who is anointed and the means of anointing [‘the Chrism’] (Saint Basil the Great). The God of Abraham, Isaac and Jacob was revealed to us in the Person of Christ through His incarnation. The Incarnate Word of God, then, the historical Jesus, Who was human and God, is precisely the essence of the Revelation of God, the essence of the faith.

Christ and the Church
In the Orthodox faith, however, and in the experience of the Church, Christ is inseparable from the Church, which is His body. By the same token, the Church is inseparable from Christ, Who is its head and origin, its life and ethos. Those who would separate Christ from the Church or the Church from Christ make the gravest mistake and fall into the most serious delusion and heresy: they decarnate and denude Christ, the ‘Incarnate God the Word’, and expel Him from His body. But this also means that they expel Him from us and from the world.

In the Person of Christ, as God and human being, the greatest battle was fought, as a result of which the power of sin, the curse of the law, the ineluctable fate of mortals and the dominion of death were completely routed. Those who are baptized in the name of the Holy Trinity, are clothed in the Lord and enter His body, the Church, make this victory their own, through the Grace of the Spirit.

Our Orthodox identity
The holy Fathers pass on to us the message of a new effort towards internal and external freedom, towards experiencing our identity. What we need is to allow ourselves to be caught up in the flame of their burning inspiration. Because they knew very well that the greatest enemy of any people is the loss of its sense of self, the degeneration of its cultural individuality and the distortion of its mores.

The most fundamental prevarication we engage in as regards ourselves and the problems we face is to think that the substance lies in the content of our demands rather than in our ethos. It is only through the preservation and retention of our identity and self-awareness that we can be witnesses to our faith and our culture. Witnesses to ourselves and worthy of holding in our hands our heirlooms and tradition, which have been guarded in the hearts of generation after generation.

To put it another way, we have to be centered on the Church, to grow in it and to experience the sacramental tradition which contains the whole of the revelations and visions, the foretaste of the life to come and of bliss.