When he (Elder Iosif Vatopaidinos) was encouraging us once to study Patristic writings, he mentioned that there was benefit not only in their teaching and exhortations, but also from their prayers. As well as studying their works, we should call upon them.

In his hermitage at New Skete, on the Holy Mountain, while he was studying the works of Saint Symeon the New Theologian and, at the same time, praying to him the presence of the saint became so tangible that he felt diffident and reticent. 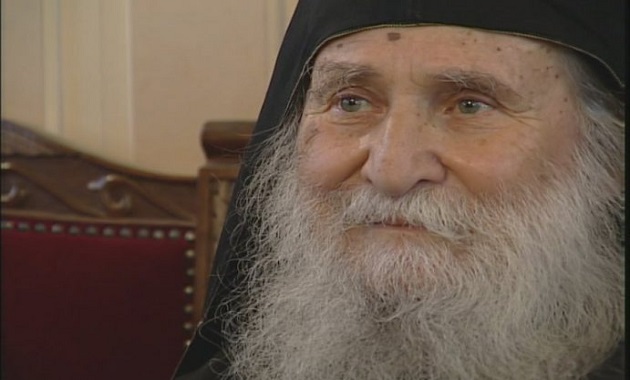 He studied the Holy Fathers carefully, systematically and in depth and he always read the original not a modern translation. Writings well beyond the ability of many people to understand [because of the difficult language], such as those by Saints Gregory Palamas and Maximos the Confessor were not only easy for him, but also his principle spiritual nourishment, even though he had only rudimentary education*.

He had a living relationship with the Fathers whose texts he studied. He told me that on one occasion he couldn’t understand a particularly difficult passage by Maximos the Confessor and the saint himself appeared and explained it to him.

Often divine Grace helped him with particular questions or unknown words he came across in his reading.

Another time, we were discussing something and a word came up from one of the iambic canons of Saint John the Damascan and he told me that at that precise moment Grace told him what it meant. He passed on the definition to me and then we opened a dictionary to confirm the meaning. It was exactly as the Elder had said.

* There has always been a tradition of scholarly monks on the Holy Mountain, but a concatenation of adverse circumstances in the 20th century meant that quite a number of monks arrived without much in the way of formal education. Saints Silouan, Joseph the Hesychast, Porfyrios, Païsios and the late Elder Efraim in Arizona were not men of letters, although Saint Païsios, in particular had a way with words. Yet all of them were able to read and understand Patristic texts. Saint Silouan actually addresses this in one of his letters: ‘People who don’t understand the Scriptures find them almost unintelligible. It’s only when they’re taught by the Holy Spirit that they comprehend everything’. Patristic writing is further complicated by the fact that not only are the concepts difficult, but the Greek can be impenetrable. The Cappadocian Fathers deliberately used an old form of Attic Greek, not to show off their erudition, but because they felt it better suited to their efforts to express the almost inexpressible. Thus, for example, they took the older concept of ‘hypostasis’  (‘underlying reality’) and refined it so that it meant ‘mode of being’. It is therefore truly astonishing that men with the educational background of those mentioned above were able to read and understand texts by Saints Gregory Palamas, Maximos the Confessor and the other Fathers in the original.