‘When I was illustrating the book I felt awe, as if I were holding holy relics’

An interview with Stelios Koukos

After his work on the graphic novel ‘Visit to the Loft’, about the childhood of Saint Nektarios, the multi-talented artist Christos Gousidis has now turned his attention to a childhood event in the life of another saint, Saint Porfyrios Kavsokalyvitis.

The book is called Τρίτο Ταξίδι, Αλήτης για την αγάπη του Χριστού [The Third Journey. A Drifter for the Love of Christ], published by En Plo, and it describes the  frantic efforts of young Evangelos Baïraktaris (Saint Porfyrios) to reach the ‘Bower of the Mother of God’ and live the life of the ascetics. 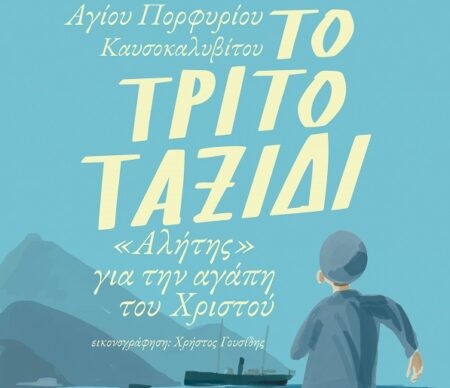 The cover of the book ‘The Third Journey. A Drifter for Christ’s Love (detail)

In essence, Gousidis’ task was to illustrate the original narrative as told in the book Γέροντος Πορφυρίου, Βίος και Λόγοι [Saint Porfyrios’ Life and Discourses], published by the Holy Monastery of Chrysopigi, Hania.  The English version, Elder Porphyrios, Voyage to Mount Athos. A drifter for Christ’s love, is available as an e-book on Amazon.

There was a point in common between the two saints Nektarios and Porfyrios in the books you’ve worked on in that the former was the latter’s spiritual father. Did you notice any other points in common while working on the books?

I have a personal experience from my childhood. I was just little and my parents had taken me to venerate the relics of Saint Nektarios on Aegina. When we arrived at the Saint’s monastery, I was overcome with a taste of paradise which I’d describe now as a sense of joy, peace and completeness. On the way back home from Piraeus [the port from which the ferry to Aegina leaves] we took a taxi. As we were going up Piraeus Street- it was a weekday and there was a lot of traffic- we got as far as Omonia Square and were stopped by a traffic light.

While we were waiting, my gaze fixed on a particular building. It’s an image that I can still see as clearly as if it had happened yesterday. The lights turned green and we set off again, but I kept staring there until we were past it. Throughout those long seconds I again had this heavenly feeling, the same as I’d had in the monastery on Aegina. It was a sense of serenity which was undisturbed by the commotion of Omonia. Many years later I learned that the building was the Clinic. And when we went past it that day Saint Porfyrios was serving his last year as the hospital priest.

So, in a manner of speaking I’m also involved with both of them, travelling back to my innocent childhood. I feel like one of their younger brothers, who’s proud of them and wants to tell people about them. Who wants to tell people that they were once little children as well, but left their families and travelled for the love of Christ. They entrusted themselves to  strangers and foreigners and surrendered humbly to God’s providence, allowing Him to guide their steps. 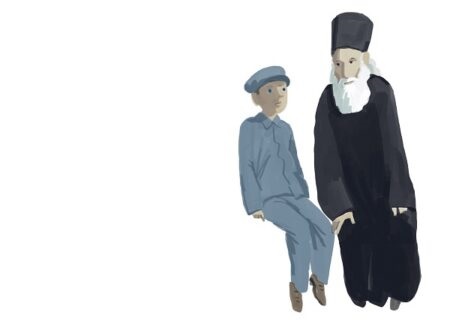 Elder Panteleimon with little Angelos on the boat

Young Evangelos Baïraktaris had heard some people talking about the Holy Mountain in the grocery store/tavern where he worked and was enchanted. It’s as if he decided there and then to put an end to his childhood- his real age- and to seek to live not only older than his age but in the beyond. What was it about this story that charmed you?

All children have a strong desire to grow up, because they admire the world of adults. Little Angelos as he was known, wasn’t interested just in wearing long trousers, however- little boys wore short trousers then, summer and winter- nor in acquiring the behavior of a grown-up. On the contrary, he longed for Christ and in turn this drew the Lord’s attention to him. Indirectly, this reminds me of the Mother of God. In the way He selected her and she became what we call the ‘chosen vessel’, in order to bring Him into the world.

There are some people in history whom we admire for the unalloyed desire in their soul for our precious Lord. And I wonder: does Divine Grace pick then out and set them apart, or does God perhaps send them into the world to help the rest of us?

But young Angelos had to make three attempts to achieve his goal of getting to the Holy Mountain. He showed he was ready, however, by not becoming upset when he was called a drifter, when he sang hymns on the boat that fitted well with the personal turmoil in his life. Were you in some sort of awe in your whole encounter with the child/elder? How did you approach him in order to capture him in your work?

In the last years of the saint’s life I was living in Athens, as a student, and now I regret that I hadn’t heard of him, or else I’d have gone to meet him. When I read his book Life and Discourses, and talking to friends of mine who’d read it, we agreed it was best book in our lives.

While I was working on the book illustrations I did, indeed, feel a sense of awe, as if I were holding holy relics, as if I were decorating a reliquary. I think I approached him with my innermost self, deep down within my very soul where we all encounter our personal truth and God. At the same time I talked to the saint about ordinary, everyday things, such as finding a parking space.