On June 20th, the Church honors the memory of St. Methodios, Bishop of Patara in Lycia, also known as the birthplace of St. Nicholas of Myra.  St. Methodios rose to prominence before St. Nicholas, during the last great persecution of Christians by the Roman emperors.   He was given rare spiritual and intellectual gifts by God, possessing great knowledge of philosophy and theology.  It is with these gifts that he defended Orthodox doctrine, giving strength to Christians.   The foundation for this was set in his childhood, where he faithfully participated in the divine worship of the Church.  This living faith, combined with his eloquence, made him one of the most important theological and ecclesial figures in the early Church.

When St. Methodios was elected Bishop of Patara, he zealously undertook the care of the souls entrusted to him by our Lord Jesus Christ, Who is the Highest Bishop.   With his inspired sermons and holy life, he gave everything to the education and spiritual nourishment of his flock.   This was not just limited to his own Diocese and region, and he went wherever he was needed to defend the faith from detractors or heretics.  This preaching mission in defense of Orthodoxy appears to have even reached Side of Pamphylia.  Word of his activities reached the Roman authorities, who at the end of the 3rd century were still persecuting Christians.   For them, the Bishop of Patara was an enemy of Rome, and so they ordered his execution.   The details of St. Methodios’ Martyrdom have not survived, only to say that he was beheaded, having kept the faith to the end.   By giving up his sanctified soul to the Lord in this way, his vestments were made a royal purple with martyr’s blood.   This was said to have taken place around the year 310 AD. 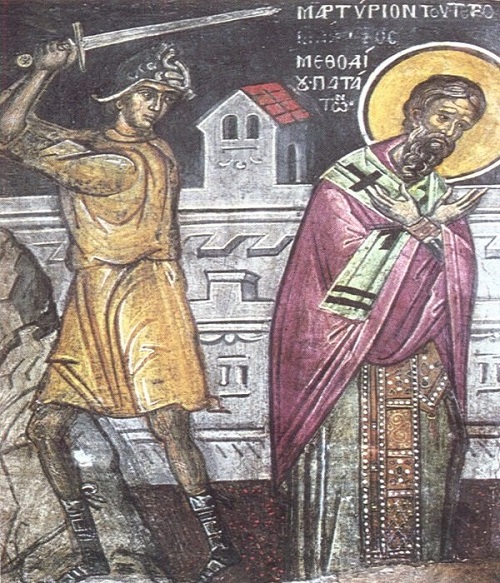 From the many beneficial teachings of St. Methodios, we can choose two that are of interest to us even today. First, the value of purity and virginity, which is so easily dismissed in modern times.  He explores this theme in one of his surviving works, in the form of a dialogue modeled on Plato’s Symposium, and it is called The Symposium (Banquet) of the Ten Virgins.  It is through the mouths of ten virgins, who each speak in turn that provide the literary device for St. Methodios to preach on the heavenly virtue of virginity (“Parthenia/Parthenos” in Greek).   It is a great gift, which can lead to incorruptibility and likeness to the “original Virgin,” Who is Christ.  The Saint also makes the point that purity is not just about sexual restraint, but the avoidance of all evil.   It is a mockery to renounce physical sexuality while not keeping the mouth, eyes, ears, hands, or heart pure, or to let arrogance and anger take hold.   He has great praise for virginity, but he also declares that Holy Marriage can be a means to reach perfection.  He likens virginity to honey, but is quick to point out that although honey is sweeter and more pleasant than other things, that does not mean that everything else is bitter.   Purity in a Christian couple’s relationship ensures their mutual love, unity, and lifelong union.

The other issue which has preoccupied not only theologians, but also philosophers (from Plato to the present day) is the origin of evil.  It is the source of much suffering in the world, but St. Methodios reminds us that God Almighty did not create evil.   What God created was all good, as it says in the Scriptures: “Then God saw everything He had made, and indeed, it was very good” (Genesis 1:31).   Evil came into the world by the manipulations of Lucifer himself, who was originally created by God as a good angel, like all the others.   Sadly, he turned away from God, bringing with him all the angels who belonged to his order.   This resulted in their becoming evil spirits, placing themselves in opposition to God and all His works.  Envious of Adam and Eve, Satan entered Paradise and through his cunning, tempted them to reject God as well.   They chose to do so, and the consequence of this action was that evil spread not only to the human race, but to the whole world.  St. Paul the Apostle writes on the fruit of this evil, that came from the Fall of Adam and Eve: “We know that the whole creation groans and labors with birth pangs together until now” (Romans 8:22).

My brothers and sisters, let us reflect on the blessing that purity is for us, both physical and mental.   We have a great responsibility to use the gifts that God has given, because He made us free, and we have the choice to do what we want.   That also means that we are responsible for the consequences of our decisions.  When we decide to faithfully embrace Christ, choosing the good, it is a certainty that we will have joy, both here and in eternity.   May the Lord, with the intercessions of the Holy Hieromartyr St. Methodios, always guide us in our decisions and actions, so that we make the right choices.  Amen.