New Martyrs, the Fragrant Blossoms of the Winter of Slavery

Today, the third Sunday of Matthew, the Church honors an important choir of saints: the New Martyrs, that is those who were martyred after the Fall of Constantinople.

The Assembly [i.e. the Feast] for the New Martyrs is of great significance for the faith of Christians. To understand this, one needs only to consider the times during which they were martyred. These were oppressive, dark years when a whole nation was enslaved and subjugated. With countless sorrows for Christians and unbearable repression against them. Mockery, humiliation, ignorance, crushing taxation, a whole world unable to catch its breath amid the wretchedness of everyday life. 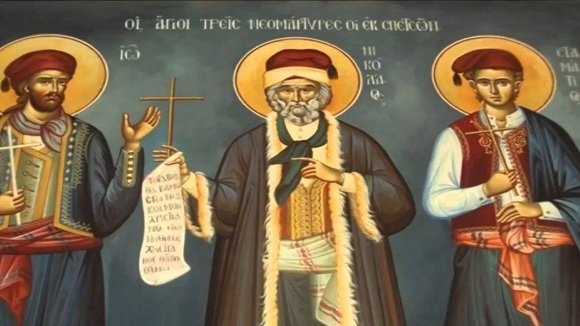 At the same time, conversion to the ranks of the religion of the overlords presented an opportunity which was there for the ‘flock of animals’ [as the enslaved population was known] at any moment. With a simple declaration, they could pass from poverty to riches.

The issue of religious differences cast a deep shadow over those living in the realm of the Ottoman Empire. Essentially, it was these which distinguished the various groups of inhabitants. We see this clearly in the cases of those New Martyrs who in a moment of weakness or carelessness (for example through inebriation) embraced Islam and later repented, of course, and declared their faith in the religion of their fathers, for which they were martyred. The infidel conquerors were completely unable, for any reason at all, to accept the return of the penitents to the teaching of Jesus. The ultimate penalty was the only one that could be countenanced.

The New Martyrs recalled in more modern times what had been declared by the martyrs of the ancient Church: human dignity and the right of personal choice are non-negotiable and are above any temporary enjoyment. They stood tall in the face of an immense empire, taking no heed of the value of their own life, and taught their contemporaries and those who followed them. By their stance, they confirmed that the truth is not a matter of weight of numbers nor of state power. Alone in the world against their persecutors, they were impatient to meet their ‘Crucified Love’. They were compared, most aptly, by Saint Nikodimos the Athonite, to flowers that bloom in the midst of winter.

In conclusion, it’s worth reminding our Greek-speaking readers of the Supplement in Pemptousia on the subject of the glorious order of New Martyrs (https://www.pemptousia.gr/category/πεμπτουσία/αφιερώματα/νεομάρτυρες/), where they can read inspiring cases of simple, ordinary people who, at the most crucial time of their life and in the face of terrible and most tempting allurements, did not hesitate to confess their total dedication to Christ.