At a time of deep divisions in societies in many parts of the world, we would do well to recall the attitude of an elderly Greek priest in the wake of the dreadful massacre at Distomo in June 1944. The following extract is taken from the book Min Odysse (My Odyssey), by the then Head of the International Red Cross in Greece, the Swede Sture Linner.

We [Linner and his wife Cleo ] were married on June 14. Emil Santrom, chair of the Greek Committee, organized a wedding banquet for the occasion. Late in the evening he approached me and pulled me aside to a corner, away from the laughter and voices, to talk privately.

He showed me a telegram he had just received: for three days, the Germans had been slaughtering the people of Distomo, near Delphi, and then they burned the village down. If there were any survivors, they would be in need of immediate assistance. 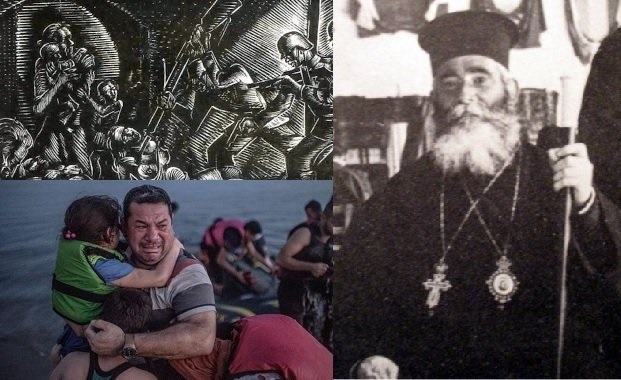 Distomo was within the region of my responsibility for the supply of food and medicines. I passed on the telegram to Cleo to read. She closed her eyes and we immediately departed discretely from the festivity.

About an hour later we were on our way in the darkness of the night. It took several agonizing hours to travel the ravaged roads and pass several roadblocks. It was dawn by the time we finally reached the main road that led to Distomo.

Vultures were rising slowly and hesitantly at a low height from the sides of the road when they heard us coming. For hundreds of yards along the road, human bodies were hanging from every tree, pierced with bayonets – some were still alive.

They were the villagers, who were punished this way – they were suspected of providing help to the guerillas of the region, who had ambushed an SS unit.

The odor was unbearable.

In the village the last remnants of the houses were still burning. Hundreds of dead bodies of people of all ages, from elderly to newborns, were strewn around on the dirt. Several women were slaughtered with bayonets, their wombs torn apart and their breasts severed; others were lying strangled with their own intestines wrapped around their necks. It seemed as if no-one had survived…

There! An old man at the end of the village! He had miraculously survived the slaughter. He was shocked by the horror around him, with an empty gaze, his utterances incomprehensible. We descended in the midst of the disaster and yelled in Greek: “Red Cross! Red Cross! We came to help!”

From the distance a woman approached with hesitation. She told us that only a handful of villagers managed to escape before the attack begun. Together with her we started searching for them. It was after we had set off in this search that we realized she’d been shot in the hand. We operated on her immediately with Cleo performing the surgery.

It was our honeymoon!

Not long after this horrific massacre, our connection with Distomo would conclude with this remarkable epilogue.

When the German occupation forces were forced to leave Greece [after the defeat of Nazi Germany], things did not go as planned for them. A German unit was surrounded by guerillas exactly in the same area, at Distomo. I thought that this might be taken by the Greeks as an opportunity for bloody revenge, especially when considering that for quite a while the region had been cut off from any food supplies. I loaded a few lorries with food necessities, I wired word of our planned arrival to Distomo, and we found ourselves on the same road, once again, Cleo and I.

When we reached the outskirts of the village, we were met by a committee led by the elderly priest. He was an old fashioned patriarch, with a long, wavy, white beard. Next to him the guerilla captain, fully armed. The priest spoke first and thanked us on behalf of everybody for the food supplies. Then he added: “We are all starving here, both us and the German prisoners. Now, though we are famished, we are at least in our land. The Germans have not just lost the war; they are also far from their country. Give them the food you have with you, they have a long way ahead.”

At this phrase Cleo turned her eyes to me. I suspected what she wanted to tell me with that look, but I could not see clearly any more. I was just standing there weeping….