We Put Fantasies in the Place of God

Fr. Nikolaos is the Chair of the Department of Theology and Pastoral Studies and a Professor of Dogmatics and Philosophy at the University Ecclesiastical Academy of Thessaloniki, a Visiting Professor at the Institute for Orthodox Christian Studies in Cambridge, and an Honorary Research Fellow at the University of Winchester.

The real problem of our times isn’t atheism, but polytheism. Indeed, in the sense of idolatry. The danger is present because we put the clamorous monstrosities of our fantasies in the place of Christ, our loving, sacrificed and humble God. 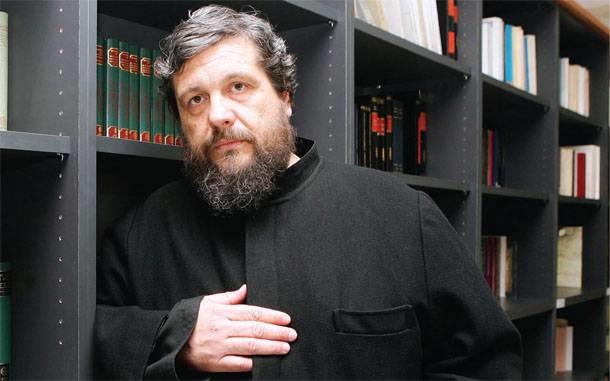 How do people today experience Easter?

Apart from the emotional and festal embellishments, those days bring a startling existential revelation: that God descends into the condition of my chaos and absurdity, loving me at the expense of being crucified by me. God cares for me and that costs Him. When everyone wants to impose themselves on me, He exercises His freedom for a relationship with me, not as will for power [Nietzsche] but as love. He’s sacrificed, humbled and loses most – for me. Christ is crucified because that’s the only way to really love real, broken people. The Resurrection is the final, personal triumph of the painful inclusion [‘interpenetration’] of all people: Jews, Romans, Greeks as well, of course, as His terrified and confused disciples. Death and evil are simultaneously defeated through the loving embrace of Golgotha: ‘You stretched out your hands and unified what had once been separate’ [Ode 3, Mattins, Great Saturday].

What would you say to a fellow human being who, in these times, is experiencing his or her own Golgotha (homelessness, unemployment, sickness)?

We’re all crucified on the Golgotha of history. We should make our personal cross a quest for the Cross of Christ. Christ’s Cross is the only one which isn’t tragic, because it’s the Resurrection Cross of self-offering to God and others. Epictetus said that people are frightened not by pain but by the absence of meaning. Let disasters become a profound quest for God, because He’s the real object of our desire, rather than our myriad demands. He is the deep meaning Who rectifies all deficiencies.

A few days ago, Fr. Filotheos Faros said that most of the clergy are missing in action as regards pastoral care and that they have not supported those in need. Do you agree?

If we continually highlight wickedness, this produces insecurity, violence and hostility, as well as conflicting tendencies towards self-promotion. I myself have encountered a long line of holy clerics and monks who managed to make a theologian and priest out of a student of Freud and Heidegger, one who had nothing to do with the Church. I feel dramatically inadequate compared to them.

You said once: ‘We shouldn’t lose the passions; we should transform them’. What did you mean by that?

Fortunately, Christianity is neither Platonism nor Stoicism. Everything in our body and soul is created by God, and as such, absolutely sacred. It is up to my own freedom to get angry, fall in love, play, create, eat, rejoice, be sorrowful, in such a manner that will bring me continuously closer to the Divine Source of my being: this is the meaning of the Incarnation. God does not call me to escape from this world, but to transform it into a place of His manifestation.

Resurrection: the feast of feasts and festival of festivals?

Christianity is the profound enemy of any form of idealism, since it is, itself, nothing other than sacred materialism. The Incarnation is nothing other than the elevation of matter and history when these are offered to God and to other people. Matter (and, according to the Fathers, even our soul is of a delicate material texture!), history and, in the end, the existential community in God (as the Body of Christ, in more theological terms) all combine to constitute the existential and ontological fact of the Church.

Does it bother you that ‘shepherds’ become involved with secular extremes and comforts?

Well, Judas was one of Christ’s disciples. Personally, I’m much more bothered when, in the place of the above view of the Church, people introduce a completely nonsensical concept of it as a secular Institution, which is supposed either to lead the nation or fusses neurotically over policing other people’s morals. That’s a Church with no strategy for life.