Liberation from the Power of Evil

The central aim of the Gospel reading for the fifth Sunday of Matthew is to demonstrate Christ’s Messianic power. Through Jesus’ activity in the world, His crucifixion, resurrection then the foundation of the Church, the destructive work of the demons is abolished, people are liberated from their domination and a new era begins for humanity.

Indicators of this new era are the cures of the possessed, that is of people suffering from some psychological ailment due to the influence of a demon. 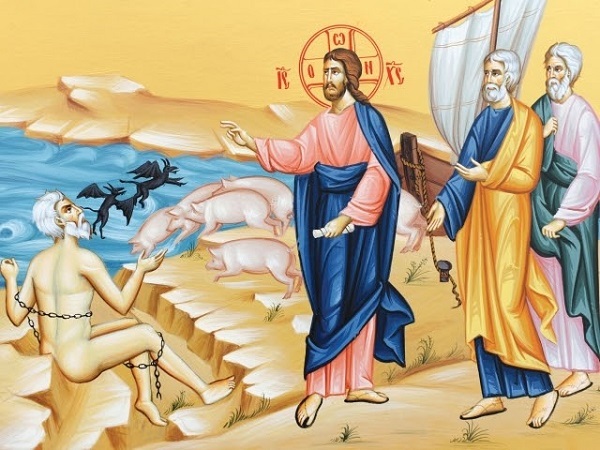 If we describe the two unfortunates in today’s narrative in modern terms, and assisted by the parallel narratives of the same event by the other evangelists -who speak of the healing of only one demoniac (Mark 5, 1-20 and Luke 3, 26-29)- we might make the following points about their characteristics:

a) They were social outcasts, since they dwelt among the tombs and were considered dangerous (‘very fierce’).
b) they were madly aggressive (‘so that no-one could pass that way’)
c) they had a fractured inner personality (‘my name is legion for there are many of us’)
d) they had a tendency towards inflicting self-harm (‘cutting himself with stones’ [Mark 5, 5])

This image of people subject to the power of Satan is truly wretched. Because the presence of the latter means the loss and destruction of everything, from the human person to the animals. No sooner had the demons entered the swine, according to our narrative, than they wreaked havoc, demonstrating once again that Satan causes devastation wherever he goes.

Although we would not, today, share the views of the New Testament era regarding human illness as being due to the influence of demons, our own time presents such a variety of instances of the prevalence of the demonic factor in the lives of individuals and societies, that its clamorous presence and destructive activity can hardly be doubted. And should anyone be inclined to doubt, let them remember the verse by Baudelaire that ‘the finest trick of the devil is to convince you that he doesn’t exist’ [La plus belle des ruses du diable est de vous persuader qu’il n’existe pas]. Of course, if you look for Satan in the anthropomorphic, or rather, monstrous depictions of him in previous ages, you won’t find him and will be deceived into thinking he doesn’t exist, whereas, in reality, evil has so many devastating manifestations and disastrous consequences in our life that ignoring it is a permanent trap, especially for the most naïve and unaware of people.

The presence of Christ in the world through the sacraments of the Church and the preaching of the Gospel signifies the victory of goodness over wickedness, of love over hatred, of life over death. Saint Ignatius the God-Bearer says that when Christians assemble in church to participate in the sacrament of the Divine Eucharist, the demons are crushed, which means that the communion of love guarantees for us the pure air of the kingdom of God, far removed from any demonic influence. In his narrative, Matthew preserves the words of the demons to Christ: ‘What are we to you, Jesus, Son of God. Have you come here aforetime to torment us?’ In particular in the use of the expression ‘aforetime’ here we should recognize the crushing of evil in the Church, even before the end of history.

And there’s another point, towards the end of the narrative, which should draw our attention: the fact that the inhabitants of the area came to meet Jesus and to ask him to leave their land. Their fear in the face of Christ’s power didn’t lead them to understand His Messianic authority and to glorify Him as God, but gave them a negative attitude to Him. They weren’t able to appreciate Jesus’ contribution and the cure He had performed for the sick men. They were afraid they might suffer further material losses, similar to the devastation of the herd of swine, and so they asked Him to depart.

Oftentimes, our material interests prevent us from seeing more clearly our spiritual interests and make us prefer subjection to demonic power to the freedom offered by God.

The message of this reading is one of liberation from demonic dominion. If financial interest, social compliance or other factors prevent us from welcoming this divine gift, then we remain in thrall to corrosive powers, under the false impression that these do not exist, simply because they no longer take the form in which previous generations conceived them, though, in fact, they continue to tyrannize us.