The Conversion of the First Christians in Thessaloniki

‘Some of them were persuaded and joined Paul and Silas, as did a great many of the devout Greeks and not a few of the leading women’. (Acts 17, 4).

When Paul preached in the synagogue in Thessaloniki, he was addressing the Jewish inhabitants of the city, in accordance with Christ’s instruction, which became standard practice for him: he would speak first to his co-religionists for whom he was especially concerned, judging by the epistles (Rom. 9-11). Thereafter he would turn his attention to the pagans.

In the specific case of Thessaloniki, after Paul had preached for three Sabbaths in the synagogue, the results, as regards conversions, were limited: ‘some of them were persuaded’. But of the devout Greeks, that is those who were proselytes, a great many believed, as did a good number of the women who had influence in society. It appears from the text that there were four categories of people whom Saint Paul addressed: the Jews, of whom very few were convinced; the devout, of whom many converted; the Greeks of whom, again, many converted; and quite a few of the leading women citizens. 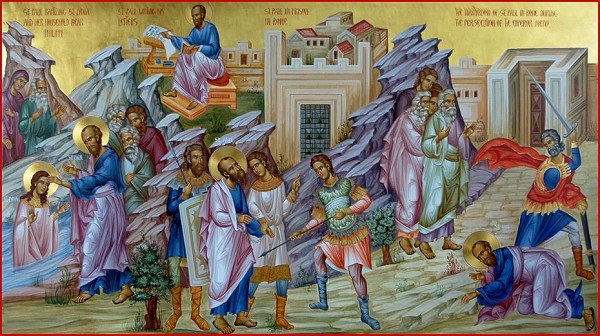 Luke rightly places ‘some of them’ at the beginning of the sentence, in contrast to the ‘great many’ of the devout Greeks, so as to demonstrate that the response to Paul’s teaching in Thessaloniki was greater among the pagans than it was amongst the Jewish inhabitants of the city.

The ‘devout Greeks’ belonged to the category of proselytes [1]. From the time of the captivity, Jews had been in contact with pagan peoples, especially Greeks. Through the synagogues [2] which were scattered throughout the whole Mediterranean region, some of these pagans acquired knowledge of the Old Testament, particularly in the Septuagint translation.

The testimony of the Acts regarding ‘prominent women’ corresponds to the general social and theological climate of the city, and so the evidence of Luke comes from authentic sources who had personal knowledge of the events taking place there. Among those who listened to Paul preaching in Thessaloniki were Iason, Aristarkhos and Secundus [from their names, two Greeks and a Roman WJL].

[1] For more on the subject of the proselytes, see I. Filippidou, Ιστορία της εποχής της Καινής Διαθήκης, pp. 465 ff.; E. Ferguson, Backgrounds of Early Christianity, pp. 512 ff. and the relevant bibliography.
[2] See the analysis by I. Galanis, Η συμβολή των συναγωγών της ιουδαϊκής διασποράς στη διάδοση του χριστιανισμού στον εθνικό κόσμο», in Καιρός, ΕΕΘΣΠΘ 4 (1994) 125-148.
[3] On the presence of these women in the synagogue, which demonstrates their active role in worship and in the Jewish community in Thessaloniki, even on a leadership level, see B. J. Brooten, Women Leaders in the ancient Synagogue, Chico, California 1982, p. 140.