The Son and Word of God, the Saviour of the Human Race

Most of the miracles performed by Jesus were the result of a request by people who needed the miracle, and only occurred after He had previously examined their faith. There were, however, miracles which he Himself wished to perform. We heard of one such today. The reason why Jesus wished to perform a miracle in this particular case, with the two possessed men, is because the latter were abandoned, marginalized by others, even their relatives, and this is why the Lord was interested in redeeming these men from the power of the evil spirits.

In today’s Gospel reading, Saint Matthew the Evangelist narrates the story of the cure of two men who were possessed, and who lived among the tombs outside the city of Gadara. They were a danger to others because of the influence which the demons exercised over them. These men were in thrall to an evil and unclean spirit and acted in accordance with its will. They were unable to look upon other people because they considered them their enemies. Their horrific appearance ensured that nobody else went to that location. 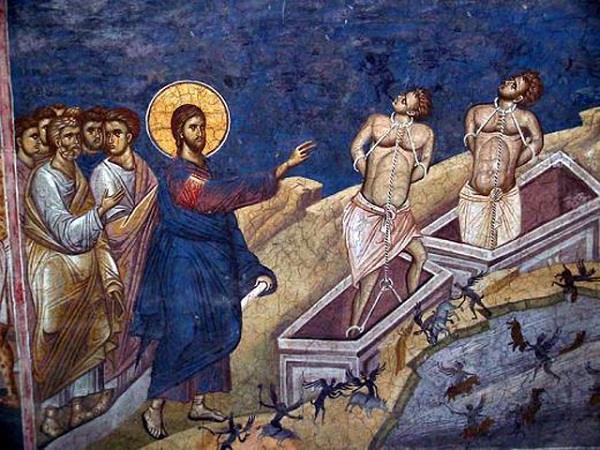 The reading contains two strange and self-contradictory events. On the one hand, the demons recognise the divinity of Jesus Christ and beg him to have mercy on them. On the other, the residents of the city refuse to receive him. The demons are unable to deny that the Son and Word of God stands before them, which is why they fear his righteous judgment.

As soon as they saw the Lord, then, they began to shout, saying: ‘What are we to you, Jesus Son of God?’ In other words, ‘What’s the relationship between us and you, the Son of God? There’s an unbridgeable gap. We tremble not only at your presence, but at your very name’. The most noteworthy thing about this cry from the demons is that they recognized Jesus as the Son of God and proclaimed it loudly and in terror. The devil retreats before no worldly power or authority. He fears and trembles only in the presence of Christ. Before Christ, the dread despot and tyrant becomes a helpless babe and a powerless opponent.

Saint Nikolaj Velimirović says that those who look Christ in the face and don’t recognise him, or recognise him but don’t confess him publicly should be ashamed. Efthymios Zigavinos points out that, although the disciples and the people saw him as a human person, here were the demons proclaiming his divinity.

When, through sin, a person is expelled from society in Christ, then the devil finds the gate open, he breaches it and captures the soul, making our heart the headquarters of his authority. All of this happens because of the detachment of the person from the mystical body of Christ.

After this, Jesus allows the demons to enter the swine, which fell into the lake and were drowned. The demons acted on the word ‘Go’, which the Lord said to them: they immediately submitted to the Lord’s command.

This is where the devil brings us: to destruction. God never abandons us, but when we abandon Him then the devil moves in, he seduces and enslaves us. The devil uses all the means at his disposal to exterminate us. Saint John the Evangelist says: ‘He was a murderer from the beginning’. He seeks the death of sinners.

One might wonder why God allowed the demons to enter the swine. The answer is provided by Saint Basil of Seleucia. He says that the reason why God allows this is to demonstrate that the demons are weaker even than pigs, when God stands in their way. Apart from that, he wishes to teach people that the demons rejoice at human loss and they take pleasure in our hardships. Moreover, we’re taught that God stands as our guardian.

The ploys the demons use against us are many and varied. But the help God gives us is many times greater. Saint Basil of Seleucia says that, had it not been for the forces from above who are allied to us, the human race would have long since surrendered to the siege of the demons. He goes on to ask when they have ever let an opportunity pass or failed to find a time to tempt us, when they have ever stopped setting snares for human nature or plotting our downfall. The nature of the devil isn’t wicked, though his deliberate choices have been shown to be.

After the two possessed men had been cured, all the agitated residents of the city ran to meet Jesus. And what did they do when they came to Him? They didn’t thank Him for curing the two men; they didn’t ask Him to cure other sick people, of whom there would certainly have been some in the town; they didn’t even listen to His teaching. They came to ask Him to go away, not just from the town, but from beyond its boundaries: ‘And behold, all the city came out to meet Jesus, and when they saw him, they begged him to leave their region’.

So Jesus departed without another word. What humility, what patience, what divine majesty. He thought to Himself that, even if He spoke to them, they wouldn’t believe, they wouldn’t be convinced by the miracle.

When we have Christ as the guide in our lives, we need not fear anything or anybody. We have nothing to fear, nor to worry about when we’re under the great protection afforded us by Christ’s embrace. As the psalmist affirms: ‘The Lord is my helper and I shall not fear what people do to me’. God is the only one Who really loves us. No matter how much we forget Him, turn away from Him, wound Him every day with our sins, He alone waits for us to invite Him into our heart. Those who receive Him, receive eternal life. Those who remove Him from their lives remain in the company of the swine in today’s Gospel, in eternal derangement and eternal death. We each have to choose what it is we want to do. Let’s not forget our goal however, which is to enter the Kingdom of Heaven which has been prepared for us, and only us.