St. Panteleimon is a Saint well-known for miraculous healings, including people with incurable diseases.  He came from Nicomedia in Bithynia, located in Asia Minor (now the city of Izmit, Turkey).  It was here that the cruel Roman emperor Diocletian established his seat to rule the Eastern part of the Empire, and where countless Christians suffered horrific martyrdom by his order.  Among those we honor are the 20,000 Holy Martyrs of Nicomedia (December 28th), who were burned during the persecutions.  St. Panteleimon’s mother was a devout Christian named Euboula.  From an early age, she took great care in giving a Christian education to her child, whose birth name was Pantoleon.  She reposed early in the Saint’s life, and has also been declared a saint, commemorated on March 30th.

Pantoleon’s father was Eustorgios, a pagan, senator and counselor of Diocletian.  Seeing his son’s inclination towards medical science, Eustorgios instructed the local medical teacher, Efrosynos, a palace physician, to teach Pantoleon in medical studies. Pantoleon distinguished himself among his peers, and began his career in medical studies with great success. 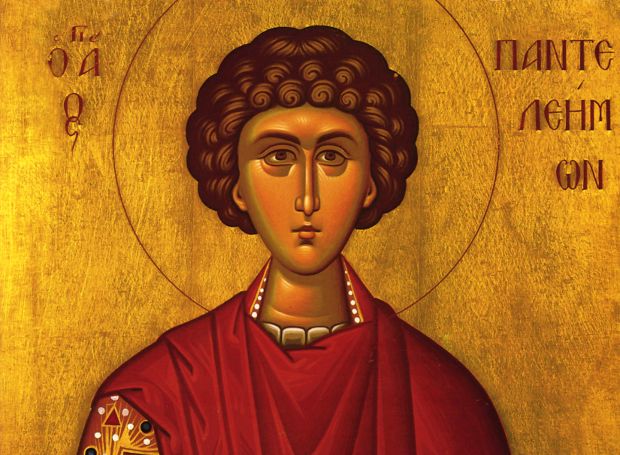 After completing his studies, in which he distinguished himself among his fellow students, he began the work of a physician with great success.  The service of the Christian physician Pantoleon had two characteristics: The first: he did not ask for money from patients, and that is why later, as a Saint, he was placed among the order of the Holy Unmercenaries (Anargyri), referring to doctors who treated the sick without being paid any “silver” (money).  Another key characteristic of his medical practice was the power of prayer.

When a patient came to Pantoleon that could not be cured with the science of the time, the Saint turned to the Great Physician, Jesus Christ, in Whom nothing is impossible.

Through the holy doctor’s prayer, many miracles occurred, which is why he is known as a miracle worker.

Naturally, many who witnessed these miracles in the name of Jesus Christ believed, and were baptized.  This of course angered the emperor, who ordered Pantoleon to be arrested and brought before him.  During the interrogation, the Saint confessed his faith in Jesus Christ as the true God.   The emperor then handed Pantoleon over to the torturers to force a denial of Christ, and it would take a long time to describe the horrors that the Saint endured.  Many pagans saw the martyr’s deep faith in Christ and the calm with which he endured the inhuman brutality, as well as God’s wonderful intervention in giving him strength.  These people also came to believe in Christ.  By a revelation of God, Pantoleon’s name was changed to Panteleimon, for his blessed work among the people.  This Great Martyr of Christ was beheaded on July 27th, surrendering his spirit to God.

The Miraculous healing of serious illnesses continue to occur, by the intercession of St. Panteleimon and other Saints.  God has given the Saints this gift, and that is why faithful Christians turn to them for help when medical science fails.   These compassionate acts of God, through His Saints, are done when in His goodness He decides that He must intervene.  Let us remember the paralytic by the pool of Bethesda, and our Lord’s miracle.  There “lay a great multitude of sick people, blind, lame and paralyzed” waiting to be healed, but the Lord only healed the man who was paralyzed for thirty-eight years, unable to be first in the water because no one was there to help (see John 5:3).   God’s intervention usually comes when all human efforts are exhausted.  As Christians we also go to doctors when we are sick, following their instructions, and as God’s word urges us: “Honor the physician…for the Lord created him” (Wisdom of Sirach 38:1).  We also take the medicine that the doctor prescribes, because “the Lord created medicines from the earth, and a sensible man will not loathe them” (Wisdom of Sirach 38:4).  In the event of an epidemic, we trust their expertise and listen to them.  This is to protect ourselves and those around us from deadly diseases, such as the Coronavirus, which recently has infected millions and killed hundreds of thousands of people.  It is not Christian to be dismissive of medical direction, and then arrogantly proclaim that Christ will protect us because “He is stronger than the Coronavirus.”  Unfortunately, this attitude has led to some people becoming ill and spreading the disease to others, resulting in deaths.  These people may “have zeal for God, but not according to knowledge,” as St. Paul the Apostle writes (Romans 10:2).  Let us remember the answer Jesus gave when Satan told Him to fall from the highest part of the temple, reasoning that nothing would happen to Him if He was the Son of God:  The Lord answered with the passage from Deuteronomy 6:16, that “You shall not tempt the Lord your God” (see Matthew 4:5-7).  In other words, a person should not put themselves or others in danger in order to “prove” their faith, on the assumption that the Lord God will protect them. This “lack of knowledge” and discernment is very dangerous, not only to the person who thinks and acts in this way, but also for society at large.   Sadly, we have recently mourned not a few dead because of this.

My brothers and sisters, as we honor St. Panteleimon the Great Martyr, may we also call upon his healing grace when faced with all manner of illnesses. We ask him to help doctors make the right diagnosis, and to administer effective treatment each time.   After we have done all we can, with absolute confidence in our Lord, “let us commit ourselves and one another and our whole life to Christ our God.” Amen.