In the hermitage of humility: the figure of an elder

We’ve come to associate the great Elders almost exclusively with monasteries, and particularly with the Holy Mountain, even though great figures among the clergy, preachers or even ordinary parish priests are often men of virtue, a real light for their flock. I shall attempt here to sketch an outline of the figure of one such, and will refer to some of his teachings. 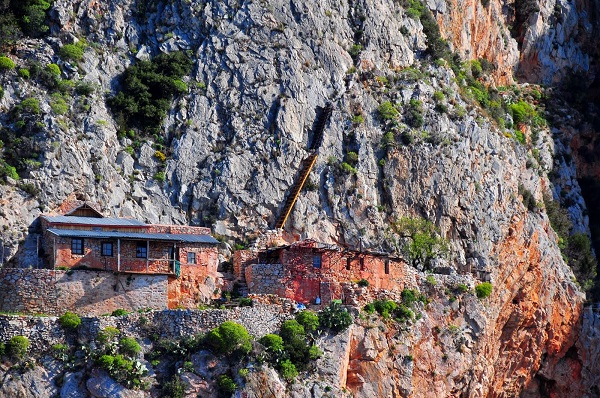 I should first explain that the priest in question came to our area to serve, although he was originally from somewhere else[1]. He told me that he’d first been a preacher at a very popular place of pilgrimage, which was visited by many people and, naturally, there was the prospect that he’d gradually be promoted to the priesthood. One day, however, he was met by the church wardens of the metropolitan church in our town, who told him that we were like ‘sheep without a shepherd’. It’s true that we’d never had a single educated preacher in our region, so there were no sermons. The area’s very poor, with a lot of residents who hadn’t even finished primary school. There was no religious education, and confession was unheard of. Everybody took Holy Communion without preparation, ‘just to be sure’. Even church-going Christians believed that when we die we’re ‘lost’, and a few old women told pious, but entirely inaccurate religious stories. It wasn’t long before heresies made their appearance with the Pentecostals and Jehovah’s Witnesses, through whom the devil was able to snatch souls.

The priest faced all of this extremely systematically with unfailing and invincible zeal.

I remembering him literally exhausting himself by going round the villages in order to preach. Of course, he spoke in the churches, but when the heresies made their appearance he preferred to speak in the village squares so as to enlighten everyone there. He never abandoned his sermon, even if a storm broke out, though he would then hold an umbrella. He took the errant doctrines one by one and destroyed them with passages from Scripture. In this way, the heresies were unable to find fertile ground on which to spread in our area. As regards the Jehovah’s Witnesses in particular, he advised us not to let them into our homes, not to talk to them on theological matters and to refer them to our priests. He saw to it that well-known clergymen engaged in the struggle against heresies would come to our town and they would hold mass meetings.

When this priest first came to our region, the following preposterous situation arose, as he himself explained to me. He had an uncle who held a leading position in a Left-wing party, so the Leftists thought that the Elder was ‘one of them’. But because he came from a wealthy family, the rich believed the contrary, that is, that the Elder was on their side. Then he founded a charitable institute in which he invested everything he had in order to help those of the lower class who were in need. So the poor thought he was on their side. Everybody ended up confused because they didn’t know whose side this newly-arrived priest was on. What they didn’t understand was that he wasn’t in favour of anyone, but of everyone. He sought every ‘lost sheep’, whoever it was, so that he could assist them in a spirit of love and sacrifice.

He founded this charitable institute out of a genuine spirit of philanthropy and he spent the whole of his life there. One day, I asked him why he chose to spend his life in the ‘melancholy’ atmosphere of sickness and weakness and he explained to me that charity is a very great virtue, and, indeed, according to the parable of the judgement, is the basis on which Christ will judge the world. The only people whom Christ called ‘damned’ are those who are uncharitable. There, in that atmosphere of disability, the Elder joyfully recollected that he ‘had everything that Christ required’. He was feeding the hungry, giving water to the thirsty and visiting the sick. Naturally he did his best to ensure that the atmosphere in the institution was nice and cheerful, in order to lighten the cross of those who were suffering.

[1] The person who wrote this article has asked us not to reveal his personal details or those of the Elder concerned. They are, however, known to the editorial team here at Pemptousia.