The Work of Redemption

As were the Jews when they gazed upon the bronze serpent, so we, too, are cured when we see Christ crucified. Let’s investigate what this cross of Christ’s is, what its benefits are and what it teaches us. 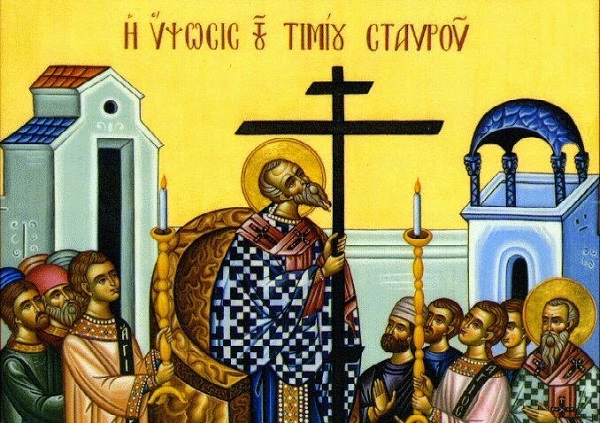 A) The cross. In the cross of the Lord we see heaven, earth and hades united. We see God, a human person and the devil. To be specific, we see the love and justice of God in the form of sacrifice, in the following way. People sinned. They had to be punished. The punishment had to be the final penalty, death, because the sin, the fall, of Adam and Eve was hubris against God, since, guided by the advice of the serpent, they wanted to become like God by eating the forbidden fruit. This death ought to have been double: death of both the body and the soul. At the death of the body, the soul would have been separated from it, and at the spiritual death, the soul would have been separated from God. But how would the love of God have tolerated such spiritual and bodily separation from His creation? But then, if He didn’t punish the transgression, or punished the angels instead, that would have been unjust. God proceeded with a sacrifice which combines His love and His justice. That is, Christ became human and was crucified. Through His death on the cross, His soul was separated from His body. This is His first death, on the cross. Then He was abandoned, was separated from the Father: ‘God, my God, why have you abandoned me?’, He cried aloud on the cross. This is the second death, the spiritual separation from God the Father, so that Christ’s human nature could drain the cup of sorrows. In this way, through the sacrifice of His Son, Who gladly accepted it, He was not unjust to anyone. On the contrary, He satisfied both His justice and His love. He satisfied His justice, because a victim was found, who was Christ. He satisfied His love because nothing is more satisfying to love than when it suffers on behalf of the loved one.

God on the cross did not show merely His justice and His love, but also His wisdom, through this combination of His loving-kindness towards us, and His almighty power, because, through the weakest means, His death, He overcame our greatest enemy, death. So on the cross are manifested divine love and justice, God’s loving-kindness and His all-encompassing wisdom. Also on the cross, the human person and the devil are present. The human person is present with its intrinsic value and the devil with his wickedness. And what better to weigh the value of the human soul against than the sacrifice of Christ on the cross? The human soul is so precious that the Son of God was sacrificed for it! The value of a piece of material can be determined by the cost of the cleansing material we use to clean it. If, for example, we were going to use a cleansing fluid to clean a piece of material and the fluid was of greater value than the material, we wouldn’t bother. For us to clean dirty material with expensive cleansing fluid, the material itself should also be of great value. So if God wanted to clean the material- our soul- with His blood on the cross, we may conclude what great value the human soul must have, since it has been cleansed with the blood of God’s Son, on the cross.

The cross also shows the wickedness of the devil, the weight of sin. Nothing else could have counter-weighed sin but the cross. A sin on the part of Adam and Eve, which occurred thousands of years earlier, brought the sinless Son of God to such a terrible death on the cross. How heavy sin is! The burden of sin is also evident on the cross from the hatred crucified Jesus had for it. The hatred of crucified Jesus for sin can be seen from the decision. He agreed to be killed, because, through death He could expunge sin. How heavy sin is to attract such hatred from Christ. This is why we see the whole wickedness of Hades exposed on the cross. And it was exposed so that it could all be included in its destruction. How great is God’s wisdom.

So the Cross of the Lord weighed God with His properties; our soul with its value; and the devil with his evil.

B) Lessons. Well, these. Who believe in crucified Jesus and don’t thank God because their sins have been forgiven through the blood of Christ? Who aren’t careful in their lives, after seeing how valuable their soul is? Who do not tremble at sin, seeing the burden it brings, given that it took the cross as a scale, God as the measurer, and His blood as the weights in order to balance that burden?

In 600 B.C., the law-maker and philosopher, Zaleucus, who lived in Locra, Southern Italy, passed a law against adultery, whereby the adulterer would have both his eyes put out. Unfortunately, his only son was caught committing this offence. As a just man, the legislator had to apply the law, but as a father he loved his son and didn’t want to leave him sightless. In order to balance justice and love, he decided to have one of his own eyes put out and one of his son’s. In this way, by the removal of two eyes, the law-maker applied the law but made sure his son was not completely blind either, thus applying his love, as well. Something similar, though much more sublime, took place in the redemptive work of Christ. God forbade sin to Adam and Eve on pain of death, but they sinned anyway. And the punishment for this was death. In order to show His love for us and to apply the death penalty as required by justice, He became a human person and died on the cross, showing His love and enforcing justice, as we saw above. On the cross, Christ suffers as God and Man and redeems the human race from our punishment.

May we have infinite gratitude to Christ the Redeemer and let us be very careful over how we ourselves live.