Did you ever see a Shroud with Pockets?

A very well-known doctor once came to see me. His wife, who was also a doctor, came with him. They were religious people, both of them. They complained that their children were living secular lives and not only didn’t observe the religious traditions of the family, but mocked them.

They called Christians backward, smug, insincere, hypocritical and impious because- according to them- their words didn’t match their deeds and their deeds weren’t Christian.
Once a year the parents held a service of the blessing of the oil at their house and, although the children had taken part when they were little, they now no longer did so. 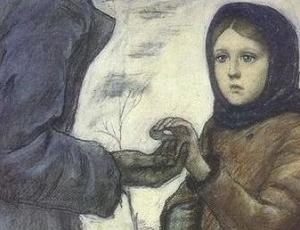 The doctor seemed very tired and depressed over the religious apathy of his children. He felt that all his and his wife’s efforts had been in vain, hadn’t taken hold, hadn’t touched their children.

At one point the doctor put his head in his hands, as if he wanted to hide his face out of shame, and said to me: ‘I think too much money’s been bad for us’.

I asked him what he meant by that and, with total honesty, he conceded that they’d overdone things and had acquired material goods that were completely unnecessary. ‘We’ve got three big houses’, he said. ‘One for us and one for each of the children. We’ve also got two holiday homes in the country, four expensive cars, a boat, bank accounts and a lot of material things’.

He continued: ‘The children were spoilt and now they accuse us of goading them. They also say that we’ve made a beautiful match between wealth and Christianity’.

He asked me what he ought to do to achieve peace and unity in the family again. I told him to give everything to the poor and to keep just the one house, one of the homes in the country and their salaries. He was horrified, lost all color and was frightened and disappointed with my answer.

He left and didn’t return. He was tied to the things down here, not up there. This was why his children were looking for another life-style, different from that offered them by their parents.

When I hear that there’s great poverty and hardship, it really hurts me and I can’t pray. I’m not saying that if you’ve got two garments give one away. That’s uncommon and would be too difficult for most people. But if you want to call yourself a Christian and you already have all of God’s good gifts, why do you sweat and strive for more, instead of giving alms and doing good works? You should know that those who have lots of money and spend it selfishly, without regard for the poverty and wretchedness of other people, are building on sand.

Did you ever see a shroud with pockets? Everything stays here. Only good deeds go to heaven. Do you know why there are wars? For money. Because the rich can’t rein in their greed and the poor don’t wish to have just the necessities, but are envious of the wealth and celebrity of the plutocracy.

Keep your pockets open, so that the money can go to acts of charity. It’s a scandal that there are pockets full of money but are sewn shut.