Our Church commemorates on the 24th of September a prominent saint, one of the great women of the Apostolic age, St. Thekla, the great Champion of the Faith.   She was born in Iconium (today’s Konya) around the year 28 AD, to a pagan family.   The Saint was 18 years old when Sts. Paul and Barnabas arrived at Iconium, in the fall of 46 AD (after having been persecuted in Antioch).  Her gentle soul was dissatisfied with idol worship, and yearned for something deeper, which she found in the teachings of the Apostle Paul.  St. Paul fervently preached the Gospel of Christ, first to the Jews at the synagogue in Iconium.  However, the fanatical Jews forbade him from preaching there, and so the Holy Apostle continued to proclaim the Gospel in the house of Onesiphorus, a man of good will.  Among the many people who came to listen was the young Thekla.  She was profoundly moved by what she heard about Jesus Christ’s love and especially, that He willingly died on the cross for the salvation of the whole world.   The young woman’s heart was warmed by a love for Christ, and she then decided to devote her life to the Lord and His work, as St. Paul had done. 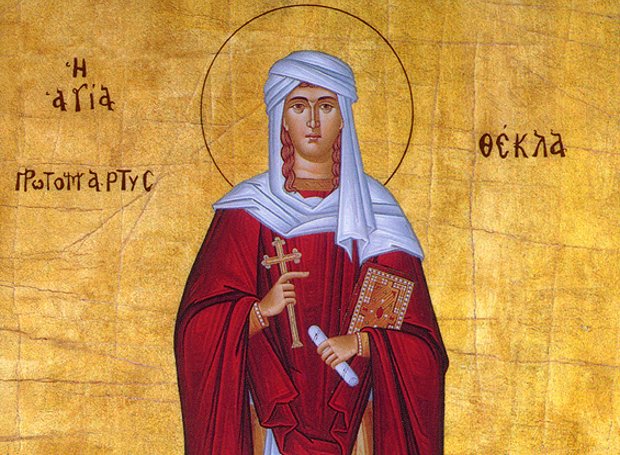 After the Apostles left Iconium, St. Thekla began proclaiming Christ with faith and zeal.  For this, she was arrested and subjected to her first martyrdom, which took place in her native land of Iconium.  She was sentenced to death by fire, but as it was with the three youths of Babylon, the flames also did not touch her.  Amazingly, a storm with torrential rain appeared and put out the fire.  The people attending the event scattered, leaving St. Thekla unharmed.  The Saint faced a second martyrdom in Antioch of Pisidia, where her missionary activity brought many people to the Christian faith.  This time, she was thrown into an Amphitheater of Antioch (which still exists today) to be devoured by wild beasts.

Neither the lions nor other wild animals attacked her, which is also what happened with Daniel in the lion’s den.  God fortified her with a hidden strength, to escape death in a miraculous way.

St. Thekla wanted to follow St. Paul the Apostle on his apostolic journeys.  St. Paul urged her to remain in her homeland, so that she may lead to Christ those who are worshiping idols.  After preaching Christ in various places, St. Thekla traveled south and finally returned to Iconium.  When she arrived at Seleucia (today’s Silifke) of Cilicia, she established herself in a cave in the mountain of Kalamon.  It was there that she spent the rest of her life in monasticism.  She devoted herself to prayer, asceticism, and learning from the Gospel.  At the same time, she also provided healing to a number of people who were sick.  Her fame spread quickly, so crowds of people started coming to listen to her words and be healed.   When the Saint reached the age of 90, the Lord called her to His Heavenly Kingdom in a glorious way. The Christians of Seleucia built a church in her honor, which is on top of the cave where she had been buried.

The miracles of St. Thekla, which marked her life, became more frequent even after her repose.  The fifth-century emperor Zeno is among those who had been healed by a miracle of St. Thekla, and in gratitude built a grandiose church in her honor.   A monastery was established in the place where St. Thekla had lived as a nun, and it attracted the faithful from throughout the Byzantine Empire.  We can certainly admire St. Thekla’s courage!  Martyrdom and persecution did not affect her missionary zeal, and this is the reason why she has been reverently honored by the Church with the title of Isapostolos (“Equal to the Apostles”), an honor which few women have received.

She chose monastic life out of a profound love for Christ, and dedicated her whole self to Him.  She rose to be the first Christian ascetic-nun, living a life of spiritual struggle in her cave. This would become the foundation for the first female monastic institution, which provided great spiritual light for centuries.  With her strong faith, she “quenched the violence of fire” and “stopped the mouth of lions” (Hebrews 11:33-34), distinguishing herself as Protomartyr (the first woman martyr).

Of course, St. Thekla owes all these things first to Jesus Christ, Who gave her the strength to reach these glorified heights; then to the great Apostle who inspired her with his word and example, so that she could know Christ deeply.   But there is also the fruit of her personal love and devotion to Christ, which was rooted in her heart, like the experiences of her teacher: “the life which I now live in the flesh I live by faith in – and with love for – the Son of God, who loved me and gave Himself for me” (Galatians 2:20).

My beloved brothers and sisters, let’s also be inspired by the shining example of the First Contender and Equal to the Apostles, St. Thekla.  When we come to comprehend the perfect love that the Bridegroom manifests in our souls in varying ways; when we feel in our hearts the desire to truly live Jesus’ own life; when we discern inside us the touch of His divine Grace calling us to remain united in the One Body with Him; then the joy of Christ will overflow within us.  This joy is spiritual and eternal, and it is this joyfulness that I want all of you to have.  Amen.