After His dialogue with Nicodemus, Christ embarks on a monologue on His own work of redemption, under three headings: revelation, redemption and judgement.

In the Gospel of Saint John (3, 11), the Lord says: ‘In all truth, I say to you, we speak of what we know, and bear witness to what we have seen, but you do not receive our testimony’. ‘I’m telling you honestly’, the Lord says to Nicodemus, ‘that rebirth in this manner is my teaching and that of John the Baptist, and it’s real, because we speak of what we know’. In other words, ‘We preach what we know from a trustworthy source. ‘As for what we saw, this is confirmed by the Holy Spirit, Whom we saw in the form of a dove at my baptism. This is why we bear witness to what we saw. But you Pharisees don’t set any store by this’. He goes on to say: ‘I have told you earthly things and you do not believe; how then can you believe if I tell you heavenly things?’ He means that He’s told them earthly things that should be obvious to everyone, such as, for example, the fall, which even the Gentiles are aware of (’what is born of the flesh is flesh’), and the longing for rebirth through some redeemer or other and they don’t believe Him. So how can He tell them about heavenly, that is more spiritual, things such as the triune nature of God, the depth of the mystery of redemption and so on. ‘This is the extent to which your false Messianic superstitions have hardened your souls’. 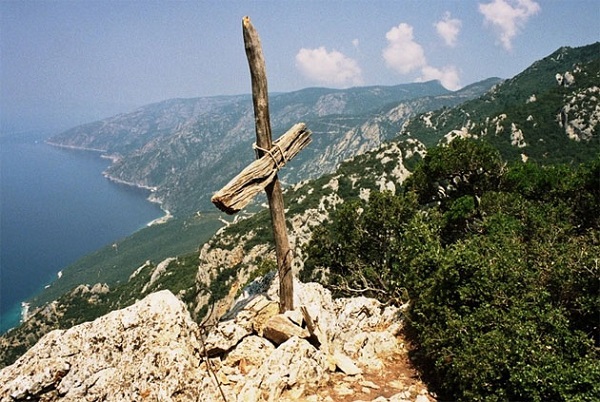 ‘The truth is that I’m telling you things that no man has ever said before, such as the combination of the ‘water’ of baptism and the ‘spirit of divine grace, which is for salvation. But my words should be believed, because “No one has ascended into heaven except he who descended from heaven, the Son of Man, who is in heaven’”. Christ is referring to Himself as having been and being in heaven, in the bosom of the Father. This is how the Lord deals with the revelation of the truth.

Thereafter, He goes on to talk about redemption from sins, in vv. 14-16, saying: ‘And as Moses lifted up the serpent in the wilderness, so must the Son of Man be lifted up, so that whoever believes in him will not perish, but will have eternal life’. As a symbol of His crucifixion, the Lord uses the event described in the Old Testament (Num. 21, 4-9), when Moses raised a bronze snake on a pole, in the desert. The Jews were in the last of their forty years of wandering in the wilderness of Pharan and became disillusioned with God. As a punishment, Gods set poisonous snakes on them, which killed many Israelites. The latter repented and God ordered Moses to make a bronze serpent and set it up on a pole. Those of the Jews who had been bitten by the snakes and had repented were able to look at this serpent and be cured. The Lord explains that, in a similar manner, the Son of Man will be raised on the cross, so that those who have been poisoned by sin can look upon Him and, if they believe in Him, can be cured of sin and can receive eternal life. This eternal life consists of the life of grace here, and the life of glory in the life to come. The divine grace given here is the beginning of glory; the glory there is the terminal point of grace here. Anyone who bears grace within them here, already has eternal life within them. (When Nicodemus took Christ down from the cross, he would understand the explanation of these mysterious words). This is the essence of our redemption. Christ then goes on to reveal the reason behind our redemption: ‘For God so loved the world that he gave his only-begotten so that whoever believes in him shall not perish, but have eternal life’. Therefore, the cause of our redemption is not our own worth, but God’s great love for us.

Christ then proceeds to the judgment (vv. 17-21), to the results of redemption. Although redemption was accomplished for all , not everyone will be saved. This is not the fault of God, but depends on the life each of us leads: ‘For God did not send his son into the world to judge the world, but that the world might be saved through him’. ‘Whoever believes in him will not be judged’, that is, will not be condemned. If some are removed by the Son of Man at the future judgement, we should not be shocked, because that condemnation is an external expression of that which the sinners have already brought upon themselves, as the Lord states quite clearly: ‘Whoever does not believe is already judged’. If you don’t believe, you’ve already condemned yourself because you didn’t believe in Christ as the only-begotten Son of God.

Analyzing the cause of condemnation further, He goes on to say: ‘And this is the judgment: light came into the world, and people loved darkness rather than the light because their works were evil’. The unbelieving Jews did not love Christ, Who is light, but rather sin, which is darkness. ‘Because their works were evil’. They loved the darkness rather than the light because their works were sinful, and the cause of this lack of faith was their immoral way of life: ‘Everyone who does evil hates the light’. ‘They do not come to the light lest their works be exposed’. In other words, the whole reason behind all this is that their deeds should not be made common knowledge. The deeper cause of their lack of belief and immoral way of life is their lack of any awareness of their actual condition, because sin is not merely a wound, it is also an impairment of vision, what the Lord calls a beam in the eye (Matth. 7, 3). On the other hand, ‘But those who do what is true come to the light, so that it may be clearly seen that their works have been carried out in God’. If you’ve done good works and have good intentions, you come to the light of Christ where it becomes apparent that your deeds were performed with God’s assistance. So a moral way of life affects faith, but, more particularly, an immoral life-style leads to lack of faith and condemnation.

We do not know the outcome of Christ’s discussion with Nicodemus. It would appear, however, that the seed fell into a good heart, because Nicodemus would later defend Jesus against the Sanhedrin (Jn.7, 50-1) and would show friendship towards Him after the crucifixion. (Jn. 19, 39-41).