Saint Hermione, the daughter of Saint Philip the Deacon

Saint Hermione, one of the four daughters of the Deacon Philip, who, according to the evidence in Acts (21, 8-9) were virgins and prophetesses, Hermioneand Eftyhis went to Ephesus to meet Saint John the Theologian. But because the beloved apostle had already been taken up into the heavens, they followed his disciple Petronios. Under his tutelage, Ermioni, who was already familiar with the medicinal arts, also learned to cure people’s souls. 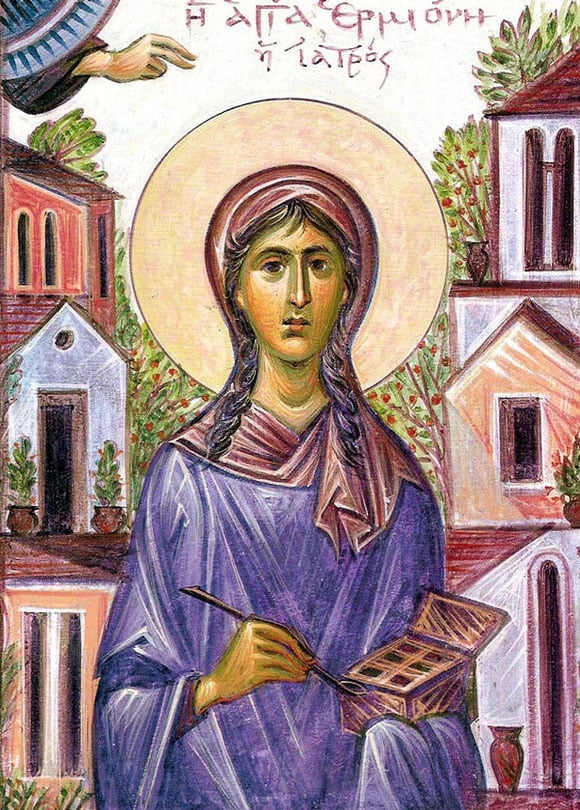 At that time, Emperor Trajan was passing through Ephesus on his way to campaign against the Parthians (114). He heard a great deal about the miraculous works and prophecies of Hermione and bade his people summon her. Initially, he attempted to make her deny Christ, but couldn’t convince her and so he ordered that she should be beaten about the face. Hermione saw Christ seated in the tribunal in the form of Petronios and accepted the blows with pleasure. When she prophesied that he would defeat the Parthians and that he would be succeeded on the throne by his son-in-law, Trajan set her free. After this, Hermione established a hostel for the poor in Asia, where strangers found balm for their bodies and their souls.

When, in accordance with her prophecy, Hadrian came to the throne in 117, he was told about the saint and sent for her. To his questions about her age and family Hermione replied: “Christ knows how old I am and where I come from”. The emperor was enraged at her boldness and ordered that she be stripped, ruthlessly scourged and then be thrown into a vat full of boiling pitch, sulphur, asphalt and lead. As soon as Hermione entered, the fire was extinguished and the martyr seemed to be standing in dew. Hadrian was concerned to verify what he was seeing, so he went up and touched the vat with his hand. His skin came away at once and his nails fell off. Hermione shouted to him from the vat: “The God of the Christians is great”. The emperor was abashed and ordered that she be thrown, naked, into a large red-hot copper vessel. But her guardian angel protected her and dissipated the fire, which actually burned the people around her.

After these wondrous signs, the martyr pretended that she wanted to sacrifice to the idols and was taken to a pagan temple. Through her prayers, she overturned the statues and shattered them into pieces. Hadrian took this display of derision very badly and handed her over to the executioners, Theotimos and Theodoulos, to have her beheaded outside the city. 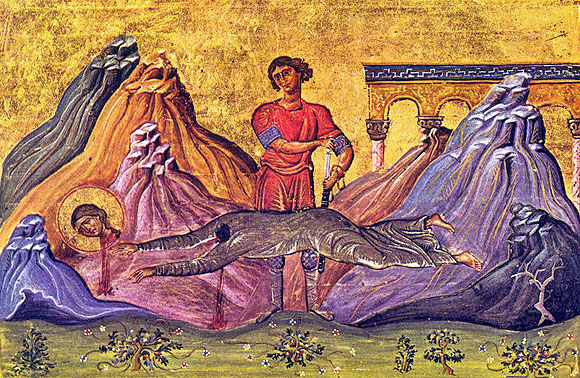 As they hastened to complete their task, their hands became paralysed. Their minds were illumined, they believed in Christ and, at that very moment, they were healed. They requested the saint to pray for them and gave up their souls in peace. Then the saint herself, having avoided all the snares of the devil, rendered her soul to God and was buried in Ephesus.

There are a number of features of interest in this account. In the first place, Hermione was the daughter of Philip the Deacon, one of the Seventy, who should not be confused with Philip the Apostle, who was one of the Twelve.

Second, Hadrian’s question as to the saint’s age is very much to the point. Given that she is mentioned in Acts, and depending on the date of that book, she must have been a very- though not impossibly- old woman when she was brought before Hadrian in 117.

Third, the names of the executioners are clearly assigned to them after their death. Theotimos (=Timotheos, “honoured by God”) and Theodoulos (“servant of God”) could hardly have been their names under the pagan emperor Hadrian.

And lastly there is the dilemma of how to render her name. The simple solution is “Hermione”. But the first girl we know of with this name was the daughter of Menelaus and Helen, of Sparta, who would have spoken the Doric, rather than the Attic dialect. Her name would therefore have been, in that Ancient Greek dialect, Hermiona, just as her mother would have been known as Helena. By the time the saint was born, however, the language had changed and she’d have been known as Ermióni, which seems to me such a beautiful name that I’m reluctant to change it.