The good and bad tenant farmers (13th Sunday of Matthew)

Today’s Gospel reading tells us, in parable form, about a vineyard planted by a householder, which he entrusted to tenants who were supposed to give him the fruits from it. When harvest time came, the owner sent servants to the tenants in order to take the produce from the vineyard. But the bad tenants had no fruit to give, because they were idle, and they abused the servants of their master. When the owner sent other servants to the tenants, they suffered the same fate. Finally, the good and patient owner sent his own son to the tenants in the vineyard, as his direct representative, to take the produce. And this is where the wickedness of the tenants found its most extreme expression. Because, when they saw their master’s son, who was the rightful heir to the vineyard, they attacked him, dragged him out of the vineyard and murdered him, in order to gain his inheritance. 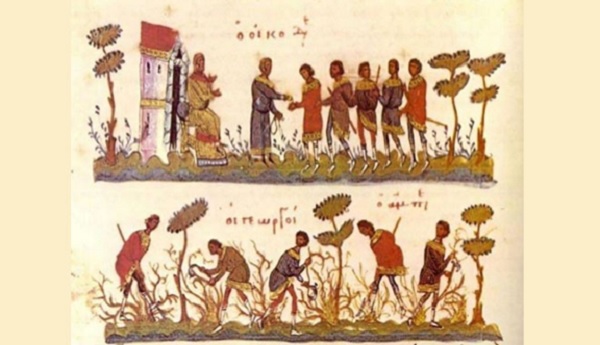 What does this parable of the vineyard mean, my fellow Christians? The vineyard is the people of Israel, the nation planted by God for the purpose of completing a mission towards other nations. Read chapter five of the Prophet Isaiah if you want to see the love of God for His vineyard, the people of Israel. He appointed tenants, the archpriests, scribes and priests, to teach and admonish. But they neglected their task, were indifferent to their mission and regarded the divine vineyard as their own. This is why they put to death the prophets, those faithful servants of God. And, even worse, they murdered the Son of the Lord Himself, Jesus Christ, in a horrific manner, on a cross. They saw Him as the real heir to the vineyard, the kingdom of Israel and, in order to take His inheritance they killed him- outside the vineyard, as today’s Gospel reading tells us, outside Jerusalem, ‘outside the gate’ .

Why is this excerpt from the Gospel read now? Because we’re approaching the great feast of the Cross on September 14 and, with its readings, the Church prepares us for a better understanding of the feast, which is like great Friday and is therefore honoured with a fast. Today’s Gospel, with the story of the bad tenants, spoke of the death of Christ which is proclaimed triumphantly on the feast of the Elevation of the Precious Cross. This is why, forty days before the feast, we celebrate the Transfiguration of the Lord on August 6, at which His glory is declared. As the kontakion of the feast says, this is so that, when we see Christ suffering at the feast of the Elevation, we should realize that He’s not doing so out of weakness, but willingly, because we saw His glory and His power at the Transfiguration.

In the Gospel today, we heard about the bad tenants but let us take the decision to become good tenants of God’s vineyard. Because Christ has called us, too, to work for the vines in His vineyard. As Saint Gregory Palamas explains , this means working for ourselves, because the Lord said that we are the vines in God’s vineyard .

Souls that hasten to work willingly in the life-giving vineyard and to become its vines, that labour for the sake of themselves, as Saint Gregory Palamas teaches, first of all cut away everything that’s superfluous. Unnecessary things are an obstacle to providing worthy fruits for God’s store-house. What are they? Riches, sensuality, vain glory, the vanities which come and go, every abominable and wicked passion of the soul and body, the whole welter of the conceited thoughts in the mind, everything heard and seen and every word that can injure the soul. Because, Saint Gregory tells us, unless you take the greatest care in pruning and cleaning these shoots of your heart, you’ll never provide fruit for eternal life.

As good tenants of God’s vineyard, we must provide fruit, our vines must blossom with virtues. We must drink the sweet wine of Christ and cut off the sinful pleasures of perceptible things. Saint Maximos says: ‘The vine makes the wine, the wine causes inebriation, inebriation brings [an evil] ecstasy. When well-planted reason, which is the vine, is cultivated through the virtues, it gives rise to knowledge; knowledge produces good ecstasy, which enables the mind to transcend its connection with the senses’ .

The sweetest fruit that we should give, as vines spiritually planted in God’s vineyard, Christ’s holy Church, is humility, which is itself depicted as a vine. And the more this holy vine grows, the more it displays different forms. According to Saint John of the Ladder, it looks differently in the winter of the passions from the way it does in the summer of the virtues, but all of its forms contribute to the good production of the vine. Saint John says that when the grape of this holy vine of humility begins to blossom within us, human glory and praise start to have little effect on us, and we feel both weary and hostile towards them. At the same time we get rid of anger and irritation from within us. The more this vine grows within us, the more we reflect on the weight of our sins and reckon any good we’ve done as nothing and a mere sham . […]

Let us ask, by God’s Grace, to be fruitful vines, rooted in the divine stock, which is Christ and His holy Church. May we ever drink in the Church and from it, the Wine, the sweet distillation of the Cross, the Blood of Christ, which we taste here in the Divine Liturgy.