The eschatological nature of the Church is revealed especially in the sacrament of the Divine Liturgy. The celebration of this sacrament is the central and pre-eminently eschatological action of the Church. It is its Liturgy (= function). It constitutes the perfect community which overcomes the divisions of space and time and manifests the kingdom of God to the world. Participation in the Divine Eucharist is communion with Christ. It is participation in His eternal life (See, Jn. 6, 33-7). It is entry into His kingdom. These things are not presented metaphorically, but are real features which are presented as experiences to the members of the Church. The Christian life is of an empirical nature. And the content of this experience is the presence of the kingdom of God. This presupposes that the life of the faithful in the Church is directed towards it and nourished by it.

Participation in the kingdom of God means that time is transcended. Just as the presence of the kingdom of God in the world abolishes the divisions of time. The Liturgy of the Church, the Divine Eucharist, which is the pledge of the  kingdom of God, overturns any notion of a sequence of time. It is the supper of the Christ Who offers His body and blood before His Crucifixion, and Who continues to act after His Resurrection. 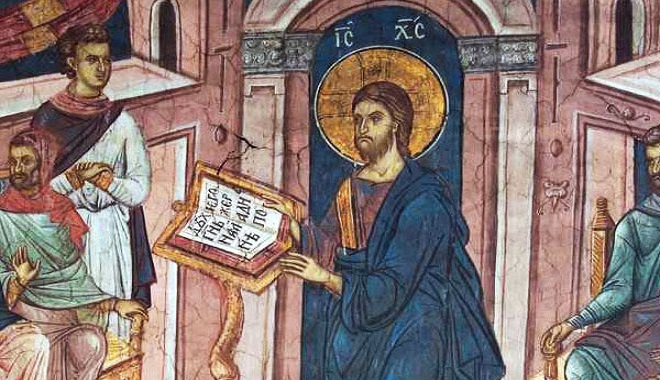 The Church of Christ is not a conventional local social group, but a catholic [i.e. universal] society. It is catholic because it extends not only ‘to the whole of the world’, but also ‘to the whole of time’ (St. John Chrysostom, Interpretation of Psalm 144,4). The Church also alludes to eternity in the world and directs the world towards it. The institutions of the Church, as Saint Basil the Great points out, transport people’s intellect ‘from things present to those of the future’. In this way, the same bishop continues, every time the faithful kneel down and then stand up, they are testifying in practice to that fact that ‘through the sin into which we have fallen and through the love for humankind of our Creator, we have been recalled to heaven’ (On the Holy Spirit 27, 66).

This simple and expressive gesture of kneeling provides St. Basil with the opportunity to mention the new dimensions within which the life of the faithful unfolds. With the acceptance of God’s loving-kindness, as a force that elevates us from earth to heaven, people see new ways of orientating themselves within the straight line of history. Eternity is linked with temporality. So every day, every hour, every moment on the time-line assumes a limitless breadth and unfathomable depth. It becomes the vessel of eternity and is available as an opportunity for the communication of that which has passed with that which is transcendent. The eternal becomes admixed with the temporal. And time is not restricted to an evanescent and irreversible stream, but, rather, every moment provides people with the opportunity of being inducted into the infinite love of the eternal God.

Transcendence of the world is realized in Christ within the Church through the grace of the Holy Spirit (Cf. ‘Let grace come and let this world pass away’). The Church is not eradicated together with the world. The end of the world, which will be the end of time, will not also be the end of the Church. The Church leads to the kingdom of God. The manifestation of the kingdom of God does not occur all of a sudden, but is gradual. In the same way, the end of the world will not occur just like that, but will appear first as a preliminary engagement and then as the final resolution. The initial engagement as regards the end was the devastation of Jerusalem and the resolution will be the final extirpation.

When Christ refers to the end of the world, He links the devastation of Jerusalem with the extirpation of the world and ends with the declaration: ‘Truly, I say to you: this generation will not pass away before all this comes to pass. Heaven and earth will pass away, but my words will not’ (Matth. 24, 34-5). The devastation of Jerusalem  occurred before the generation to whom Christ was talking passed away. And the final extirpation will occur before the generation of Christians has passed away (On the interpretation of the word ‘generation’ as the ‘generation of Christians’, see St. John Chrysostom, Homily on Matthew 77).

Before time, and after time, there is eternity and perpetuity, which are beyond time (Cf. Basil the Great, On the Hexameron, 1, 5). Time acquires meaning  because it is linked to eternity and perpetuity. It becomes real history because it is united to eschatology (Cf. O. Clement, Transfigurer le temps). History makes no sense without some sort of ending. And after the advent of Christ, the end of history exists in every one of its moments. So, for the Church, the meaning of history lies in the boundless depths of each of its moments, not in the external alterations of the flow of time. In the Church the length of time acquires value with the application of its depth. And the depth of the time and of history offer the only substantial justification of their length.

Limiting time to a one-dimensional movement inevitably leads to disenchantment and disappointment. The history of civilizations is one of disenchantments. Even what we call Christian civilization, as a human creation in the straight line of historical time, shares the same fate. But what the Church offers is an exit from the secular cul-de-sac. It is a transfer from the pointless temporal flow and maelstrom into the fullness of divine love and life.

Secular space and secular time are linked to love of the world. But they are transformed into positive factors when they are used as starting points for entry into the truth of eternal life. As Saint Basil the Great observes, this present life is, to all intents and purposes, death. The life that Christ calls people to is different (On Psalm  33, 9). It is the life which is not subject to the deviousness of the world and the disenchantment of death. It is the life which transforms people and places them beyond human capabilities and perspectives. It is the life of the kingdom of God, which is manifested in the Church of Christ and is offered to people here and now.

Christians are called upon to use their time well and to invest it in the prospect of eternal life (See Eph. 5, 16; Col. 4, 5). The relativity and incongruity of the present life are not negative circumstances or mere episodes, but opportunities for a transferal ‘from action and instability to solidity and immobility’ (Gregory the Theologian, Discourse 7,19).  In this perspective, everyone finds their place and their validation. Nothing is abandoned. Nothing is ignored.  Nothing is treated as coincidental. God is the Lord of the world and of history, the All-Observant and All-Powerful. Joy and pain, success and failure, progress and catastrophe are not mutually destructive but are offered as means of personal completion, for the overall richness of our lives, a process which is realized in the Church.

The Church does not abhor time, but is manifested within time. It neither mourns what is past, nor worries about that which is to come. The close of the day which has passed is the beginning of the day to come. Every Vespers introduces the new day. And while people may be concerned about what they have lost or be glad over what awaits them, while they may be sad about the past or fearful of the future, the Church calls upon them, steadfastly and calmly, to proceed along a path which has been entrusted to the hands of God. The Almighty, Who is the Lord of time and history.