Holy Communion: the Medicine of Immortality and Antidote to Death

‘You see the deifying Blood: have fear.

It is a coal that burns up the unworthy.

God’s Body both deifies and nourishes me:

it deifies the spirit and nourishes the mind strangely

If we intend to take Holy Communion the next day, we include in our prayers the evening before, the Service of Holy Communion in which the above words are included. If we really understand what we’re reading, we realize how precious the wondrous and dread mystery is. 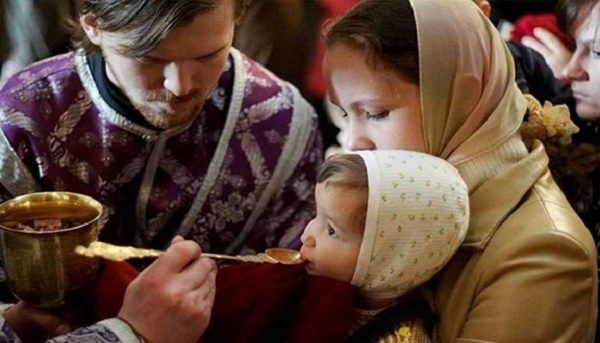 Holy Communion is real, not symbolic communion; it’s the union of Christians with our Savior, Jesus Christ, precisely because, in our Orthodox faith, the bread and wine are really transformed by the almighty energy of the Holy Spirit into the Body and Blood of Jesus Christ.

The bread and wine at the Holy Eucharist aren’t symbols, as the heterodox Protestants believe, but they are actually the real Body and Blood of Christ.

In this great and wonderful mystery, when we partake of the Body and Blood of Christ, we partake of our Theanthropic Lord Himself, since, in His person, His human nature, His flesh and blood are hypostatically united with His divinity. It follows that, when the faithful partake of His spotless Body and His precious Blood, we’re also partaking of the divine nature of the Lord and we truly become gods by grace.

And since scientists and even doctors who are opposing this great God-given mystery which makes gods of us Christians have raised the sacrilegious and insolent specter of the false information that it’s very likely that viruses and deadly germs will be spread through Holy Communion, it’s necessary to answer and reject this crude insult and slander against our faith.

As we’ve said, the Holy Eucharist is the participation by the faithful in the Body and Blood  of Christ. Orthodox theology stresses that because of Christ’s union of His divine and human natures in a one person, the divine nature gives  or ‘circulates’ its characteristics (its ‘perfections’) to our human nature. These are freedom from the passions, immortality, bliss and all its other divine attributes. In the same way, when we Christians partake of the Body and Blood of the Lord, we really are made gods by grace and share in the divine attributes (‘perfections’), without for a moment ever ceasing to be human. So how is it possible that this supreme sacrament, which makes us gods, which vivifies us and, by His grace, makes us immortal should also spread deadly viruses? Only atheists or heretics (Protestants) deny the transformation of the Eucharistic Gifts into the Body and Blood of Christ and allow this untoward and sacrilegious thought to insinuate itself into their minds.

Holy Communion can indeed harm us since it’s ‘a coal that burns up the unworthy’, that is the unrepentant sinners. This harm, however, isn’t caused by germs and viruses, but by us coming to the great sacrament without repentance and forgiveness of our sins by our confessor. In this case, instead of the Divine Eucharist being an agent of eternal, immortal life it becomes the source of ailments and perhaps even the death of the body, as Saint Paul incontrovertibly assures us (I Cor. 11, 27-30). So the cause of any possible harm is clearly our own lack of contrition, our spiritual obduracy and insensitivity rather than any germs.

The Divine Eucharist (Divine Liturgy) and all the Christian sacraments are celebrated by our priests within the holy churches, in the physical presence and with the personal participation of the faithful. In no way can the Divine Eucharist be replaced by private prayer in the home, which, while necessary, is no substitute for the Divine Liturgy. This is why, at times of harsh persecution of the Church (Roman Empire, Turkish rule, atheist Communism), Christians would go secretly to the catacombs or, at risk to their lives, to the few churches which remained open, in order to take part in the Divine Liturgy and partake of the Spotless Mysteries.

The Divine Eucharist is the central sacrament of our Church, which forms the Body of Christ, because it unites us with Him, making us ‘sharers in the divine nature’ (2 Peter, 1, 4). It also makes us a single entity among ourselves, as the Most Holy Body of Christ, the Church, completing us as true kin to each other in Christ. In the Orthodox Church our relationship with God isn’t only spiritual-mystical-individual, as is the case with prayer, but it’s also visible and corporeal by means of all the faithful coming together, as at the Divine Liturgy (Holy Communion). This is why, without the Divine Eucharist and the other holy sacraments, the Church would no longer fulfill its task of sanctifying us and making us gods by grace.

In every era, we Christians go to church and, with proper preparation, partake of the Last Supper of the Lord, that is the Divine Eucharist. We do so especially in today’s situation, when certain state functionaries and employees in the mass media are intervening and sermonizing in an effort to spread human fear among us by claiming that partaking of Holy Communion carries with it the risk of becoming infected by the corona virus. Those who accept and embrace this malicious propaganda against the Holy Chalice of the Divine Eucharist are undermining their spiritual life and their eternal future. This is because, by not obeying Christ, Who told us to celebrate the Divine Eucharist and to partake, they’re closing the entrance door to eternal life, which Jesus Christ opened for us. They’re afraid that, instead of the gift of sanctification and immortality, they may incur infection and death through the Precious Body and Blood of the Lord.

As for the functionaries of the State, we would ask them not to close down our churches again. If they don’t want to respect our sacred tradition, let them at least respect the constitution which they have sworn to uphold. The constitution regulates the relationship between Church and State with great clarity: According to the Patriarchal Tome of 1850, which has been incorporated into the constitution as article 3, the supreme ecclesiastical authority, the Holy Synod of the Church of Greece administers ‘ecclesiastical matters in accordance with the divine and sacred canons, freely and unhindered by any secular intervention’.

We therefore call upon all those who wish to experience the continuation of the lives of the saints of our Church to attend our churches and, with fear (reverence) of God, faith and love, with the boldness to overcome human misgivings. In the words of one of the communion prayers:

‘Of your mystical supper

today receive me as a communicant.

For I will not tell the Mystery to your enemies,

nor will I betray you with a kiss, as did Judas.

But as the Robber did, I confess you:

Remember me, Lord, when you come in your kingdom’.

The Board of the Panhellenic Union of Theologians