Luke the Evangelist, a scientist and artist Saint

Saint Luke the Evangelist came from Antioch the Great in Syria, was a doctor by profession and an excellent artist.

At the time of the Emperor Claudius, he was in Thebes, Boeotia, practising medicine. It was here that he met Saint Paul and, after he had come to believe in Christ he abandoned idolatry, the folly of his ancestors. He also ceased to be concerned with medicine, that is healing bodies, and dedicated himself to preaching the Gospel, in order to bring souls onto the path of salvation and redemption. 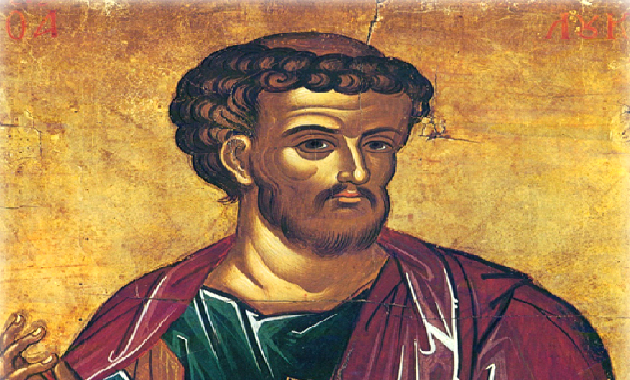 Apart from oral preaching, Saint Luke also wrote, at Saint Paul’s dictation, the Gospel which bears his name, which he sent to some high official called Theophilos, who also believed in Christ. Later he also wrote the Acts of the Apostles, also for the same Theophilos. After he separated from Saint Paul, Luke travelled on foot throughout Greece, finally returning to Thebes where it is said he departed this life in peace at the age of eighty.

In the fourth century A.D., Constantius (337-361), the son of Constantine the Great, brought the holy relics of the saint from Thebes to Constantinople and deposited them in the church of the Holy Apostles, below the altar, together with the relics of the holy apostles Andrew and Timothy.

It is said that, using the wax and mastic technique, Saint Luke was the first to paint an icon of the Most Holy Mother of God, holding Our Lord Jesus Christ in her arms. After that he painted another two and took all three of them to the Mother of God to see if they pleased her. As soon as she saw them, she accepted them with great delight and said: “Through me, may the grace of Him Who was born of me be with them”. Saint Luke then painted icons of the chief apostles, Peter and Paul. Since then, this beautiful, honourable and God-pleasing task, that is the representation of saints in icons, has spread throughout the world.

In 1204, the Crusaders stole the relics from Constantinople during the sack of the city (4th Crusade) and took them to Italy. Either that or Despot George of Serbia bought the relics from the Ottoman sultan Murad II for 30,000 gold coins. After the Ottoman conquest of Bosnia, the kingdom’s last queen, George’s granddaughter Mary, who had brought the relics with her from Serbia as her dowry, sold them to the Venetian Republic. In either case, the body now rests in the Abbey of Saint Giuliana, in Padua and the head is in Saint Vitus’ in Prague.

In 1992, Metropolitan Ieronymos of Thebes and Livadia (as he then was; he is now Archbishop of Greece) requested the return of a “a significant fragment of the relics of St. Luke to be placed on the site where the holy tomb of the Evangelist is located and venerated today”. This prompted a scientific investigation of the relics in Padua, in which empirical evidence confirmed that these were the remains of an individual of Syrian descent who died between 72 and 416 A.D. The Bishop of Padua then delivered to Metropolitan Ieronymos the rib of St. Luke that was closest to his heart, to be kept at his tomb in Greece.

On December 22 1997, at 1.30 p.m., myrrh appeared on the tomb and since then the interior has been suffused with fragrance.