On 23 October, we keep the memory of Saint James, the Brother of Our Lord and first Bishop of Jerusalem. One of his successors in the 17th century was a most remarkable man, Patriarch Dositheos. He was born in the small town of Arahova, in the province of Corinth. At the age of 15, he was ordained deacon and, in the same year (1656), he left home and went to Constantinople. While there he met Patriarch Païsios of Jerusalem, who took him under his wing. Thus began his long association with the city. In 1661, Nektarios, a learned monk from Sinai, was elected to be the new Patriarch of Jerusalem and Dositheos because his arch-deacon just before his 20th birthday. Then, on 23 October 1666, Patriarch Nektarios consecrated Dositheos Metropolitan of Caesarea in Palestine. He had just celebrated his 25th birthday. More was to come. In 1668, Nektarios, overwhelmed by the troubles of the Patriarchate, announced his decision to resign. Dositheos was dispatched to Larisa where he met the Sultan of the Ottoman Empire, within the realm of which Jerusalem lay at that time, and received a firman (edict) allowing Nektarios the choice of his successor as Patriarch of Jerusalem. So it was that, on 13 January 1669, at the age of 28, Dositheos was elected Patriarch of Jerusalem by the Synod of Constantinople. 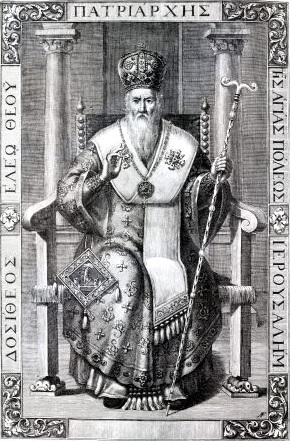 Patriarch Dositheos as represented in the ‘Twelve Books’.

His first task was to clear the enormous debts of the Patriarchate of Jerusalem, which had accrued because of swingeing Turkish taxation. He therefore sent Nektarios back to Jerusalem in his stead and set off on a tour of towns and cities in Bulgaria, Wallachia and Moldavia to collect alms. So successful was he that he paid off the bulk of the debt and still had enough resources left to make a start of renovating the Church of the Nativity in Bethlehem. This was the beginning of a pattern, with Dositheos going on journeys in 34 of the 37 years he served as Patriarch, in order to preach, teach and collect alms to keep the finances of the Patriarchate healthy.

A man of great ability and energy, then, but what makes him even more remarkable is that he somehow found time to edit a number of books and write others, including the monumental work entitled ‘History concerning Those who Served as Patriarchs in Jerusalem, Divided into Twelve Books’. Each of these books is a hefty tome in itself.

The first book naturally begins with Saint James who, he says, combined all the virtues of the saints in one person. With a masterly command of detail, Dositheos investigates the nature of James’ degree of kinship to Jesus. He points out that the people of Nazareth said of Christ: ‘Is not this the carpenter’s son? Is not his mother called Mary? And are not his brothers James and Joseph and Simon and Judas? And are not all his sisters with us?’ (Matth. 13, 55-56). Dositheos establishes that James was not the son of Our Lady the Virgin Mary and Mother of God. He concludes that he was a cousin in some degree.

He continues: this James was sanctified from his mother’s womb. As a Nazarene [i.e. a member of the sect known as ‘Nazarenes’] he drank no wine or strong liquor; he never ate meat; he never shaved; he was never anointed with oil; he never bathed or washed his hair… He never put sandals on his feet, but always walked barefoot and always wore white garments and linen… He remained a virgin all his life and, from his constant kneeling, his knees became calloused and resembled those of a camel. Indeed, Chrysostom adds that his forehead was swollen and black from being smitten to the ground so often. Even the hem of his garment was not without spiritual contention, since young and old vied with each other to touch it. He also entered the holy of holies and there prayed for the people in their ignorance, whence he was called “the Just”… Clement Stromateus [i.e. the Alexandrian] says that after the Ascension of the Savior, in order to avoid friction over who should be first among Peter, James and John, who had been honored by the Lord [at the Transfiguration], (since whoever wished to take the throne of Jerusalem would have authority over the others), the decision was made to elect James… 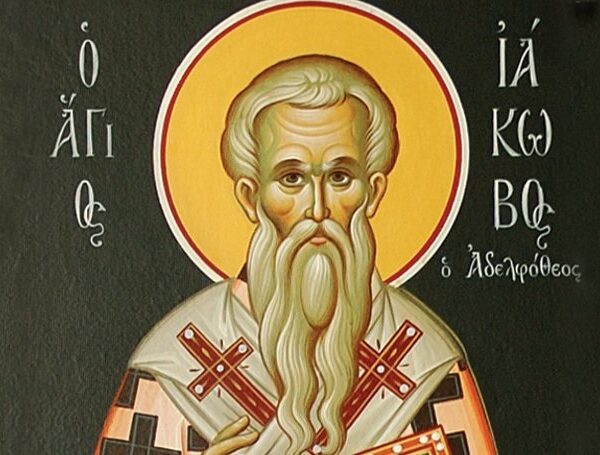 But let us come to the martyrdom of James the Just… When Paul had appealed to Caesar’s judgement and had been sent to Rome by Festus, the Hebrews despaired and turned all their anger and rage towards James. The High Priest at the time was Annas, a bold and harsh man, conceited, and a Sadducee by religion. He seized the opportunity (Festus having just died and Albinus being on his way to Jerusalem) and called a council at which he called for James to be stoned because he was impious and held erroneous views. The majority, however, did not agree to the shedding of the blood of this just and innocent man. So the priests and scribes came to the saint saying: “Behold, we all invite you to teach the people about Jesus at the great feast of the Passover, since the people believe he is the Messiah. So go up onto the wing of the temple and teach about Jesus, since, apart from us, many Gentiles also desire to believe in your words which are sweeter than honey and more precious than topaz”. They led the saint onto the wing, that is the roof, of the temple where there was an elevation and space like a tower, with air all around it. The elders of the people asked: “Tell us, Just one, in whom we are all obliged to believe, which is the gate of Jesus the crucified?” And the Just one boldly cried aloud: “Why are you asking me about Jesus, the Son of Man? He is seated on the right hand of almighty God and He will come on the clouds of heaven to give judgment and requital”. And they cried “Oh! Oh! The Just one has erred. Let us ambush and overpower him, since he is of no use to us and opposes our works. He has become a chastisement for our thoughts and it is hard for us to look upon him, because his life makes transgressors of others. His paths have radically altered. Stone him, stone him and we shall cast him from the roof”. But the believers were told of these words of their holy preacher and cried aloud: “Hosanna to the Son of David”. They raised their hands to the heavens and gave thanks to the Lord for the witness which this great hierarch had borne to Christ the Messiah. The others then rushed at him and threw him off the roof of the temple, and his legs were badly injured. Struggling to his knees, he imitated Christ and prayed, saying: “God our Father, forgive them, for they know not what they do”. And they began to stone him. One of the priests (Epifanios says it was Symeon the son of Cleopas, but Josephus claims it was one of the sons of Rekab, as is mentioned in chapter thirty-five of Jeremiah) cried out: “Stop! What are you doing? This just man intercedes for us with God and you are stoning him?” Then a dyer cast the mortar he was holding and it struck the saint on the head, killing him. He was buried with great honors, on the Mount of Olives according to some, and his gravestone could still be found there at the time of the Emperor Hadrian’.