The four Evangelists, Matthew, Mark , Luke and John enjoy particular honor in our Church, because they were tasked with writing the four Gospels, which are the four pillars on which are Christian faith is supported, together with the other books of the New Testament and our sacred Tradition. Here we shall be dealing with Saint Luke.

He came from Antioch, in Syria and was of Greek descent. He was very well-educated and a doctor by profession. He spoke excellent Greek, as well as Hebrew. This is clear from his writings- the third Gospel and the Acts of the Apostles- from which it’s clear that no other writer in the New Testament can equal the elegance of his style. He was, at the same time, a talented artist and studied in Athens and Alexandria. 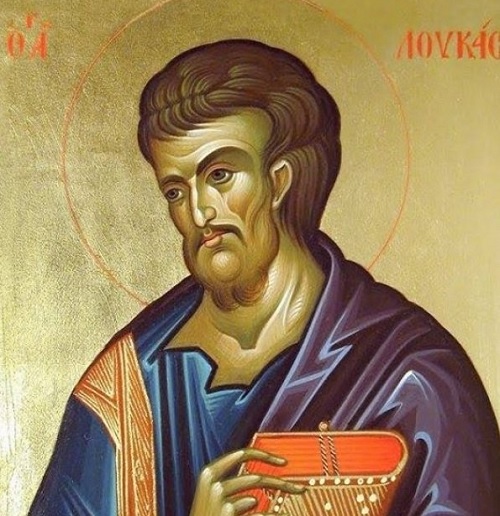 We don’t know much by way of detail concerning his life before he met Saint Paul. We suppose he was a pagan and, it would seem, he came across Christianity in Antioch. Once he’d become acquainted with Saint Paul, he became close to him, remaining a devoted disciple and follower until the latter’s death by martyrdom. He fervently and zealously preached the new, saving faith in Thrace, Macedonia, Thessaly, Achaea, Asia, Cyprus, Illyricum, Judea and Asia Minor, converting multitudes of pagans and Jews to Christianity.

He deemed it important to record what he’d heard about the divine Person and work of the Lord from the holy apostles, Saint Paul, the Mother of God and other witnesses who had seen and heard Christ in the flesh. He did so fifteen years after the Ascension, so that there would be an everlasting written legacy and testimony in the Church of Christ. He therefore wrote what is known to us as the ‘Gospel according to Saint Luke’, the third book in the New Testament. He begins it with the birth of Saint John the Baptist and the Annunciation of the Mother of God. He goes on to describe vividly and precisely the events of the birth of Christ, His ministry, the miracles, His suffering on the Cross and His Resurrection, all with accurate historical references and literary grace. Finally, it was he who recorded the greatest number of Christ’s parables, which he does with incomparable expressiveness.

He also wrote the fifth book in the New Testament, the Acts of the Apostles, that is, the first ecclesiastical history of our Church in which he sets out his own experience of the foundation and growth of the first Church. He begins with the wonderful Divine Ascension, and goes on to describe in detail the miraculous event of Pentecost, the first sermon of Saint Peter and the baptism of three thousand of those attending, and the foundation of the Church. Thereafter he talks about the life of the early Church and the activities of the apostles, devoting the majority of the text to the work of Saint Paul.

The recipient of the two books mentioned is one ‘most excellent’ Theophilus, about whom we know nothing. Doubtless he was some prominent personage who had asked Luke for information about the new faith.

Our venerable tradition states the Luke was also a gifted artist who painted the most holy face of the Mother of God, with whom he lived for quite a long time in Jerusalem. Some famous icons are attributed to him, such as those in the monastery of Spilaiou, Our Lady of Kykkou in Cyprus, and in the town of Vilina in Russia. Other well-known holy icons of the Mother of God are also attributed to Saint Luke.

His missionary activities coincided with the proclamation of the persecutions on the part of the Roman state against the Christians. Seeing the vigor of the new faith, the obscurantist pagan priesthood feared for their unlawful and superstitious interests, and so persuaded the degenerate Romans to launch a harsh persecution against the Christians, supposedly because they were a threat to public order. Thousands of Christians were arrested, with the help of the pagan priests, and were tortured horribly in order to persuade them to sacrifice to the idols. Those who refused were put to death, after enduring unspeakable tortures.

And so, the saint and Evangelist Luke was a marked man for the fanatical pagans. According to the most prevalent tradition, after Saint Paul’s martyr’s death in 68 A.D. Saint Luke went to Greece and settled in Boeotia, where, through his fiery sermons, he converted a host of pagans to the true Christian faith. He also practiced as a doctor, treating patients without remuneration. This upset and angered the pagan priests of the region, who saw their sanctuaries being abandoned. They also suffered loss of earnings from their superstitious practices, such as magic, fortune-telling and the quack remedies which they sold by the score as ‘cures’ to the unfortunate adherents of paganism. So they inflamed the fanatical pagan mob which attacked and arrested Saint Luke. With no regard for his advanced years, they subjected him to inhuman tortures. When he was exhausted, they hanged him from an olive tree, where he rendered his holy soul to God, at the age of eighty.

Christians collected his precious relics and buried them with great honors near Thebes. From his coffin flowed myrrh, which perfumed the air over a large distance. Many miracles also took place there, which resulted in large numbers of pagans becoming Christians. The Byzantine emperor Constans (337-350) transferred the relics to Constantinople, together with those of other apostles and placed them, as precious treasures, in church of the Holy Apostles. They were there until the sack of the city by the Crusaders in 1204, when the invaders stole them and took them to the West*. Today, the sarcophagus of the saint is preserved in a very beautiful church in Boeotia and miracles continue to occur there. His holy memory is celebrated on October 18.

* The body lies in the Abbey of Santa Giustina in Padua and the head in the St. Vitus Cathedral in Prague. A rib was returned to Greece in October 2000, and now lies in his tomb in Thebes [WJL].