The Divine Eucharist according to Saint Nikodimos (1)

The name of Saint Nikodimos is closely associated with the Kollyvades movement on Athos in the late 18th century. The representatives of this movement insisted on a renaissance of the Patristic understanding of Orthodox theology and spirituality. This was to be undertaken in close relation to the liturgical life of the Church.

Saint Nikodimos is one of the most distinguished representatives of the movement, thanks to his literary talent and his encyclopedic knowledge, which enabled him to refer to the works of the Fathers with complete accuracy. Encouraged by his spiritual brethren, Nikodimos meticulously made collections of Philokalic texts and edited older spiritual writings, translating them into a more modern Greek idiom.

One of his best-known books is ‘On Frequent Holy Communion’. The matter of frequent partaking of Holy Communion was one of the most burning issues of the movement of the Kollyvades Fathers. In the 18th century, the overwhelming majority of the faithful took communion only once a year, while the monks on Athos did so once every forty days. The Kollyvades realized that this practice was equivalent to a departure from the tradition of the Orthodox Church. They were thus prepared for conflict with the Church hierarchy in order to contribute to a return to the ancient and Patristic practice of frequent communion. 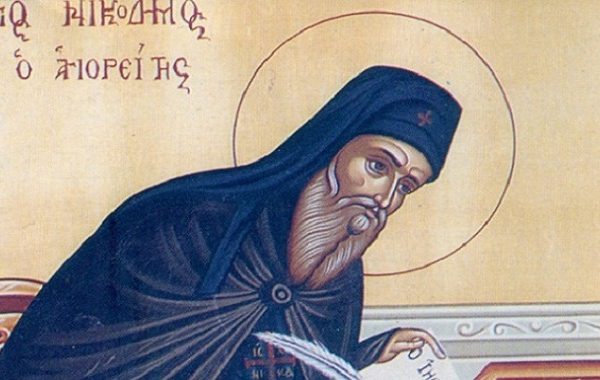 The book ‘On Frequent Holy Communion’ was first published in Venice, anonymously, in 1783, with the financial support of the Italian, Antonio Bartolli. The book bears the characteristic stamp of Saint Nikodimos, but he collaborated on it with Saint Makarios Notaras, Bishop of Corinth. The book was published a number of times in the 19th and 20th centuries, under the name of Saint Nikodimos. The most recent editions have been in Volos in 1971 and Athens in 1991. The publishing house ‘Myriobiblos’ printed a version in Modern Greek in 2004 and 2006.

Basic Themes of the Book
A. Saint Nikodimos’ first concern is an explanation of the Lord’s prayer, ‘Our Father’ which is clearly of a Eucharistic nature. The ‘Our Father’ is divided into three parts: a) praise of God; b) thanks to God for His good gifts; c) prayers for the forgiveness of our sins and other entreaties, seven in all.

In his explanation, he draws particular attention to the request for our daily* bread: ‘give us today our daily bread’. It is obvious that he views the prayer as preparation for the Holy Eucharist. In this instance he bases his case on a generally-accepted understanding of this request: we’re asking God for our nourishment, that which sustains our bodies, not some excess of foodstuffs, and the secular prosperity this would entail. Saint Nikodimos reminds his readers ‘not to lay up treasures on earth’.

According to Saint Nikodimos, ‘our daily bread’ has another meaning, which reflects the words of the Lord as recorded in the Gospel: ‘people do not live by bread alone, but by every word which proceeds from the mouth of God’.

The spiritual significance of the expression ‘daily bread’ is explained in one passage: ‘The divine word, the whole of the Old and New Testaments, presents the teaching concerning the Holy Spirit. The holy Fathers of the Church draw cold water from Scripture as if from a spring, in order to formulate their God-inspired teaching and unite us with it. This is why we accept their teaching and writings as our “daily bread”. Otherwise, our soul would die of hunger, since it would be lacking the word of life. It would die even before it suffered the death of the body, just as Adam died when he transgressed against God’s commandments’.
Saint Nikodimos gave another explanation of the same expression. According to him, ‘daily’ means the body and blood of Christ. He validates his view by referencing many passages in the works of the Fathers of the Church. Among these are the words of Saint John the Damascan: ‘The phrase “our daily bread” means the existence of bread in the future ages, that is, the bread which nourishes our body. In other words, “daily bread” indicates the body of the Lord’. When the holy Fathers mention ‘daily bread’, they don’t deny the importance of ordinary bread as regards satisfying the body. But for Christians, spiritual nourishment is also very important ‘so that they may live a spiritual life and remain immune to the poison of the devil. If Adam hadn’t eaten of the bread of the devil, he wouldn’t have died, either spiritually or bodily’.

* One of the great bones of contention in Biblical scholarship. Presumably, Christ would have transmitted the prayer to His disciples in Hebrew or Aramaic, so we don’t know what word He actually used here. The Greek means something like ‘of the essence’ and it was translated thus into Slavonic – ‘nasushni – which probably meant very little to most Slavs at the time but has now come to mean ‘vital’ or ‘essential’. The English version seems to have been translated from the Latin ‘quotidianum’, meaning ‘daily’. There are a number of outlandish theories which try to make the Greek word somehow fit into ‘daily’ (including one which is the equivalent of confusing ‘armful’ and ‘harmful’ in English), but in the end ‘daily’ is a perfectly good translation of the sense of the Greek and is a great improvement on ‘that bread which we cannot do without’. But in the context of Saint Nikodimos’ commentary, we should bear in mind the sense of ‘essential’. [WJL]