Address on the Feast of Our Most Holy Lady – 1

Address on the Feast of Our Most Holy Lady the Mother of God, when she was taken by her Parents to the Temple

All too often the “remembrance of the righteous which is accompanied by encomia” is an opportunity to censure the person praising if he falls short of expressing the worth of the person being praised- because the address is not always, nor in all circumstances, equivalent to reality. But how can I speak of the Mistress of all the righteous, the Mother of God Who is the King of Righteousness, or touch very lightly on even a part of her real worth, since it is my intention to praise her memory? I think that if there were angelic voices who really were the heralds of certain mysteries, even they would not be able reach the sublime grace of the Mother of God. No human person could ever, in a fitting manner, hymn the praises of her whose saintliness surpassed the whole of creation. Shall we then keep silent and dismiss the Mother of God without further ado, though for us she is the underlying cause of reasoning life, or shall we speak with whatever power we may command? […]

The entry of the Mother of God into this present life is richly adorned with divine grace, to the extent that the end which was to come about would be of the same import. She was endowed with all the virtues, superior to all created things, descended from a royal race, i.e. the tribe of Judah, born of parents who were also of noble lineage and even nobler piety and she was, indeed, a gift to them from God. Regard, however, the purpose of God. They were without reproach all their lives but were in danger of being unable to live down the shame of being childless.

This may have been because God wished to test their faith, just as He had done with the Forefather Abraham (since it is God’s wont to settle a heavier burden on those who are strongest, that, in the end, they may be crowned more brilliantly for their faith and be a comfort to the people who will succeed them) or because He wished to show them something more arcane, more symbolic. Because, whatever way we look at the matter, their hearts were overshadowed by the recollection of their lack of children and they were greatly distressed by it. In particular, the heart of the blessed Ann was pierced as it were with a sword, being a woman. They are more sensitive beings, more susceptible to sorrow and more generous of their efforts.

So what did they do? They did not have recourse to doctors, they did not burden themselves with amulets, seek a medicinal aid to pregnancy, or go to sorcerers. All of these options are indicative of people who really are sick, whose souls have been devoured by lack of faith and have fallen into the hidden snares of the Evil One. But Joachim and Ann were not like that. They turned their attention to the Creator of the universe, to Him Who fashioned men and women and multiplied them, Who brought to life the dead womb of Sarah.

They began to fast and to try to attract divine goodness through prayer, to bring to His mind all the ancient miracles which the wives of the Patriarchs enjoyed, the Shunnamite woman, Hannah, the mother of the Prophet Samuel. “They sowed and reaped in joy”. Joachim and Ann were worn down, but were transformed and acquired a daughter, who surpassed them in sanctity and divine grace, since God dwelt to a greater extent in her than in them. God simply dwelt within them, according to the saying: “I shall dwell among them and walk with them”, but He actually filled the womb of their daughter. 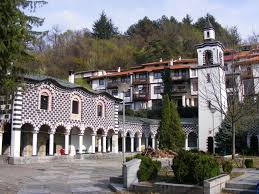 Church of Our Most Holy Lady’s Entry at Blagoevgrad

Did they disdain divine grace? Did they imitate timid parents and keep their daughter at home and give her a gentle upbringing, in the hope that she would look after them in their old age, as their heiress and successor? They would not have been her true parents, nor would they have been worthy to bear her at all if they had thought like that. With the assistance of the Holy Spirit, they were alienated from any corporeal behaviour, they exhibited a superior attitude, they handed back to God the gift He had given them and thus demonstrated that they realized that the blessing that had befallen them was in His gift and that they were returning it to Him. In the Temple, they presented the Lord with an offering who lived and moved and brought added beauty. The locus of the temple was chosen as the dwelling-place of glory, which for David was a “consummation devoutly to be wished”, but which he was not permitted to see with his own eyes. And the little girl forgot her family house and was taken to the King Who desired her beauty.

She was taken of her own free will, with honour and glory. She left her house in a splendid procession, with everyone applauding her exit. All their relatives, friends and neighbours accompanied her parents. Fathers gladly went along with the father and mothers with the mother. Girls and maidens holding candles walked alongside the handmaid of God, like a circle of bright stars around the moon. The whole of Jerusalem learned of the event and followed this unprecedented occasion, i.e. a little girl of three years old surrounded by so much glory, being honoured with such a great torchlight procession. When they arrived at the Temple, the whole order of the clergy was waiting for them and welcomed them with psalms, with the High Priest himself visibly moved by this wonder- more than anyone else, in fact, since he was divinely inspired.

The parents took their daughter to him, entrusted her to him and told him the story of Ann’s sterility, the promise they made, and acknowledged that her upbringing was now more than they could manage. Because she was so beloved of God, her upbringing had to be commensurate, so that a pearl so precious and rare should not be sewn onto cheap and inferior cloth, but onto royal raiment that would be its setting and background.

At that moment, the High Priest fell into something like ecstasy; he was possessed by the Spirit of God and had the insight that the maiden was indeed the dwelling-place of divine grace and that she, rather than him, was worthy to appear constantly before God. What is apposite here is what was said in the Law, with profound significance, about the ark of the covenant: that it would reside in the Holy of Holies. Clearly this really refers to this young maiden. Without reservation and without fear, the High Priest undertook something entirely just, which transcended the Law, or rather the human Law and the lack of clarity of the letter of the Law, because he followed the Holy Spirit and led this offering into the Holy of Holies and left her there.

This place received the maiden, a place which other people had not even seen, which the priests themselves did not enter, except the High Priest and that only once a year. Of course, it was only proper that she should not slavishly follow the precepts of the Law, because, by her purity, she had been sanctified to a greater extent than the whole of creation and had been justified from the time she was in her mother’s womb. The Law had been put into place not for the righteous but for sinners. The Law was established with an eye to transgressions and was an instructor for those who needed correction. For her who surpassed the angels, it was not the Law but the grace of God which wrought perfection. God showed that He was pleased with what had happened, because He sent an angel as a servant to nourish the oblate child who would give birth to Him and rear Him, so that no characteristic of hers would seem human, but rather that in everything she would appear divine […].