Is it backward to believe that sicknesses aren’t transmitted by Holy Communion?

We’ve reached the point, and it really is dumbfounding, where, in our country [Greece], voices which openly cast doubt on the sanctity of the sacraments, particularly Holy Communion, have found a platform. We now all understand that everything has to pass the test of ‘reason’ and technology. There’s only mathematics and experimentation. Only what can be proved. So, since God can’t be seen, He doesn’t exist. Because I see only bread and wine at Holy Communion, I can’t accept any miracle regarding their transformation into the Body and Blood of Christ. 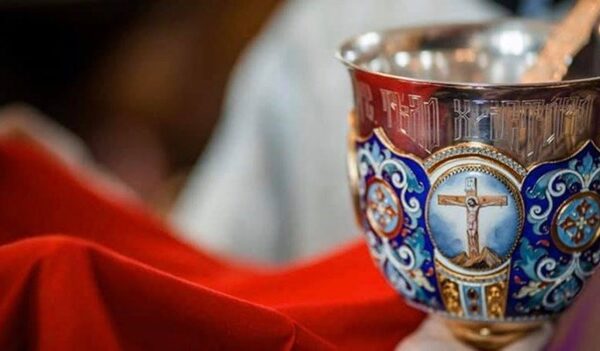 This is what the mass media is telling us and if you say differently, you’re backward and living in the Middle Ages. Even if it’s not ‘Church’ people who are saying it, but a distinguished scientist, a woman who’s a university professor. The truth will be buried because it’s troublesome; it mustn’t be heard. Whoever says something other than what they, the media, want will be ‘cancelled’. Seriously, what kind of democracy and freedom is being served by this? Where’s the respect for diversity which, we’re told so forcefully, we ought to embrace, particularly these days? Have things reached an extreme, though ‘extremes’ are otherwise condemned?

So this new virus has turned everything upside down and if it spreads even further, we’ll be in an even worse state. The issue of the virus will cause us to reaffirm our attitude to, and view of, life in general. The faith of many people will be tested. It’ll become a case of the manifestation of the truth that: ‘where sin increased, grace increased all the more’ [Rom. 5, 20]. And what we encounter in Biblical history will also be shown to be true: that, whatever happens, there will always be a ‘faithful remnant’ within society who will hold fast to the truths in which they believe and by which they live.

They will be few, as they’ve always been during great crises and difficulties, but they’ve always been there and always will be. They’ll be people who confess their faith discreetly, who don’t push themselves forward, who don’t show off, don’t seek praise. They’ll be people who keep themselves to themselves, but who will make their appearance when it’s necessary, when they’re ‘called’. Some of these will be ‘nocturnal disciples of the Master’. In a short while we’ll be hearing again: ‘The disciples lost their courage, but Joseph from Arimathea boldly…’ [Sunday of the Myrrh-Bearing Women]’ Crypto-Christians will appear from places where they were least expected and will make a public confession of Christ. Then it will also be true that even if people are silent, the stones will cry out [Luke 19, 40].