The Angel from Antioch: Metropolitan Pavlos of Aleppo

The history of the human race testifies to the presence of billions of people on the earth who have left no trace or mark behind them, but were simply passing through this life. Metropolitan Pavlos wasn’t content to be a mere passer-by or one more lost voice in the hustle and bustle of the city. His voice reached us as a cooling breeze, sweetening and gladdening our souls, calming the city and halting its tumult, as the Holy Spirit spoke within him and through him, in such a way that all the generations of Antioch will remember him every time the Word of God is preached. 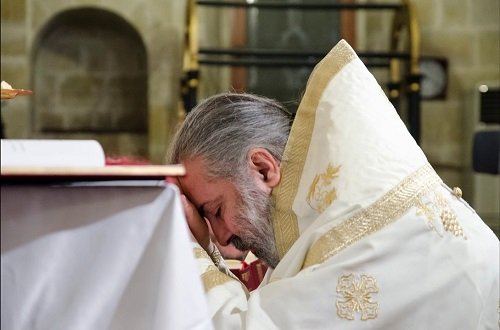 I love talking about my beloved father in God, Metropolitan Pavlos Yazigi, a pure man with a humble heart. By the word ‘father’, I mean that I was reborn in Christ because of him. He brought me out of the old world into the new, even though I don’t feel I’m worthy to be his spiritual child, because of the enormous spiritual gulf that separates us and since I believe that our Metropolitan is a peak that is difficult for anyone else to reach.

This man of God was born in Laodicea in the year 1959 and grew up in the bosom of the Church, while he also completed his studies at the National Technical University of Athens. His love for our Lord Jesus Christ and His merciful mother Our Most Holy Lady and Ever-Virgin Mary grew increasingly fervent, so much so that he was moved to go to the Bower of the Mother of God (the Holy Mountain on the Athos peninsula, in Greece, is also called the ‘Bower of the Mother of God’) with the blessing of the Angel of Laodicea, Metropolitan Ioannis Mansour, who ordained him priest in 1992 and archimandrite in 1994.

On the Holy Mountain he found what his soul was seeking and it became his refuge for as long as he lived in Greece. One of the most important kellia on the Holy Mountain was that of Saint Nikolaos Bourazeris, which accepted him as one of its children. It was there that, in essence, he learned the principles of asceticism as a whole, starting with holy obedience and unceasing prayer and attaining the truly humble way of life and self-sacrifice in the service of others.

His spiritual reference point was Elder Kyrillos, the head of the Brotherhood of Saint Nikolaos Bourazeris, an ascetic priest who spent his life in prayer, the spiritual struggle and the study of holy books. It was from Elder Kyrillos that he had the blessing to gather spiritual nectar from many of the fathers, such as Saint Païsios the Athonite (canonized as a saint in 2015 by the Ecumenical Patriarchate. He is commemorated in the Orthodox Church on 12 July. He fell asleep in the Lord in 1994), Elder Parthenios, the Abbot of the Monastery of Saint Paul), Elder Isaak Atallas (an Elder with Lebanese roots who lived in the Kelli of the Resurrection at Kapsala. He translated many books and was a spiritual son of Saint Païsios), Elder Polykarpos (a great spiritual father who founded many monasteries inside and outside Greece) as well as many other great spiritual fathers, both on the Holy Mountain and outside. 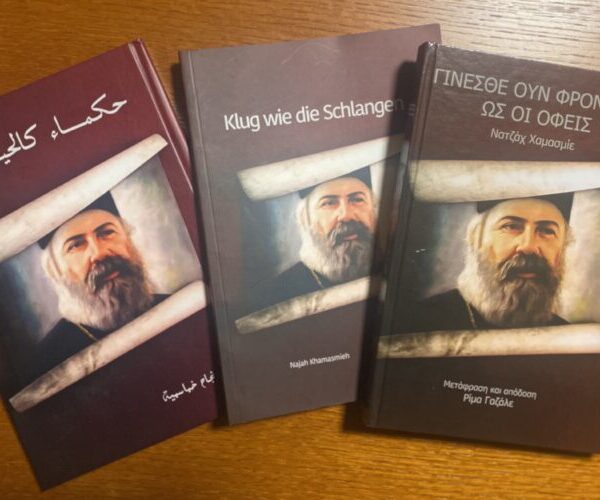 He was proclaimed Doctor of Theology by the Aristotle University of Thessaloniki for his thesis on Saint John Chrysostom (Eschatology and Ethics according to Saint John Chrysostom). Then, in 1992, he returned to Syria, taking with him the invaluable Athonite spiritual experience and asceticism.

Following his return to Laodicea, he was appointed priest in the church of Saint Andrew and then archimandrite in the cathedral church of Saint George. He was constantly active in both churches, and at that period also taught as an associate professor at the Theological School in Balmand. That’s when my association with him began. He was later sent to Lebanon and appointed Dean of the Theological School at Balmand (from 1994-2001) and, simultaneously, Abbot of the Holy Monastery of Our Lady, also in Balmand. He was our teacher of love in Christ, in patience and humility. We realized this every time we saw him facing difficulties calmly and peacefully and also every time he refused to allow us to come up with excuses, that is, to defend ourselves or even him personally. He would always repeat his well-known phrase: ‘Better to observe yourselves and discover your own personal inadequacies, weaknesses and passions. Take care always to reform yourselves and don’t waste precious, God-given time on idle talk and excuses’. He would go on to say that, as Christians, we are obliged ‘to love one another’, ‘always to respect the image of God in each person and always to dwell only on the positive aspects’. He would finish by saying: ‘Everybody’s free to speak, but don’t you pay attention to what each one’s saying. Think only about the word of God and keep our crucified Lord always in your mind and heart. He is our aim, because after the Passion and the Crucifixion comes the Resurrection. Deny yourselves, take up your cross and follow the Lord, the Almighty’. This is how he taught us all those years and even though his trials multiplied, his love also increased all the more. He was prudent, wise and patient towards everyone, without exception- from his spiritual children to every person he came across. 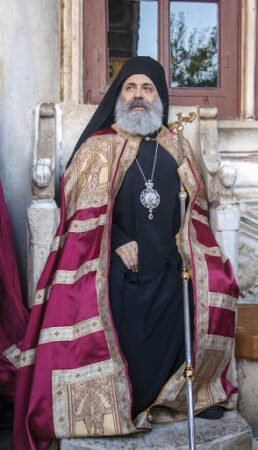 As regards the monastery’s program, he obliged students at the Ecclesiastical Seminar (junior high school) to live there for at least a year so as to learn the meaning of the spiritual life, that is, theology in practice, before beginning their studies in theology as theory. This was so that they would be properly prepared for their future role as priests.

For all those years he was custodian of both the monastery and the theological school. He improved, renovated and repaired many parts of these institutions, and left his mark on both, as all those who worked with him testify. And since he was faithful in the small things, God entrusted him with greater ones. Thus, in 2000, the Holy Synod elected him Metropolitan of Aleppo and Alexandretta. He thus ascended another step in the hierarchy and new horizons opened before him, as he began his task from absolute scratch.

He brought new life to the Church in Aleppo and Alexandretta with his powerful spirit, which he had developed in the Bower of the Mother of God. He began so quietly and wisely that many people were unaware of him in the beginning. But as the years went by, the more they saw and were dazzled by the success of our Orthodox Church in Aleppo and Alexandretta. In his time, the Church grew in an indescribable manner, starting with its restoration and organization and including the establishment of a model Orthodox school, which surpassed many of the most important schools in Aleppo. He also founded the Monastery of the Evangelistria, which numbered in its ranks nuns with a rich spiritual life and an abundance of virtues.

As well as this, he also ordained many priests who were well trained academically and theologically and who had pastoral abilities. This is borne out by the fact that many of them went on to be Metropolitans or Abbots of monasteries in their own right.

He founded a good number of social institutions in Aleppo to assist the poor, the disabled, the indigent and those in need. He gave new life to the teaching of the Scriptures and imbued it with a different spiritual aura on all levels, starting with the young and going on to adults in Aleppo and its province (Idlib and Al Taqbah), as well as in Alexandretta. The same was true of the Scouts and their important role in the Church.

He founded the private ‘Anatoli’ school, on Europeans models, after an endowment from the Greek Church, which entrusted him with this task. The foundation stone was actually laid by the late Archbishop Christodoulos of Athens and All Greece (he laid the stone in 2003 and departed this life in 2008). This school became a beacon of learning, since subjects were taught in Greek, English and French, as also was the curriculum of the state of Syria, which was taught in Arabic. Children and young people from the metropolis studied there, beginning with Kindergarten and going on to 12th grade. 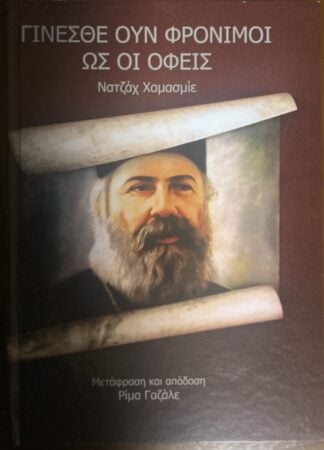 Metropolitan Pavlos wrote many theological and spiritual works aimed at assisting contemporary Christians. He also preached many important sermons from the pulpit (Metropolitan Ioannis Mansour called him ‘the new Chrysostom’), published a large number of articles and made many noteworthy translations.

Our Metropolitan understood the importance of technology and used it in the service of the Church and of young people, setting up pioneering ecclesiastical webpages.

He’s a man who wrote history, a man of God, devoted to our Savior Jesus Christ. Precisely because he loved God from the depths of his heart and soul, he was also able to love his neighbor so much. He’s a true defender of justice, wherever and when he’s been needed, and this why he was kidnapped on 22 April, 2013. Since then, unfortunately he’s been missing.

I beg God to heed his prayers for us, wherever he is, and also to receive our own humble prayers for him.

In conclusion, whatever I say, however I describe this angel, there are no words to render him his proper due. The tongue becomes tied and the words are lost that might justify him. Suffice it to say that my own spiritual father was the father of all of us.

Elder of the Kelli of Saint Prokopios, Holy and Great Monastery of Vatopaidi,