The life of Saint Arsenios the Cappadocian – 1

The most Blessed Father Arsenios was born around 1840 in Pharasa or Varasio, the most important of the six Christian villages in the Pharasa region of Cappadocia. 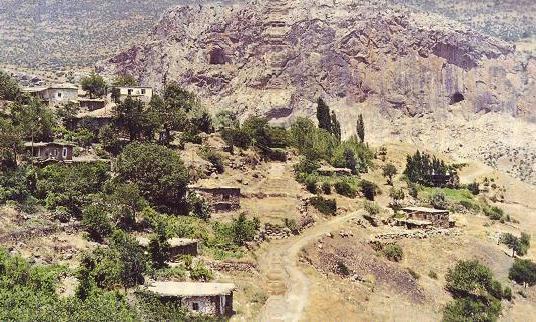 The now emptied village of Pharasa

His parents were rich in virtues, and rather mod­est in material possessions. His father was a teacher whose name was Eleftherios (or Hadjilefteris). His sur­name was Annitsalichos and his nick-name Artzidis. His mother was called Varvara, her maiden name was Frangou or Frangopoulou and the nick-name of her family was Tsaparis.

They had two sons, Vlasios and Theodoros (Fath­er Arsenios), who were left orphans at an early age when both of their parents passed away, first the fath­er and shortly thereafter the mother. The orphans were then cared for by their mother’s sister, who lived in Pharasa.

One day, Vlasios persuaded his younger brother, Theodoros, to go with him to a field which belonged to their father, which lay close to a torrent called the Evkasis. As they were crossing this torrent, the water carried Theodoros away, and Vlasios, in tears, called on Saint George, whose Chapel was close by. While Vlasios was crying and asking the Saint to help, because his conscience was troubled for having put his brother in danger, he suddenly saw Theodoros next to him, joyfully telling him how a horseman, dressed like a monk, had hauled him out of the water, set him on his horse and brought him out of the torrent.  From then on, Theodoros maintained that he, too, was going to become a monk.  In this way God saw to it that he would take the right road from an early age. This event had its effect on Vlasios, as well, who in his own way, also gave himself to God, by glorifying Him as a teacher of Byzantine Music. He later came to live in Constantinople. 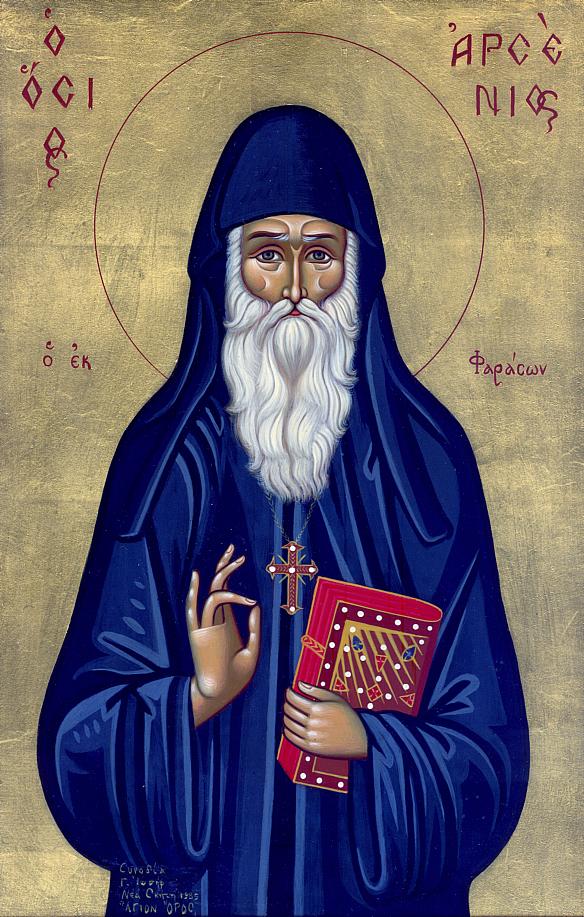 When Theodoros was a bit older, he was sent by his aunt in Pharasa to be educated in Nigde. His fath­er’s sister, a teacher, was also living there and she was to look after him.When Theodoros had completed his studies in Nigde, his aunt, the teacher, seeing how in­telligent he was, arranged with relatives in Smyrna to help him continue his higher education there.

Whenever Theodoros came back to Pharasa dur­ing school breaks, he would gather the children in his father’s house and teach them what he himself knew of reading and writing. He was strict with them so they would not misbehave. The children were rather disor­derly, because the only time they ever saw a teacher was once in a blue moon. Whereas Theodoros came back home during the school break to rest, he found his “rest” teaching the children to read and write us­ing the Church texts.

Once, however, on his return to Pharasa, he stay­ed for only a few days unfortunately, because his aunt wanted to keep him in the village and get him married. She had, in fact, been match-making, without his knowledge.

One day, his aunt said to him: “I suggested to Ambaroglis’ daughter, Vasiliki, that you and she getmarried, but she rejected the idea. She responded, ‘Theodoros is all right, from a good family and well-educated, but he’s a monk! Do you want me to marry a monk?’ “

When Theodoros heard this, he was very upset with his aunt and said to her with a hurt tone of voice: “Look here, Aunt, even strangers have realised that I’m going to be a monk. Why haven’t you yet?”

Theodoros lost no time and left for Smyrna the next day. In Smyrna, apart from Greek and Church Studies, he also learned Armenian, Turkish and a little French. After completing his studies in Smyrna, he returned to Pharasa, said farewell to his aunt there and to the other in Nigde and then went off to Caesarea. He was about twenty-six years old when he entered the Holy Monastery of the Flavians (Zindzi-Dere), dedicated to Saint John the Baptist, where he was tonsured and given his new name, Arsenios.

Father Arsenios, unfortunately, did not enjoy his tranquillity for long, because there was a great need for teachers at that ti me, and the Metropolitan of Caesarea, Paisios II, who was still alive, according to Kortsinoglou, ordained him deacon and sent him to Pharasa, to teach reading and writing to the aban­doned children.

So Deacon Arsenios returned to his home village and began with divine zeal the work of dispelling the darkness of illiteracy. The cause of this darkness was, of course, the ever present pressure of the Turks, who looked upon these six Christian villages of Pharasa, constituting a small Greek enclave, with an envious and evil eye. 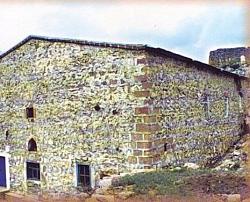 The Church in Pharasa where Saint Arsenios used to serve

For this reason he went about his work in an unassuming fashion and with great discernment, despite the fact that he was so young. He had prepared a room as a school and, instead of desks, had long­haired goatskins or sheepskins, for the children to kneel on and to follow the lessons.

In this rather sagacious manner he avoided provoking the Turks, and even when they happened to see the children, they simply assumed they were praying. Many times Father Arsenios would gather the children in the Chapel of Panaghia (so Kantzi, meaning on the Crag in the Pharasiotic dialect), which was located high up on a cliff in a cave and was used as a Secret School.

Deacon Arsenios continued this practice later on as well, always remaining wary of the Turks, despite the fact that Christians had been given some relative freedom then because of the pressure which Orthodox Russia was able to bring to bear on the Turks. But there was always this same fear in Pharasa, because of its remote location in the depths of Cappadocia.

Until about the thirtieth year of his life, he taught as a deacon. He was then ordained a priest in Caesarea, with the title of archimandrite and the blessing to act as spiritual Father. After his ordination, he first went from Caesarea on a pilgrimage to the Holy Land and then returned to Pharasa. From then on, the Pharasiotes called him Hadjiephentis.

His spirituall activity now began to intensify and spread. He even went about seeking contributions in nearby villages and distant towns. His main purpose for money collections, however, was to come into contact with the Greek Christians who lived in villages alongside Turks, and to boost their morale in those difficult times.

What was of greater help in giving the frightened Christians the strength to remain firm in their faith, was not only his encouraging words, but also the wondrous works which they saw Father Arsenios performing, because he had an abundance of God’s Grace with which to heal the souls and bodies of the suffering people. When the Christians saw these things, they believed more strongly, because they saw the great power of our faith. As for the Turks, who also saw these works, while they did not actually become Christians they did at least become rather less harsh in their treatment of the Christians.

It is true that, wherever Father Arsenios went and sick people were brought to him for prayers to be read over them, he never asked whether they were Christian or Turk, but only what they were suffering from so that he could find the appropriate prayer. When he cured the sick, by the Grace of God, Father Arsenios helped the Turks understand the enormous value of our Orthodox faith and to revere it…..

Hadjiephentis would naturally become very tired by these many difficult responsibilities which he had undertaken: teaching the children the sacred writings of the Church, going on pastoral journeys near and far, without neglecting to perform his ongoing clerical and monastic duties. He felt consoled and rested, however, whenever he saw others being comforted and helped. He had great lovee for God and for His image, Man, but not for himself. For whenever he saw a lot of pain and Turkish oppression, his love would lead him out of himself and out of his village to embrace even the surrounding villages….

Father Arsenios was most sensitive to the spirit of Orthodoxy and was profoundly aware of his great responsibility towards his flock and was vigilant in protecting the people. This included saving them from those wolves in sheep’s clothing, the Protestants, who were at that time spreading propaganda in the East through the teachers sent to proselytize. For this reason, Father Arsenios found it necessary to select three assistant teachers for the school from among those who were the best educated in the village, and not to accept anyone from outside. While the great fear initially was of the Turks, and the school functioned as a Secret School, later on, there was more reason to fear the Protestants, for they sought to taint the Orthodox faith of the children….

Father Arsenios taught the boys in the manner of those times. He also introduced certain spiritual exercises to the boys to increase their manly virtues of courage and strength, but at the same time to humble their passions. Sometimes he was also forced to expel some boys from the school, who were much older than the others and who carried weapons and were disobedient. This is why he was obliged not to accept girls at the school and would say, “Let the girls learn the lessons to do with the home” …

The Pharasiotes, and even those from the surround­ing villages, all adored Hadjiephentis, except for a few drunkards and idlers, because he never wanted to see the able-bodied sitting around. In Pharasa, moreover, besides the fact that they carried weapons, they also had access to plenty of wine, and this occasionally caused serious incidents with misunderstandings and broken heads which often required medical attention. In Pharasa, however, and in the entire region, there was no doctor to be found, except Father Arsenios himself, who was both teacher and doctor of souls and bodies. He did not, of course, give medical prescriptions to the sick, but he would read an appropriate prayer for them and they would recover.

Whenever someone was sick and could not be brought to the Father’s cell, either because he was very seriously ill or because the distance was too great, they would send him an article of clothing belonging to the sick person. Hadjiephentis would read the ap­propriate prayer over it and return it. The sick person would then wear it wi th faith and reverence and be healed. Very often, to set their minds at rest, he would also send them the prayer, written on a piece of paper, which they would then wear folded as a phylakton.

Since the illnesses were many and varied, and Hadjiephentis could not always find a corresponding prayer for each, he would take the book of Psalms and use those as well. He would read the Gospel usually in only very serious cases, such as for the blind, the mute, the paralysed .and the possessed.  When he saw someone physically ill, who was also spiritually sick, he did not heal him at once, but gradually, that is, he told him to come again and again, until he had healed him spiritually, and only then did he also miraculously make him physically well with the final prayer. Naturally, Father Arsenios never accepted money; neither would he lay his hands on it. He used to say, “Our faith is not for sale” …

He would also not accept gifts…

Naturally, Father Arsenios was very pleased when people blamed him unfairly. This helped him greatly, since he himself often deliberately pretended to be idiosyncratic and strange so that he could avoid being praised by people…