The Parable of the Rich Man and Lazarus (3)

Sixth. While Lazarus was in the bosom of Abraham, the rich man was burning in hades. Indeed, he would beg Abraham to send Lazarus to cool his tongue, because ‘I am in agony in this flame’.

The place the rich man is in is hades, not hell. Hell begins after Christ’s Second Coming and the Judgement. After their separation from the body, the souls of sinners dwell in hades. According to the teachings of the Holy Fathers, hades is a spiritual location, a foretaste of hell, when people will endure God’s energy as fire.

There were lengthy discussion on these issues at the Council of Ferrara-Florence, and the revealing views and teaching of Saint Mark of Ephesus have survived. The fire in which the rich man was burning wasn’t the so-called fire of purgatory of the Latins, through which the souls of all humankind pass. It wasn’t created fire, but uncreated. In other words, sinners also receive the rays of divine light, but, because they died without repentance, without being healed, they experience this light as fire. So, depending on their degree of health or sickness, people receive the same Grace as either light or fire. 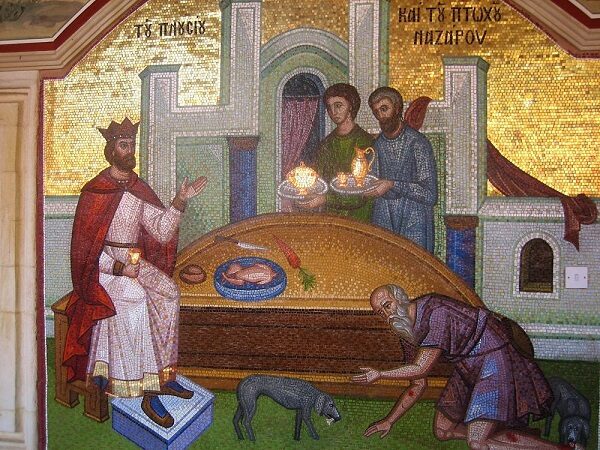 It ought also to be noted that the rich man saw Abraham with Lazarus in his bosom, he saw the glory of Abraham, but had no part in it. Lazarus, on the other hand, both saw the glory and participated in it. This is a very important point, because it shows that in the next life everyone will see God, but only the righteous will have communion and participation. The unrighteous won’t. A characteristic example is Christ’s description of the Judgement: everyone will see the Judge, everyone will talk to Him, but some will enjoy His glory and others will experience the energy of Divine Grace as fire.

Seventh. The rich man was interested in his brothers living in the world, and asked Abraham to send Lazarus to tell them to repent. Therefore, despite the separation of our soul from this world, there’s still knowledge and communication; interest is still expressed.

Together with other features, this demonstrates what we said earlier: that the parable of the rich man and Lazarus doesn’t have to do with life after Christ’s Second Coming, but is concerned with life after death and before the Second Coming. Clearly this is the midway state of the souls.

The saints are interested in the salvation of the world. By God’s Grace, they hear our prayers and bring them before God. This is why we pray to them. Through the feasts we’ve established in their memory, we show that they’re saints, that they’ve been united to God, that they’re awaiting the resurrection of the bodies and that, with their incorruption, they’re enjoying a prelude of the future age. We’re also interested in those who’ve fallen asleep. We pray to the saints that they’ll pray to God for us, and at the same time we pray for mercy for all the departed. Apart from the fact that this is an example of communication between us, it’s also an expression of something deeper.

According to the teaching of the Holy Fathers, when we begin to repent, to enter the arena of purification, it’s a process of constant development. It’s perfection over time, both in the midway condition of the souls as well as in the life after the Second Coming. The degrees of the spiritual life are purification, enlightenment and deification. Of course, these shouldn’t be understood as hermetically sealed states, but as participation in God’s Grace. If we strive to become cleansed, then the Grace of God which purifies us is called cathartic energy. When our nous is enlightened, it means that it receives the energy of God which is enlightening it and this is called enlightening energy. And when we’re deified, this is through God’s Grace and is called deifying energy. The progression is continuous. So all those who repent before their soul leaves the body continue to grow and become more able to accept uncreated Grace. This is why we have memorial services and why we pray for the departed.

But those who don’t repent before the soul leaves the body, since they have no spiritual vision, experience the energy of God only as fire and, of course, never have any prospect of participation in what is good. But we still pray for everyone, because we don’t know their inner spiritual state.