The perquisite for approaching God the inaccessible is the knowledge that it is impossible for us to reach and know Him via the intellectual route. God is inaccessible in His essence, but, despite this, is known and revealed to us through His uncreated energies. We do not understand God; we experience Him. The path which leads to Him is empirical, it is a progression which has deification as its destination. In this way, through the non-rational, we are arrive at God’s glorification.

God is inaccessible, then, in His essence. He is accessible to us, however, through His energy: through His uncreated energies by which He is revealed to us. In reality, there is no contradiction but rather a dialectical synthesis. 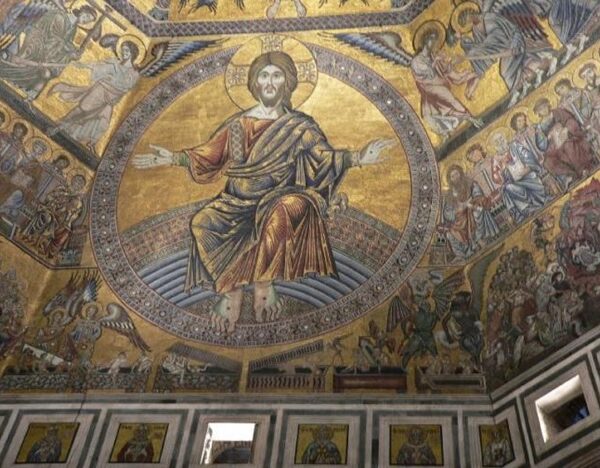 We begin with the question: ‘What is God?’ God is, by definition, completely inaccessible. It is an utterly senseless question to ask what God is. It has no meaning, since God is that which we cannot ask about, which we cannot define, because He simply is. God is being. This is why He is beyond our understanding. When Moses asked God at the bush in flames: ‘Who shall I say I have these commandments from? What’s your name?’, he received the reply ‘I am who I am’, Ehyeh ašer ehyeh (Ex. 3, 14). This was translated in the Septuagint as ‘I am the being’. This ‘the being’, the one who exists, transmits the meaning somewhat of the Yahweh (Ehyeh) of the Hebrew text. So Yahweh means ‘I am’. When in Holy Scripture, in the New Testament- and in particular the Gospel according to Saint John- Christ says the words ‘I am’, this is Yahweh. It was John’s purpose to demonstrate that Jesus is Yahweh. Each of the Evangelists had a particular theological aim and this was John’s. Whenever Jesus said ‘I am’, He meant that He is Yahweh, which is why John writes: ‘I am the way, truth, life’; ‘I am the light of the world’; ‘I am the gate’…

Christ, then, is the Word of Yahweh, He is the person through Whom Yahweh is revealed. Christ is the revelation of Yahweh, through Whom we can go to Yahweh: ‘I am the gate’; ‘I am the way’; ‘that you may know that I am’. Unless you know, you cannot interpret this ‘I am the being’. When the soldiers went to the garden of Gethsemane to arrest Jesus He asked them: ‘Who are you looking for?’ When they replied ‘Jesus the Nazarene’, He said ‘I am’ [i.e. ‘I am he’. The ‘he’ is redundant in Greek]. When they heard this ‘I am’, the members of the arrest party went backward and fell to the ground, as if they had been pushed by a great force, because they had heard the phrase which no-one could say. When Jesus said to them: ‘I am’, He was really saying: ‘I am Yahweh’. This is the essence of the revelation of God.

To be able to speak about God, to understand each other, we use two ways. One is the apophatic, that is awareness that we know nothing about God. God is invisible, inconceivable, unfathomable. All of this is the apophatic way [via negativa]. By saying that God is invisible, impalpable, inaccessible, in fact we are saying what He is not. We say what He is by saying what He is not. The other way is cataphatic [via positiva]. We say God is just, or, in the prayer in the Divine Liturgy (‘For you are God ineffable, incomprehensible, invisible, inconceivable…’, ‘ever existing, eternally the same’. Here we are speaking cataphatically. But even when we talk cataphatically about God, we still are not saying anything about His essence. We say things about God’s properties: ‘what is God’s has been formed from what is ours’. We exist in time, God is ever existing; we change, God is eternally the same. All of this, the cataphatic way, still does not tell us what God is. In the 1st Epistle to Timothy, chapter 6, God ‘alone is immortal and dwells in unapproachable light’. We have already seen this unapproachable light which ‘no-one has seen nor is able to see’ (John Chrysostom). But He ‘dwells in light’. This is the cataphatic way, here combined with the apophatic.