The Scandal of Sickness

When we listen to requests from Christians and the reasons why they pray, we see that often the dominant request is for health. Thousands of pieces of paper arrive at the Holy Preparation Table in all our churches, with this declared request. And in our everyday lives as well, when conversation turns to whatever is happening around us, we often end by saying: ‘As long as we have our health, we’ll manage’. It’s a top priority, the request for health. There are also a lot of people who have a confused way of looking at the Church and see it as a sort of extension of magic. They state openly that they go to church so that God will keep them well, viewing Divine Grace as a kind of shield against illness of any kind.

This is where they begin to be scandalized. It seems that the requests aren’t being heard, since the churches are still full of people who are ill, Christians continue to become sick and, in the end, it appears that all these supplications for good health are being ignored. So why is it that, on the one hand, the Church relates the many miracles of Christ which gave health to those who benefited from them, when, on the other it seems that miracles don’t happen today or at least it appears that our Holy God isn’t protecting His people sufficiently well. The answer could be a very simple one. How can we ask for the same as occurred in times past, when people’s true and guileless faith swelled in their hearts and led them to confess it even at the cost of their own blood? Why do we demand miracles when our way of life and the quality of our moral state are such as to preclude them? Let’s not forget that apart from faith, a miracle also requires virtue. 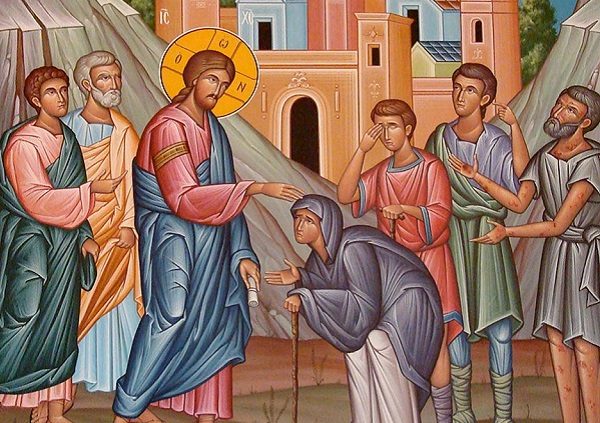 The cure of the woman bent double
The Gospel story of Christ’s healing of the crippled woman provides us vividly with a different and original answer to the question we posed above. The cure is described of a woman who was bent double, that is she was so crippled as to be unable to stand straight and hold her head up. Any attempt to stand up properly brought on terrible pains which severely limited the range of her activities. But the woman wasn’t ashamed to be seen in this condition. She didn’t hesitate to expose herself to difficulties. In particular, she insisted on going to the synagogue in order to hear the Law of God and its interpretation.

It’s common enough for an illness and its after-effects to affect a patient’s psychology in a detrimental manner, leading them to be ashamed of their body and depriving them of the will to live. If such patients don’t have sufficient reserves of resilience, which are increased mainly through faith in God, they can end up in pathological circumstances, even extreme situations, with the result that their life becomes even harder, both for themselves and those close to them. Not infrequently, such negative thoughts are encouraged by society itself, when it’s dominated by unacceptable notions of worship of the Nietzschean superman; when it’s petty in its dealings with patients, demeaning them and treating them as a burden; when it closes its eyes hypocritically to pain, refusing to prepare its members for dealing with it, proclaiming instead the vain pursuit of the forlorn hope of complete happiness in earth.

The crippled woman in the Gospel didn’t behave like this, however. She confessed her faith and hope in God in particular through what she did, that is by struggling painfully to attend divine worship, to share in it and draw strength from it. We don’t know the content of her prayer, what kinds of requests she made or even her complaints. It’s not often that people who are ill are also quiet. When they are, it usually implies a reserve of spiritual strength which dictates that they shouldn’t weary other people but rather that they should bear the cross of sickness courageously and by themselves.

Jesus Christ, the ‘physician of souls and bodies’
Christ, on the other hand, acts completely differently. He sees the crippled woman and interrupts His sermon, an indication of the interest of the Creator in His creation. The woman neither spoke to Him nor asked for anything, but Christ placed His hand on her head and told her that she was free of her infirmity. Nobody had asked Him for anything, but Christ acted as a benefactor anyway. This is also the way in which our saints act today, even towards people they don’t know and who haven’t asked them for anything.

In other instances, Christ wanted to inquire about the faith of the person seeking a miracle. He doesn’t do so here, because there’s no need. The woman’s patience in sickness and the consequent sculpting of her soul were more than enough testimony to her complete dependence on God as the only One capable of providing not only healing of the body but also the sanctification of the soul. This is why He Who knows so well the innermost secrets of our hearts and can discern pure and unselfish love for Him, can distinguish not only our every need but is also able to intervene for our spiritual welfare and give each of us precisely what it is we need.

My brothers and sisters, the saints of our faith often treat any ailment in their life as a visitation from God, as an opportunity for more intense and fervent prayer, as an inducement to patience and, consequently, as a blessing. Their example is there for us to learn how we can take incentives for practical philosophy and theology from difficult circumstances such as sickness. In this way we can draw even closer to God, understanding better His almighty divine power and our own human weakness. We can appreciate that our true homeland is the Kingdom of God, not this earth, and that our eternal inheritance is restoration to the embrace of our God and Father. Amen.