Life and Time according to Basil the Great

Basil the Great experienced the relationship between time and life and presented it in the most penetrating manner in his written works. His teaching on the subject, which had a profound effect on later theology and thinking in general, is still remarkably topical today. It is true that this great hierarch from Cappadocia did not write any systematic work on the matter, but in his interpretation of Scripture, and, in particular, the ‘Six Days’ of the Old Testament, as well as his rebuttal of the Eunomian heresy concerning the person of Christ, he often referred to time and the issues related to it.

We usually divide time into three parts: the past, present and future. But this tripartite distinction seems not to have any real objective existence. In fact, if we want to define the present objectively, we shall see that it is nothing more than the dividing line between the past and the future. So a tripartite division of time automatically becomes bipartite. This is why Aristotle talks about only two dimensions of time, the past and the future: ‘Of time some parts have been, while others have to be, … for what is ‘now’ is not a part: a part is a measure of the whole, which must be made up of parts. Time, on the other hand, is not held to be made up of ‘nows’ [1]. 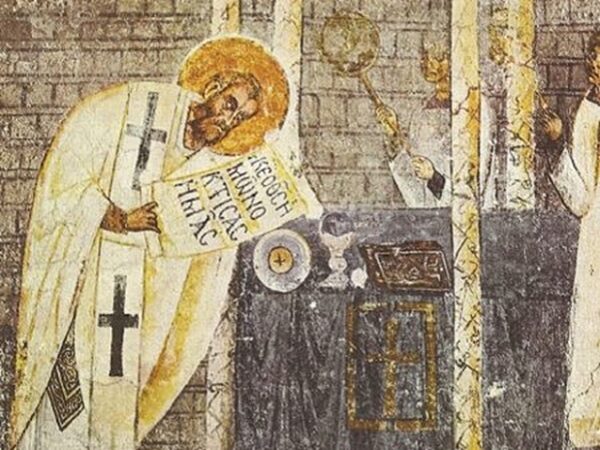 Of course, this position seems to be entirely theoretical, because it is not possible for there to be real time without the ‘now’, that is the present. But the present cannot be understood as temporal duration, because, of necessity, that implies past and future. This is why we can say that the present is not a time, but is rather that infinitesimal or indivisible moment which separates the past from the future. And although this moment of the present is, in reality, all there is, it is elusive because, as a matter of course, it recedes into the past.

And while the present is a fleeting and elusive moment, neither the past nor the future belong to us. The past is lost, and the future is not at our disposal. As Saint Basil says: ‘Is time not thus: the past is no more, the future does not yet exist, and the present is not observable before it is recognized?’[2]. But we do not experience time solely as isolated moments, but as a broader continuum, made up of all the ‘presents’ and embracing both past and future. By remembering and expecting, we transcend the moment, and experience the present as a transcendent composite of the past and the future. In this way, the present in our life is shown to be a transcendence of time and an indication of eternity. This is why ancient Greek mythology attributed a supernatural dimension to time and personified it as the god Cronus, who exterminated his children.

According to Basil the Great, time is the ‘co-expanded dimension in the composition of the world’ [3]. ‘Dimension’ here has a temporal meaning, with qualitative, or, more accurately, moral significance. It denotes the duration of this present life, in contrast to that of the future. It is the time of changeability and peril, in contrast to the stability and security of eternity. But it is also, for precisely this reason, the only time when we, as people, can prepare for eternal bliss [4]. In this way, time becomes a juncture, that is an opportunity for us to acquire eternity, or, as Elder Sophrony writes, a ‘locus’ where we encounter God and our immortality.

Time is linked organically with space and cannot be understood without it. It was created instantaneously. In other words, both time and space were created outside time, by the will of God. This is how Basil the Great interprets ‘in the beginning God made the heaven and the earth’ [5]. He observes that, just as the beginning of a road is not yet a road, nor is the start of a house yet a house, so the beginning of time is not yet time, nor even a part of time. If you were to claim that this beginning were time, you would be able to divide it, also, into a beginning, middle and end, which is impossible [6].

In its linear course, time contains unceasing temporal cycles, which are a depiction of eternity. So the flow of time takes on a spiral form, which alludes to eternity. In any case, the course of time is inherent in the world and with the things therein. It is a constant companion and is never absent.