The Angel of the Wilderness

The life and activity of John the Baptist and Forerunner is an enduring testimony in Christ, culminating in his martyrdom for Him. Just as then, when he was active in the wilderness of the Jordan, so today his voice can be heard in the wilderness of our society, since although we now have everything and live with other people all around us, we’re still far removed from God and our neighbours.

John was the first light announcing the coming of the day of the Lord and preceding the rising of the Sun of Righteousness. ‘The voice of one crying in the wilderness: “Prepare the way of the Lord”’. In the desert, this charismatic man, who proved to be ‘the greatest among those born of women’, preached in advance the message of Christ’s Gospel in only a few words: ‘Repent, for the kingdom of heaven is at hand’. Entry into this kingdom, therefore, depended on the advent of the messiah Himself, as the agent and founder of this kingdom within history. The coming of Christ and His kingdom into the world, however, also required repentance and our return to the true faith. In this way, then, the Forerunner became the preacher of repentance and a witness to the coming of Christ. 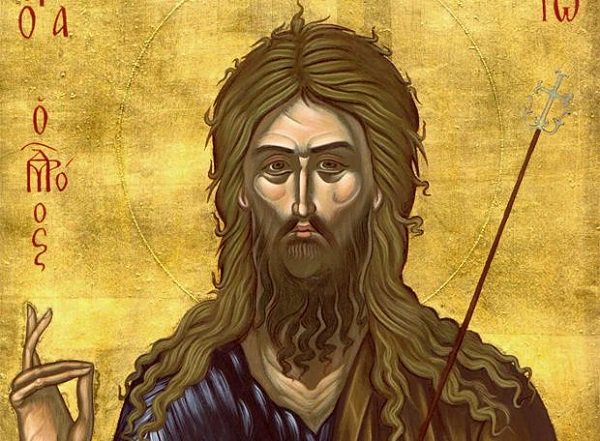 The Honorable Forerunner prepares the coming of the Lord and proclaims, in brief, the dimensions of His redemptive ministry. This preparatory task of John’s was sanctified and affirmed by the Triune God on the occasion of the Lord’s Baptism. John’s witness is the voice of the Church itself, which helps people to recognize the Messiah in the person of Christ, even within the dry and arid wilderness of the present world.

There was no lack of censure in John’s preaching as regards the secular rule of Herod Antipas, because of the latter’s immorality, his departure from faith in God and also for the ways in which he exploited his people and treated them unjustly. He abused his power to their detriment. Moreover, John did not neglect to castigate the Pharisees and Sadducees for their corrupt misuse of their privileges and for their religious hypocrisy.

In discussing the Forerunner, mention must also be made of his ascetic way of life in the wilderness, which indicates and proves to us today that we can live well with little, without recourse to consumerism and the material way of life of most people, even in the crisis we’re going through at the moment. This is a crisis which has led to the deification of matter and of the ego, since we believe we’re capable of doing everything and having everything without God or other people, just by looking after ourselves. This is a crisis which has led to our self-declared autonomy from God and our neighbor, a crisis which, in reality, is due both to corruption- because this undermines the economic sector- and also to the immorality of society today.

In his preaching, John made a call for repentance, for people to become aware of their guilt and sins and to confess them. Through his preaching, John’s call for people to turn back through repentance, in other words to change their way of life and thinking from immorality to morality, from hatred to love, from envy to love and therefore to a return to communion with God and other people, is his enduring testimony. This is testimony in human history about the true God, about real life, a life of love in Christ, that is with Christ and for Him, which depends on our relationship with our neighbor, whom we may regard as our brother or sister, though also as our enemy. 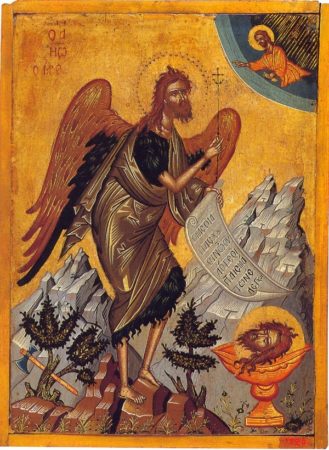 The Lord’s admonition ‘Love your neighbor as yourself’ means that we should see these neighbors as an extension of ourselves. So we should be concerned that all people will saved, will come to God, will be cured of their passions and weaknesses and will be restored, be filled with peace and joy, because the whole world is our self and our self is the whole world.

The life and ministry of John, then, is a testimony and enduring reminder of the way in which we’re called to live as children of God. In the wilderness of life, we’ll be challenged to deal with some Herod, some Herodias, some Salome, in other to words to face the emptiness of this world, the passions, the sins, the delusions of the devil which seem to be divine, sweet fruit, but are, in reality, bitter to the taste and harmful in the extreme.

But we are not defenseless nor alone in the face of all this: we have Christ as our Guide, Who is also our Physician and Salvation. If we live for Christ and for our brothers and sisters, we’re armed with the grace of God, we fight against sin and against the evil in this world. If we experience this love, we come to death, to martyrdom for Christ and also for the defense of our neighbor, and then our suffering becomes witness.

Just as John wasn’t cowed at the prospect of his own martyrdom, just as he didn’t compromise, so, too, are we Christians called to continuous testimony and suffering. Martyrdom of blood and of the conscience. Our life as Christians is one of constant struggle for perfection in Christ, in which we fight against the everyday problems and difficulties of this life, the temptations, the passions and sin.

The Church urges us to attend to ‘the voice of one crying in the wilderness’ and to ‘prepare the way of the Lord’ so that the desert, the society in which people live today, may bloom and that each of us may experience the Kingdom of God even in this life and may inherit it after the Second Coming of the Lord, as a reward for our life in Christ and for our spiritual struggle to grow in His likeness.