Every day, a task is performed on earth. It’s the greatest, most important, most sacred task that humans can aspire to. It’s the Divine Liturgy, the continuation of the Last Supper at which Jesus sat with His disciples. People are capable of carrying out many great feats, but none is greater or more important than the Divine Liturgy.

This is the one privilege God gave to us humans, because even the angels can’t celebrate the Divine Liturgy. At the Divine Liturgy, the angels serve with people, as we hear in the tropario of Saint Spyridon: ‘And in the singing of your holy prayers you have angels celebrating with you’. Indeed, as Saint Peter says, ‘even angels long to look into’ what the hands of the priest perform on the holy altar. 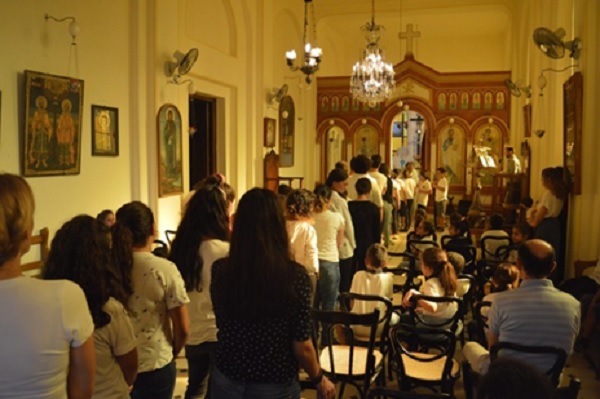 It’s not easy to say what the Church is, but we understand and live it when we celebrate the Divine Liturgy. When we’re in Church during the Divine Liturgy, we don’t simply watch what’s happening, like spectators, but instead we’re all celebrating together. We’re the people of God and we celebrate the Divine Liturgy together with the ministers of the Church, who, through their ordination, have the grace of the priesthood. This is why all the prayers and all the hymns at the Divine Liturgy are written in such a way as to make it clear that it’s not just the priest who’s celebrating, but all the Christian who are present in church. ‘Let us pray to the Lord’, says the deacon; and ‘Let us attend’. This is said for all the people because we’re all the Church and we all perform the service. 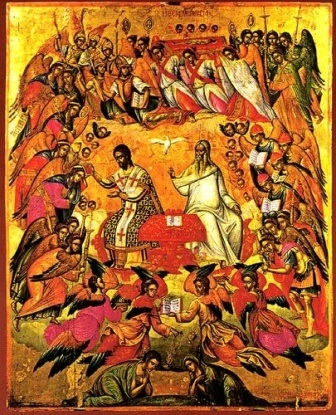 The Divine Liturgy or Eucharist is the same sacrifice as Jesus Christ made when He offered Himself for the salvation of the world. On the evening of the Last Supper, He broke the bread, gave it to His disciples and said: ‘Take, eat; this is my body…’ He then blessed the chalice, gave it to His disciples and said: ‘All of you drink from this; this is my blood’… Both times, He spoke clearly and meant literally what he said: ‘this is my body’ and ‘this is my blood’. However, He didn’t merely assure them as regards this, but gave them a command, as well: ‘Do this in remembrance of me’. So now the Church fulfils this command of Christ’s by celebrating the Divine Liturgy and continuing the same sacrifice and the sacrament of the Divine Eucharist.

Within the words Jesus Christ spoke to His disciples are both the continuation of the sacrifice and the communion of His body and blood. So the Liturgy or Eucharist is not only sacrifice and remembrance of the Last Supper, but also the communion of the faithful. The Church celebrates the Liturgy and continues Christ’s sacrifice in order that we can partake of His body and blood. When we talk about Christ’s sacrifice we mean His death on the cross, but also His resurrection three days later. When the Divine Liturgy is celebrated, the priest says a prayer which includes the words: ‘we proclaim His death and confess His resurrection’. At the Last Supper, when Jesus Christ instituted the sacrament of the Divine Eucharist, He spoke about His death and resurrection. About His holy body which would die on the cross and about His precious blood which would flow from His side. About the body He’d taken at His incarnation which, in three days, would be raised incorrupt and immortal. That which is now given at the holy sacrament ‘as food for the faithful, for the remission of sins, and for life eternal’.

Our mind can’t encompass everything that happens at the Divine Liturgy, which is why we have to have faith and experience it within ourselves. It’s always a greater thing to experience something within ourselves than it is to understand it drily with our mind. The Divine Liturgy isn’t a dead but a living practice of the Church, and the better we understand it the more vitally we participate in it. Not when we watch what’s happening in church as if we were spectators, but when we take an active part in it. Let me repeat and say again this basic truth and divine reality: the Church isn’t something foreign which is outside us, something that functions on its own and we happen to attend the Liturgy. When we congregate, we’re the Church and we celebrate the Divine Liturgy every time.