The New Martyr Athanasios from Limnos

He was born on the island of Limnos, and, as a young man, went to the Holy Mountain, where he was placed under obedience to an Elder of the Great Lavra. During the Greek revolution, he was taken prisoner, carried off to Egypt and enslaved to a Muslim potentate, who circumcised him and married him off to a Christian woman, who was also a prisoner. 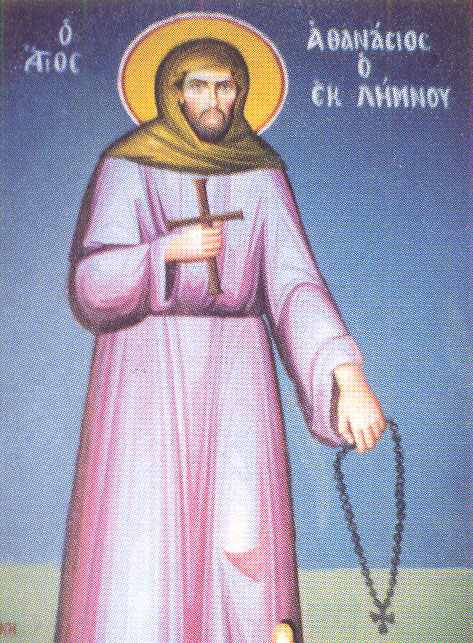 After dramatic spiritual experiences- ‘the great Saint Athanasios appeared to him two or three times- his wife agreed to a ‘a God-pleasing settlement’ and he ‘receiving zeal upon divine zeal’ returned to the Holy Mountain, where ‘he cleansed himself through extreme asceticism and much humility’. He lived in the kelli of Saint Anthony at Karyes, on the site where today the Skete of Saint Andrew stands. After he’d been re-chrismated and had had confession he left to go to his home island, living ‘in a devout and God-pleasing manner’.

He was arrested there by the Muslims and, after being tortured, was drowned in the Hellespont.

His memory is not recorded in the Lives of the Saints. His short Life is recorded in a codex of the Athonite monastery of Saint Panteleimon. He is honoured with other saints from the island of Limnos on the second Saturday of the month of July. A service in their honour was written by Hieromonk Athanasios from the Holy Monastery of Simonos Petras. He is honoured with the rest of the Holy Athonite Fathers.