The healing of the blind man in Jericho is the last of the miracles recorded by Saint Luke before Christ’s entry into Jerusalem and his impending Passion. It may be no coincidence that, on Great Friday, the hymnographer has Christ express the bitter complaint which begins with the words: ‘My people, what have I done to you?’, says the Lord. ‘How have I grieved you? I gave light to your blind… What have I done for you and how have you repaid me?’

The solid food of pain
Christ was crucified for blind, poor and ungrateful humanity. This is why he came. To illumine us with his light and to enrich us from the inexhaustible treasury of his gifts. He didn’t impose these gifts on us, however. You can’t force something on people who boast that they’re already rich and have no need of anyone else, even if, in reality they’re wretched, miserable, poor and blind. All you can do is advise them to put a salve on their eyes so that they can see (Cf. Rev. 3, 17-18). 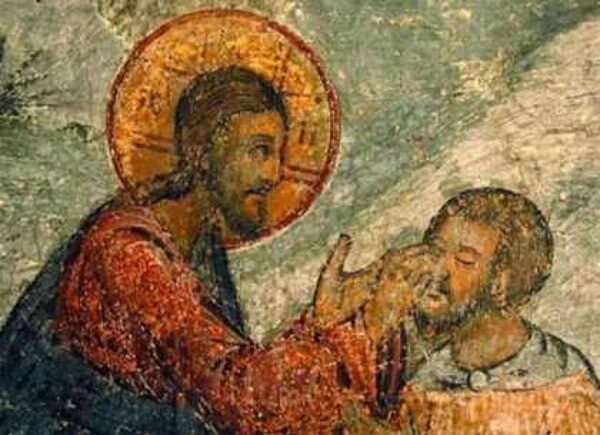 It appears that the blind man in Jericho used just such an ointment, because he was interested in learning God’s law and the words of the prophets. He was therefore under no illusions of self-sufficiency or bombast, which, of course, is not true of all the people who are afflicted. Strange as it may seem, it’s not uncommon for trials to produce pride and to lead to a brazen and aloof attitude; sometimes even to blasphemy. The solid food of pain nourishes healthy stomachs but causes nausea to those that are disordered.

The blind man certainly had a sound stomach. He’d allowed his pain to nourish him and mature him to such an extent that, when he was told of Christ’s teaching and miracles, he recognized the Lord as the Messiah in person. This is why, when he heard that Christ was passing along the street where he was begging he began to shout: ‘Jesus, Son of David, have mercy on me’.

Working together
But his shouts bothered the crowd. It wasn’t right for someone whom Jewish society looked on as unclean to cause such a ruckus. They also felt chastened that this rejected blind man- unlike most of the rest of them- saw the Messiah in the person of Christ. Whereas they said to him simply ‘Jesus the Nazarene’s passing’ he called him ‘the son of David’. They all knew that the Messiah would be of David’s lineage, but they weren’t all convinced this was the anointed one, the long-awaited Christ. There were some who wouldn’t hear of it. In any case, the cries of the blind man annoyed them, so they told him to be quiet. He paid no attention, however, and started shouting all the louder.

His firm and ardent faith moved the Lord and he asked that the man be brought to him. In order to make the crowd realized that the man wasn’t begging for money, but rather for his sight, Christ asks him: ‘What do you want me to do for you?’. ‘I want to see again’, the blind man replied. In his authoritative way, the Lord says: ‘See again’. He sends him away after praising his faith: ‘Your faith has saved you’.

The salvation of the blind man isn’t merely the healing of the eyes in his body. Saint Cyril of Alexandria stresses that Christ freed him of double blindness: ‘that of the body and that in the mind and heart’. The cure of his bodily ailment is exclusively a gift of God. The healing of spiritual blindness, however, requires our willing co-operation. It requires an ongoing effort towards cleansing and repentance. Which makes us receptive to divine illumination. It’s no coincidence that in the Old Testament the term ‘the sighted’ referred to the prophets who saw God.

Why do the sighted bother us?
The mere fact that some people see God clearly and walk in his light is – unintentionally- annoying to those who ‘prefer the darkness’ and ‘in doing evil, hate the light’ (Jn. 3, 19/21). The life of the ‘sighted’ is a rebuke for those who have gone astray in the darkness. This truth is described symbolically in H. G. Well’s story The Country of the Blind. A young man finds refuge in an isolated village inhabited by people blind from birth. They soon realize that his habits, his actions and his general behavior are very different from their own way of life and this begins to bother them. So they have him examined by the tribe’s doctors. The senior one declares his diagnosis as being that the man’s brain has been affected by the strange things he has in his eye-sockets. He proposes to remove them through a surgical operation so that the man can become a normal, law-abiding citizen.

This myth appears in a variety of forms in world literature and essentially confirms what we read in the Wisdom of Solomon (2, 12-15): ‘Let us lie in wait for the righteous man, because he is inconvenient to us and opposes our actions; he reproaches us for sins against the law,
and accuses us of sins against our training. He professes to have knowledge of God,
and calls himself a child of the Lord. He became to us a reproof of our thoughts; the very sight of him is a burden to us, because his manner of life is unlike that of others, and his ways are strange’.

For us, may the sighted and righteous be not merely useful but also a trustworthy guide. Only then will we be able to sing with the sighted prophet David: ‘I am a companion of those that fear you and keep your commandments… Unveil my eyes and I shall understand the wonders of your law’ (Ps. 118, 63/18).