Miraculous appearance of Elder Ioakeim, the new builder of the Monastery of Grigoriou to a young man who wanted to become a monk

An old monk by the name of Ioakeim, from the Monastery of Grigoriou, writes:

I’d made my final decision and left secretly for the Holy Mountain. The journey was uneventful. I passed through and visited a lot of monasteries and sketes and carefully studied the way of life in each. Having collected much valuable information I decided to become a monk at the Holy Monastery of Blessed Gregory.

Before I entered the monastery, I was very tired, so I went to lie down in the shade in a place that was both sheer and hard to reach, just above Yiftario. But I couldn’t get to sleep no matter how I tried. 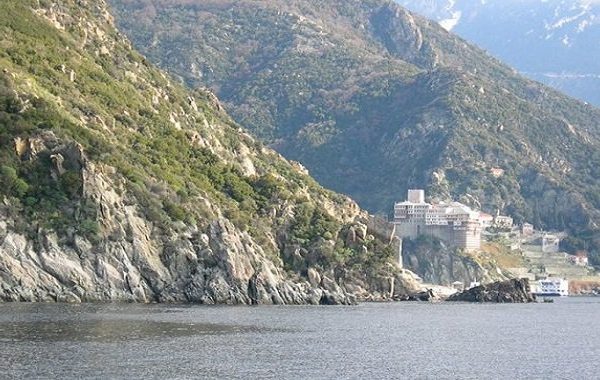 Sleep wouldn’t come. One flight of the imagination after another, one thought after another. The devil was working methodically to tempt me in every possible way.

In the end I was exhausted from this spiritual struggle and I thought that sleep would finally come. But then, what did I see? An ancient-looking monk with a venerable, imposing and Biblical appearance, with a beard that came down to his knees, looked at me cheerfully and said:

‘What are you doing musing out here, son, beset by your thoughts? Get up and go to the monastery’.

I did as I was told and got up, intending to ask him to take me, but where was he?

Nowhere to be seen!

I was shaken by what had happened and asked myself who this mysterious elder might have been, who at his great age had managed to get to that inaccessible place when I’d barely been able to reach it myself.

With these thoughts in my mind (the previous unruly, satanic ones had dispersed like smoke), I hurried off to the monastery. Once there I presented myself immediately to the holy abbot. I told him my intention and desire and also related what had happened with the venerable elder.

Visibly moved, the abbot took me to an icon and asked: ‘Is this the elder who presented himself to you?’ ‘Yes, it is’, I answered, in amazement.

It was, indeed, Elder Ioakeim, the new builder* of the monastery.

The ‘builder’ of a monastery is not necessarily the ‘founder’. Thus the Holy Monastery of Grigoriou was founded and built in 1310-1314 by Saint Gregory the New, a disciple of Saint Gregory of Sinai. In 1761, a large part of the monastery was burned down in a great fire. It was rebuilt by the sacristan, Elder Ioakeim (known as Longbeard). He also built the main church on a larger scale than the previous one and it survives to this day. Apart from this, he built the south wall and extended the grounds of the monastery out past the old east wall. Hence his title of ‘new builder’ [WJL].