The nature of the love of God is a crucified love. Without crucifying ourselves, we cannot acquire divine love which has this character. When we give ourselves to prayer of repentance, we sometimes come to experience this divine love to a certain extent, but in order to keep it in us we need again to be crucified. The greater the love the greater the crucifixion needed in order to maintain it. The Cross in the life of the monks is the love for our brother, to love our brother is our life, to protect him, defend him, help him and pray for him as for ourselves. The love of the brother is the applied love of the Father and of the Son and of the Holy Spirit in the life of the monks. If we have spent many years in the monastery and yet we have not come to love our brother as our life, that means we have done nothing. 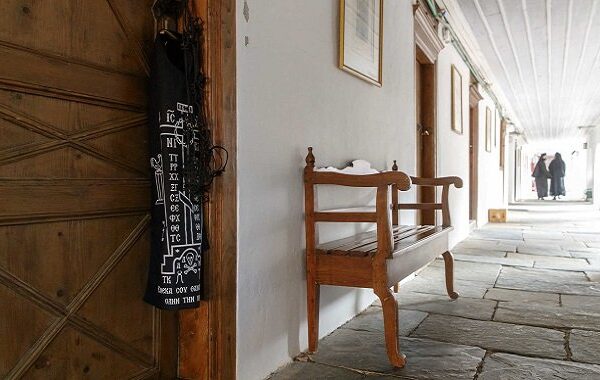 Monks are people of gratitude. A monk will never forget even the slightest favour done to him. Gratitude is the hypostasis of a monk; it is the health of the soul, and that is why it is so difficult: out of the ten lepers, only one returned to give thanks. Only one was truly healthy (see Luke 17:12-17). Thanksgiving gives us desire for God. Saint Simeon was preserved by his desire to see God. Both he and Prophetess Anna were ‘giving thanks’ in the temple. The Greek word ἀνθωμολογεῖτο (Luke 2:38) means to stand opposite, ‘anti’, and make a confession. It is rightly translated as thanksgiving, but it also means standing face to face. She is a ‘κατεντεύκτρια’, like Job (Job 9:17 LXX). ‘Κατεντευκτής Θεοῦ’ is someone who stands opposite God, reasoning and arguing with Him not for selfish reasons, nor for his own passions, but for causes that concern the destiny of the whole world. As there is prayer and repentance for the whole world, so there is also thanksgiving for the benefits of God shed abundantly on us personally and on the whole world. In other words, there is personal and universal repentance and personal and universal thanksgiving. Job was reasoning face to Face with God and he would not accept a moralistic solution to his problem from his friends, the lay theologians, who came to discuss his misery. He knew that he had not sinned against the Lord, that there had to be something deeper in his trials. He struggled to understand the depth of this reason and, in the end, he understood: it was a prefiguration of the Passion and justification of Christ. When he was justified, he said, ‘I have heard of thee by the hearing of the ear: but now mine eye seeth thee. Wherefore I abhor myself, and repent in dust and ashes’ (Job 42:5-6). That is to say, he was regretting that he did not suffer more because he understood that his glory would have been even greater. He understood that this honour was in proportion to the suffering that preceded it. Father Sophrony stated the spiritual law, which says that ‘the fulness of self-emptying precedes the fulness of perfection.’

Question: Why did Father Sophrony have to live for so many years without a guide even though he had received the grace of the perfect?

Answer: The people of God will go through every trial in this world. And the stronger they are in their desire for God, the more severe their trials will be. ‘Mighty men shall be mightily tormented’, says the Old Testament (Wis. 6:6). Father Sophrony told me once that all evil will go through our mind, so that at the end, after we have said no to every evil, , the Lord may remain with us for ever, constantly, definitively. If God sees that man has zeal to go to the end, He will also educate him to the end by allowing him to go through every temptation and every trial, so that there may be no craftiness of the evil one that he does not know. The people of God ‘do not ignore the thoughts of the enemy’ (2 Cor. 2:11), and they acquire this knowledge through experience, though it can also be given charismatically by the grace of God. In fact, I think they both go together. We cannot gain the royal priesthood simply by the grace of God; we must be tried as well.

Question: Speaking about the Nativity of Christ, you say that the human nature is anointed by the Divine nature.

Answer: It means united. The Divine nature unites with the human nature, and once they accomplish this union, all the properties of the Divine nature are imparted to the human nature, says Saint Peter (2 Pet. 1:4). The Word is incarnate, ‘fattened’ with the human nature, and the human nature is fattened with the Divine nature. The fattening of the Divine nature is material; the fattening of the human nature is spiritual. When we live God, we can say that we are ‘incarnate’ spiritually. We are clothed with Divinity, we put on Christ, we are wrapped with immortality. After the Fall in Paradise, Adam saw that he was naked, and was ashamed. Now the new people of God receive a new garment: whoever believes in His Name and is baptized in the Holy Trinity is clothed with the Divine nature of Christ which is imparted to all. For those who are sanctified, the garments of skin are annulled. However, this total sanctification is a rare thing. We could sometimes see this in Father Sophrony: he was incredible, transparent, even when he was ill. I could see that he was clothed with that garment of incorruption. Even his flesh had a different colour and a different character. I was impressed when once he was so ill that he was spitting blood, and for three days he did not lie down in his bed but leaned against the window. Where did he find that strength? He always had a very frail and sickly nature, and yet he had such a supernatural endurance. It is because from his youth he had mercilessly submitted himself to even greater pain than the pain of old age. Therefore, he was prepared.

Answer: That is a difficult question. I think they can come from the mind and even from the heart. If the heart is not enlightened or sanctified, many of these desires that are clothed in bad thoughts come from the heart, as the Lord says in the Gospel: ‘From an evil heart spring forth evil thoughts’ (see Matt 12:35). They may also come through the senses.

Question: At the beginning, when you have the first grace, you really believe that you can change, but somewhere in the middle you see that you have not changed, and you feel you cannot get rid of the old man. What do you do then?

Answer: I had that thought once and I told Father Sophrony, ‘I think I will never change.’ ‘Alright,’ he said, ‘Then let’s throw away the Gospel.’ I remember his word very vividly. I was full of self-pity and Father Sophrony healed me with this word.