The Crisis in Family Life Today
The institution of marriage is everywhere in crisis today. Saint John Chrysostom, whose demise 1600 years ago we commemorate this year, is considered to be the creator of the theology of everyday life. In this article, we present the views and advice of Saint John on the most important aspect of everyday life, the family.

God foreknew what would follow the creation of humankind and so he made us biologically prepared for ‘the communion of marriage’. The creation initially refers only to Adam (1). Saint John remarks that Moses does not use the word ‘made’ when he speaks about Eve, but ‘constructed’, wishing to show that she was of the same substance as Adam, not from something different. So the woman is not lacking anything that Adam has. She’s a perfect human being and equal to him. Because He foreknew the fall of the First-Created, God devised marriage and the need for mutual consolation. 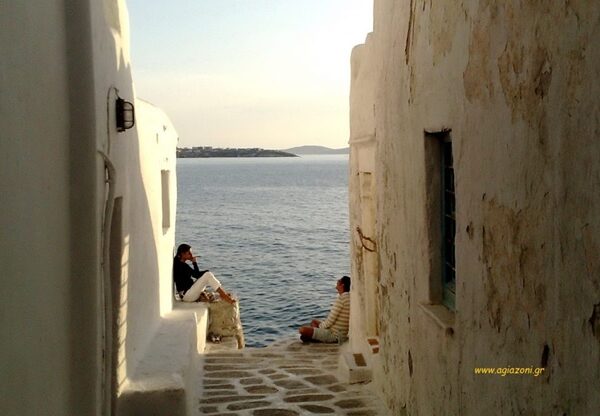 Before their disobedience and consequent expulsion from life in paradise, there had been no marriage. Adam and Eve lived as virgins, in imitation of the life of the angels. Saint John says: ‘The matter of intercourse came after the transgression. Until then they lived like angels in paradise, without the burning desire of the flesh. They were not besieged by other passions nor were they pressured by natural needs, but, because they had been created incorrupt and immortal, they did not even need to wear clothes. Before sin and disobedience entered, they were clad in divine glory, even though they were naked’ (2). The First-Created were unable to preserve this higher form of life for themselves. It appears they were unworthy of the great benefits given to them by God (3).

Things that were redundant before the fall, such as clothes, skills and work, became necessary because of the state of weakness and sickness people found themselves in (4). Marriage has its cause in this sickness, but was created by God (5).

What is the ailment of people after the fall? Chrysostom says that it’s a lack of self-sufficiency. Neither the man nor the woman are ‘self-sustaining’. In both cases, their nature is ‘wanting’, (inadequate). Therefore, they aren’t whole. The one has to complete the other. He says: ‘Since our nature from the Creator became lacking, and is not now self-sustaining, the Lord arranged, in our interest, that this inadequacy be remedied by the benefit resulting from our aggregation. This is why marriage was created: so that what the one lacks may be supplied by the other and our insufficient nature should, in this way, become self-sustaining. We would also have the opportunity, although we became mortal, to preserve our immortality for a long time through our successors (6). In other words, through marriage the husband and wife become joined and are completed as personalities.
In order to prevent the extinction of the human race after the entry of death, our ‘innovative’ God ‘permitted the race to increase through intercourse’. The birth of children, procreation, is a great consolation for our mortality. Marriage is initially the means to ensure procreation. In order to strike at the dread face of death, God granted ‘succession through children’ (7). When the first people had children, they saw the continuation of their life and were consoled over their death. Procreation is considered the prime reason for marriage. Saint John also remarks that, after Christ’s resurrection, through which he destroyed death, there was no longer any need for the consolation of procreation. Our consolation now is the expectation of personal resurrection and the inheritance of the Kingdom of God, which demand restraint and virtue.

As do all the Fathers of the Church, Chrysostom accepts that intercourse has a place only within marriage, not outside it. According to him, those who undervalue (mock) marriage are acting in a ‘satanic’ and ‘inhuman’ manner and are scorning God’s gift, the root of our own genesis (8). In his commentary on Genesis, the first book of the Old Testament, he says that ‘intercourse’ is not in itself sufficient for the birth of children. God’s help is required: ‘the assistance from above which moves our nature to reproduce’. Marriage does not in itself produce the birth of children; this is effected by the word of God Himself, Who says ‘Go forth and multiply and fill the earth’. This is demonstrated by all those who have contracted a marriage but have not become parents (9).

After the fall, people did not lose the divine gift of freedom to choose between good and evil. According to Saint John, this gift has to be exercised within limits, within reasonable bounds. Otherwise, it’s drawn away into sin, though in itself it’s not sin. The reason for marriage is to be found in this ‘excess’, this trespassing of the boundaries, this unbridled desire. In marriage, people remain within the boundaries and desire doesn’t become sin. ‘Because desire entered, marriage also entered, restraining excess and constraining men to being devoted to one woman’ (10). Outside marriage, if desire is realized, it’s expressed as fornication, adultery or homosexuality.

If there is no restraint between the spouses, the marriage isn’t honorable. ‘How is marriage honorable?’ The answer: ‘When faithfulness is retained with restraint’ (11). Because the ‘inflammation of the flesh’, the passions of the body, are so powerful that they’re a hindrance to restraint, marriage is promoted as an antidote to fornication. His words introducing the ascetic aspect of marriage are particularly apt. Marriage is not there for sexual assault or fornication, but for restraint (12). He goes on to say: ‘So there are two reasons why marriage has been adopted: for us to exercise restraint and for us to become parents. Of the two, restraint is the more important’.

The emphasis on restraint obviously doesn’t exclude procreation. ‘Coition’ was given ‘for begetting children’. Children are the link, the bridge uniting the husband and wife. Through the virtue of restraint, marriage becomes a calm haven. Peace reigns and there’s a pleasant ambience, with agreement and love between the couple. Marriage, with the everyday concerns of life, is no impediment to the exercise of the virtues. Saint John brings the example of Acylas and Priscilla, the couple who were also holy apostles. Although they were in charge of a tent-making workshop, this did not prevent them from observing God’s commandments as monastics do. If marriage were a hindrance to virtue, then the blame would lie with God Who introduced it. He goes on to say: ‘Don’t consider marriage an obstacle to pleasing God, because if marriage and the bringing up of children were to become an obstacle on the path of virtue, the Creator wouldn’t have introduced it into our life… It’s no hindrance to anything in our Christian life, as long as we wish to strive’ (14). ‘Because if we’re vigilant, if we’re sober, then neither marriage, nor bringing up children, nor anything else will be able to stop us being pleasing to God’ (15).

He does accept, however, that the efforts and struggles that married people have to engage in for their salvation are greater than those of monastics. These greater efforts, however, will be rewarded with ‘brighter crowns’. Provided married people aren’t consumed by the desire for material goods, provided they use these goods and don’t misuse them, then marriage isn’t a hindrance. The impediment lies in the intentions of those who make ill use of marriage. ‘Use marriage with moderation, and you shall be first in the kingdom, and shall enjoy all good things’ (16).