Saint Neilos was born into a wealthy and illustrious family and was probably a pupil of St. John Chrysostom from as early as when the latter was preaching in Antioch. His birth and personal attributes were such that he was raised to the rank of prefect of the capital. The burdens of his office and the social life of the capital, however, conflicted with his desire for a more spiritual life. He therefore came to an agreement with his wife, by whom he already had two children, and both of them renounced the world. He and his son, Theodoulos, settled on Mount Sinai, while his wife and daughter entered a women’s monastery in Egypt. (This sounds strange to modern ears, but we should remember the case of Father Galaktion [†2014] and his wife Epistimi, who had five children before deciding to enter monasteries. Fr. Galaktion entered Simonos Petras on the Holy Mountain and was joined by a son, Fr. Athanasios, now Hymnographer of the Great Church of Christ, while his wife entered the women’s monastery at Ormylia, a dependency of Simonos Petras, where her daughter, Nikodimi, is Abbess. Another daughter, Maria, is married to Fr. Athanasios Ghikas, the priest in charge of Saint Haralmabos’, the monastery’s church in Thessaloniki and one of their daughters is also a nun at Ormylia).

Saint Neilos lived a life of great austerity in Sinai. He and his son spent all their time in prayer, study of the Scriptures, meditation and labours. 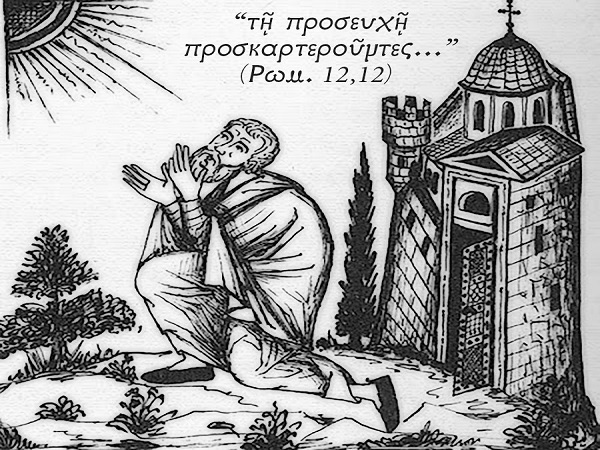 Then Saint Neilos suffered a great trial: Sinai was invaded by barbarians and his son and many others were taken captive and, in fact, it was rumoured that his son had been offered as a sacrifice to Venus, the morning star. Theodoulos later re-appeared in the town of Elusius, having been ransomed by the local bishop, who was preparing him for ordination. When Saint Neilos went there to take his son back, the bishop tried to persuade both of them to stay and serve the Church, but the attraction of solitude was too great and they returned to Sinai, where they remained until they went to their rest in the Lord. In the case of Saint Neilos, this occurred in A.D. 390. His relics were later transferred to Constantinople, where they were laid in the Church of the Holy Apostles, a great honour, given that this church was known as the ‘imperial cemetery’, since it housed the remains of many emperors.

3. Prayer is the mind speaking to God. What state does the mind need to be in so that it’s not distracted, but can approach the Lord and converse with Him, without any intermediary?

4. If, in his attempt to approach the bush in flames, Moses was prevented from doing so until he’d loosened his sandals, (Ex. 3, 5), how do you expect to see God and converse with Him Who is beyond all feeling and thought unless you first loosen and cast away all passionate thoughts?

5. Before all else, pray to receive the gift of tears, so that you can soften the harshness of your soul. Then once you’ve confessed your iniquity to the Lord against yourself [Ps. 31, 5, Sept.], you can receive remission from Him.

6. Use tears in order to obtain every request, for the Lord rejoices greatly when you pray with tears.

7. If, when you pray, you shed floods of tears, do not exalt yourself, as though you were above many other people. It’s simply that your prayer has received help from the Lord, so that you can eagerly confess your sins and may incline Him to mercy by your tears. So don’t turn this aid against the passions into a passion or you’ll anger God Who gave you this gift.

8. Many of those who shed tears for their sins forget the purpose of them. They feel so inordinately proud of themselves that they then go astray.

10. When the demons see that you intend to pray properly, they suggest thoughts about things that are supposedly important. Then they make you forget, so that your mind tries to recall it. And when it doesn’t, you’re fretful and sad. When you’re ready to pray again, they remind you of the thoughts they’d put in your mind in the first place, so that it once again turns to them and misses out on fruitful prayer.

11. Strive to keep your mind deaf and dumb at the time of prayer and then you’ll be able to pray properly.

12. When temptation befalls you, or you’re irritated by some disagreement, so that you’re angry with someone or feel like expressing yourself too vehemently, then remember your prayer and the judgement that that involves and this unseemly movement will immediately be stilled within you.

13. Anything you do to get back at another person who’s done you an injustice will bother you at the time of prayer.

14. Prayer is the product of meekness and freedom from anger.

15. Prayer is an expression of joy and gratitude.

16. Prayer wards off both sorrow and timidity.

18. If you wish to pray in a praiseworthy manner, deny yourself at every moment. And if you suffer many tribulations, think about the benefit of prayer.

20. If you wish to pray properly, then don’t distress anyone. Otherwise, you’re praying in vain.

21. ‘Leave your gift there before the altar and go; first be reconciled to your brother and then come and offer your gift’ (Matt. 5. 24) and then come and pray without distraction. Because rancour blinds the mind of the person praying and casts darkness over their prayer.

27. If you arm yourself against anger, you’ll never tolerate desire. Because desire brings the material for anger and that disturbs the eye of the mind, and this, in turn, vitiates the state of prayer.

28. When you pray, don’t restrict yourself to external movements, but, with great fear, urge your mind to the feeling of spiritual prayer.

• 31. Don’t pray for your own will to be done, because it certainly won’t be in keeping with the will of God. Don’t pray that things may be according to your desires, for they are not always in keeping with the will of God. Better to pray as you were taught, saying: ‘Your will be done in me’ (cf. Luke 22, 42) And ask this about everything, because God always wants what’s good and profitable for your soul, whereas you don’t always seek it.

• 33. What is good, other than God? Let us, then, leave all our requests with Him and everything will go well. Being good, He’ll certainly grant good gifts, too.

• 34. Don’t be sad if you don’t receive what you ask for from God immediately, because He wants to bring you greater blessing by making you persist longer in your patient prayer to Him. What can be higher than to approach God and engage in conversation with Him?

• 39. In your prayer, seek only righteousness and the kingdom, that is virtue and spiritual knowledge, and everything else will be added to you (Matth. 6, 33).

• 40. It’s right to pray not just for your own purification but that of others, too.

• 42. Whether you’re praying with others or by yourself, try to pray not out of habit, but with feeling.

• 43. A feeling of prayer is a concentration of the mind, united with reverence, with contrition, with the pain of the soul which accompanies the confession of sins, and with sighs which aren’t for show but are inaudible.

• 50. The whole of the warfare between us and the unclean demons is about nothing other than spiritual prayer. Because for them this prayer is very hostile and unbearable, whereas for us it’s salutary and beneficial.

• 51. What are the demons trying to enact with us? Gluttony, fornication, avarice, anger, rancour and other passions. Because the mind becomes weighed down and is unable to pray as it should. Because when irrational passions prevail, they prevent it from moving freely.

• 55. Those who love God talk to Him all the time, as would a child to a parent. And they deflect all impassioned thoughts.

• Extracts from the Philokalia.