What was Christ’s greatest miracle? Most people would say the raising of Lazarus. But Saint Isaac the Syrian disagrees, saying: ‘Someone who is aware of his or her sins and genuinely repents is on a higher level than a person who raises the dead. Raising a sinner from the necrosis of sin is greater than raising the body of a corpse.

Certainly, all the occasions when Christ and the saints raised people in the body are astonishing miracles and are testimony to his victory over death and to the ‘general resurrection’ of our bodies which will be granted to us at his Second Coming. But if we are to share in the eternal glory of his reign, this requires the incomparably more amazing miracle of our resurrection from the death of sin. 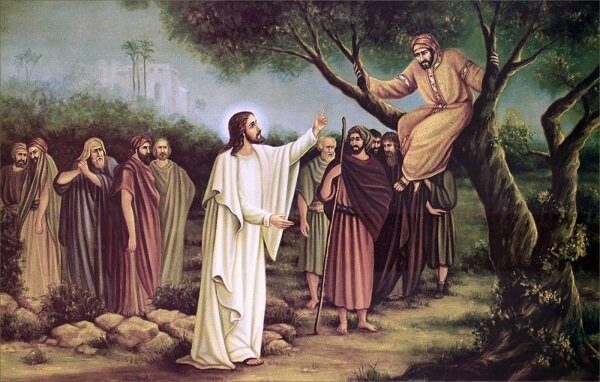 Our input is essential
We see such a miracle in today’s Gospel reading. And we see that, for such a resurrection to be accomplished, the authoritative command of Christ isn’t enough. Lazarus didn’t work with Christ for his resurrection. How could he, in any case, since he was dead in the grave? Christ raised Lazarus because he wanted to do so.

Zacchaeus, on the other hand, worked hard for his resurrection. He started off from the intense desire to meet Christ, having heard that here was someone who at least didn’t see sinners in a prejudiced way. Because of the press of people and because he was short in stature, he climbed a sycamore tree in order to see Christ, ignoring the comments- and perhaps even the scorn- of other people. And it cost him. He imposed on himself what might be the harshest ‘memorandum’ in the history of human economics when he saw the crowd murmuring because Christ had not only turned to look at him but had called him by his name and had invited himself into his house. The ‘memorandum’ involved the distribution of half his wealth to the poor and fourfold restitution to those he had wronged.

The path of repentance
This eradication of the deeply-embedded passion of avarice was the result of Zacchaeus’ spiritual revival and is testimony to the power of his repentance. How was it that a man who was so addicted to money, so obsessed by it that he wouldn’t think twice about swindling other people, could transition from the death of sin to life in Christ?

God doesn’t save us either by magic or by coercion. On the one hand, he awaits our invitation and then our steadfast repentance. Saint Makarios the Egyptian says that no matter how much our souls have been battered by the passions, however feeble we are, however weak our pulse is, we still have the chance to call the real physician. An infant that has yet to take its first steps and is unable to move towards its mother still ‘rolls and screams and cries’ seeking its mother ‘in pain and suffering’.

So Zacchaeus was looking for a ‘maternal hug’. Or rather he was looking for a hug from Christ, which is even warmer than that of a mother. The Lord himself said that even if a mother forgot her children, he would not forget them (Is. 49, 15). This is why the chief tax-collector scrambled up into the sycamore tree: so that the silent cry of his aching soul could be heard all the louder.

The search for the ‘lost sheep’
In an indication that, in essence, he had come to Jericho especially for Zacchaeus, Christ says to him: ‘Hurry on down Zacchaeus. Today I must stay at your house’. In other words what he was basically saying was: ‘You freely opened the door of your heart to me. That’s the most important thing. If you hadn’t responded, I couldn’t have saved you. I need this co-operation. I need your outstretched arm so that I can grasp you and raise you. That for me is an invitation to stay at your house. And when I’m there, you won’t be looking after me. I’ll put on an apron, sit you down to eat and will come and serve you (Luke 12, 37). Today I’ve brought salvation into this house. This is why I came into the world: to seek out and save my lost sheep’.